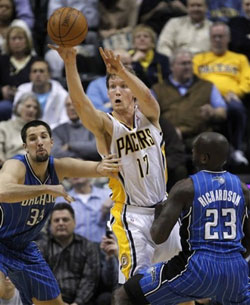 Coming into this game, the Indiana Pacers and the Orlando Magic have a few things in common right off the bat.

First, both teams are still in the process of finding their identity. The Pacers have messed around with the idea of up-tempo small ball for about the last month — not to say that this idea has worked — as they came into this game fresh off of a five-game losing streak that started at home against Chicago and dragged through their (not so difficult) west coast road trip.

Early in the season the Pacers looked like they were turning things around with Roy Hibbert playing consistent ball in the middle. But since that point in time where the Pacers beat the Lakers and Heat on the road, they have turned back into that same old mediocre team (which they have been for quite some time now) that is in dire need of an identity–which they need to find soon if they do not want another one-way ticket to the Draft Lottery.

On the other hand you have the Orlando Magic, who blew their roster a week before Christmas, lost a few games immediately following the trade, streaked nine W’s in a row with their retooled roster (including impressive wins over Boston and San Antonio), and have been in and out of rhythm ever since. Adding Hedo Turkoglu’s playmaking, and Gilbert Arenas’ and Jason Richardson’s scoring abilities, in this writer’s opinion, should prove to drastically help Orlando’s chances in the postseason, as they can spread the floor better and have more options on the perimeter to go along with that guy they call Superman in the middle.

But right now the Magic still have a ton of games to play, a lot to prove, and many areas to improve upon as the season develops.

The other area where both Indiana and Orlando are similar is in their approach — they both like to spread the floor, swing the ball, and take (seemingly) as many open three-pointers as they can. Orlando takes the most threes per game at 25.2, while Indiana currently is in the 4-spot, attempting 22.6 per contest.

So coming into the game, we have an idea of how this one is gonna play out: It’ll probably be a three-point bonanza for both sides combined with a good amount of Dwight Howard in the middle, as the Pacers front line has proven itself incapable of hanging with even the thinnest of front lines.

– Roy Hibbert might as well be a 7-foot tall stuffed animal that is being flat out abused by Dwight Howard in the early going. Howard is off to a 4-5 start with 8 points, 4 rebounds, 2 blocks in the first seven minutes.

– Ryan Anderson hits the first three-pointer of the game for either side at the four-minute mark. 17-10, Magic.

– Jeff Foster plays inspiring defense on Dwight Howard, forcing a kick-out to JJ Redick in the corner, where he misses an open three. Foster proceeds to run the floor hard and finishes strong at the other end, igniting the crowd in the process.

– Orlando catches a quick turnover bug while Paul George capitalizes at the other end, as he was fouled on a drive at the rim and knocked in both free throws. 19-18, Magic.

– Pacers show patience and poise, working the ball from side to side until AJ Price hit a trey from the right side to give Indiana its first lead of the game…until Dwight answered three seconds later with a hook in the lane and Gilbert Arenas knocked home a three-pointer with 1.2 left in the period to give Orlando a 24-21 lead after one.

– Danny Granger triple from the left corner is promptly answered by Ryan Anderson three seconds into the shot clock. Transition defense? What’s that?

– Gilbert Arenas with another triple after some nice movement. Orlando stretches the lead for the first time tonight, 32-24.

– Paul George with a nifty pull-up in the paint.

– Jason Richardson hit a triple from the right side of the arc, Ryan Anderson canned his third of the game from practically the same spot, Brandon Bass received an alley-oop on the break, and then Anderson hit his fourth. All of this scoring happened in 1:24 time and left the Pacers in a 47-30 hole with 7:35 still to play in the first half.

– Danny Granger got an impossible off-balance banker from the free throw line to go, Psycho-T caught a dunk on the break, and Darren Collison hit a pull-up from the right side forcing Coach Ron Jeremy, I mean Van Gundy, to call a TO at the 6:13 mark. (Does that one ever get old?)

– The Pacers continue to let Ryan Anderson look like an All-Star, as he cuts through the lane without being touched and converts an easy layup on the Arenas dime.

– Jeff Foster with some more solid defense on Howard. This time he eats the charge the second Superman lowers his shoulder.

– The majority of the Pacers huddle is looking up at the jumbotron during a timeout as some of the players come on the screen for a comical game called “Name that movie tune.” Down 54-38, should probably have your head in the huddle.

– Granger doing something you’d really love to see him do more of– taking a smaller defender down to the block to make a move in the post.

– A James Posey triple from sraightaway, followed by a Gilbert Arenas traveling violation, and Darren Collison jumper from the free-throw line keeps Indy (somewhat) in the game after two, 62-48.

Three-Point Numbers at the Half: