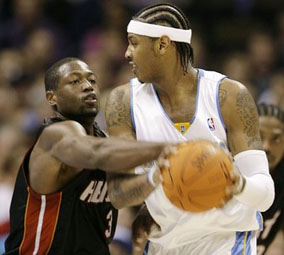 Long-time Links Denver bureau reporter Cub Buenning was in attendance at the Heat-Nuggets game this past Saturday night. This his his report:

Just a month into the season and the league’s top scoring tandem just happens to be the young duo of Carmelo Anthony and newcomer, J.R. Smith. Melo has led the league this year at a 31+ point clip and Smith has been a huge surprise for the second-place Nuggets, chipping in almost 17 per. Friday night, the Nuggets welcomed in the defending champion, Miami Heat, who have done little this season to remind their faithful of their title run of last June. ESPN cameras and a sell-out crowd of 19,155 witnessed a rewrite of the team’s record books, as Smith and Anthony combined for an outstanding 69 points in the Nuggets’ 123-107 win. Paced by Smith’s 7 first-half 3-pointers, Melo’s 32, 9, and 5 night, and 20 dimes from Andre Miller, the Nuggets reached the century mark with 2 minutes left in the third quarter and looked destined to creep on 140. The visitors were visibly hampered physically after their overtime win the night before in Sacramento, not to mention the mile high air’s effect on a largely geriatric line-up. The Heat were led by Dwyane Wade’s 21 points and 14 assists, but SI’s Sportsman of the Year never seemed to get on track all night long.NOTES:

The Heat brought more than an 8-10 record to Denver, as their collective bling was on full display. Play-by-play guys and many of the coaches were noticeably leaning to one side, as the championship rings were a tad on the gaudy side.

The Allen Iverson-trade discussion was rampant through out the arena for the entire night, as the Nuggets are one of the teams that have been mentioned for a possible trade for the Answer. Rumors of Miller, JR Smith, and a first-rounder seem a bit stiff for the aging and recently oft-ailing superstar. Although, having the league’s top two scorers on the same team might be interesting.

I love seeing the old reunions that inevitably happen on NBA hardwoods around the league. Tonight’s best was probably ESPN’s Bill Walton talking on the court before the game with Heat assistant, Bob McAdoo; two titans of the paint, no doubt. On the flipside, Rick Barry was of course lingering around with his two younger sons, as another of his, Jon, worked the broadcast alongside Walton. For some reason, it just always looks like he is annoying and bugging whomever he is talking to.

During the game’s first two minutes, the now notorious group behind the visiting bench (right where I normally sit) began giving former Nugget, James Posey, the business. Compounding their ire, was the fact that Posey would not sit down and was making vision on one end of the court tough. The normal, “sit down, you sucked when you were here,” and “c’mon Posey sit your sorry ass down,” rained down on the 7-year vet, but he ignored them all. That is, until an early stoppage of play, and he turned around calmly and pointed to his hand, “YEAH, BUT I GOT A RING NOW!” Touche.

The Nuggets somehow were able to coerce two technicals plus an ejection from the Steve Javie-led crew—yeah, somehow—in just the game’s first 12 minutes. Although Javie was personally guilty of the short-leashed whistles on Nene and Anthony, respectively, it was Javie’s partner, Scott Wall who tossed Marcus Camby for inadvertently toppling over Coach George Karl’s courtside bin of throat lozenges. The infraction was classified as ‘throwing objects onto the floor or into the crowd,’ which was absolutely ridiculous, although the ejection did seem to ignite the home team and their fans. It also inspired a mid-50ish-looking woman in a huge Nuggets’ starter jacket to scream, “JAVIE, YOU SUCK!” This is a well-educated bunch out here in Colorado, mind you.

At the first quarter intermission, I was frozen in my track towards the bathroom, when Curly Neal, yes, THE Curley Neal unloaded his timeless bag of hoops’ tricks on the Pepsi Center faithful. As Neal left the court, he looked towards the Heat bench and exchanged nods with McAdoo.

The Nuggets’ 74 first-half output outscored the Bobcats’ entire point total for their loss to Houston. Melo and JR Smith’s 47-points first-half points actually outscored almost half of the 24 teams in action on Friday.

Postgame in the Nuggets’ locker room was a jovial place, as the fellas savored the well earned victory. Melo was trying to determine the start time of the Nuggets’ Saturday tip in Dallas the following night and ascertained that it was on NBATV and therefore should start at a certain time. Quick check on a team blackberry, and Melo’s guess was determined correct, which inspired this extremely humorous rant to no one in particular, “
“I need a percentage of Altitude (the team owned network which broadcasts the Nugs.) I need some of that stock! Some stock in Altitude!”
Melo is truly a funny and genuine cat.

Meanwhile, the third-year high-school product, Smith, was set on trying to make plans for eats before they had to board their plane for Dallas. As JR finished his media blitz, he yelled out to his buddy, who had by now made it into the showers.
Smith, “Yo, Shorty! You want to hit up that KFC!?!?!”
Melo’s voice from the shower area, “HUH?”
Smith, “KFC!”

This brought Anthony out of the showers midstream, still soaked and toweled, “You want some? Wings! I want some of them wings!”
Millions of dollars in these guys’ pockets, but all they want is some of the Colonel’s original recipe. After the chicken run was decided upon, Smith came back into the main part of the locker where Nene had adopted the journalistic hoard.
Smith loudly proclaimed in Poltergeist fashion, “NENE!!!!!! HE’S BACK,” which drew the Brazilian’s Million-Real smile.