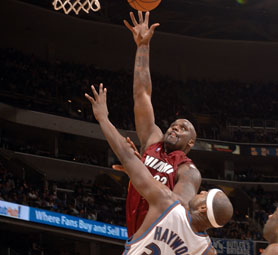 The last time I saw the Heat and Wizards play, the Heat were Shaqless and Wadeless, got off to a slow start, picked it up defensively but fell to a surging Wizards team who were at full strength. Tonight the defending champs are still Wadeless (although he made it to the Whitehouse he didn’t seem to make it down the street to the Verizon Center) but Shaq is back and ready to play some big minutes. The Wizards, on the other hand, are really ailing, missing two-thirds of their high scoring trio with Caron out with back spasms and Antawn still shelved.

My night started off with me glancing at a flyer stating backup center James Lang had been waived and that they called up an NBDL player to take his spot. Not really a major thing when you read it on Espn.com or whatever but when you come through all the time it’s kinda weird. It’s like going to work and finding out they got rid of the funny intern. I hope he didn’t take Deshawn Stevenson up on his offer to lease his Excursion for $1,500 a month. He’s gonna need that money now.

As when most teams with star power come through the press room is lively and full with writers like Wilbon, Aldridge and a few Sports Illustrated guys making the rounds. I grab a quick bite and then head to my seat for tip-off. Cal Ripken’s in the house. He’s making his Hall of Fame rounds throughout the area popping up at a bunch of sporting events. They bring him out for the ceremonial tip-off. Now here comes the real tip.

-Mr. 50 starts the game off hitting an easy jumper over White Chocolate.

-Haslem hits a jumper on the other end.

-Blatche is wide open but travels before he can throw down the dunk.

-J.Will hits a three and then Stevenson comes back with a J.

-Heat finally go into Shaq who finds Haslem out of the double team.

-Blatche hits his first while Gilbert has yet to take a shot.

-Kapono hits off the screen.

-Nice pass from Deshawn to Haywood for the dunk. 9-8 Heat.

-Arenas takes his first shot, a three-ponter that clanks on the side of the rim.

-Blatche comes up short but got Shaq with a good up and under. He’s definitely looking more comfortable out there these days. That happens when you know your gonna get minutes.

-Williams hits another 3 and the Wizards called time. Williams has hit all four of his shots for 12.

-Eddie Jones was definitely a nice pickup for the Heat. He’s playing Arenas well and so far Gil hasn’t gotten his usual calls when driving to the lane.

-Shaq yet to attempt a shot. Scratch that as he just banked one in to cap the Heat’s 11-0 run.

-Haslem extends the run to 13 before Haywood takes his first jump shot of the season! He hits and stops the run.

-The crowd still hasn’t finished filing in and knowing them if they hear the score before they get here they may not even show.

-The Heat are grabbing a lot of offensive boards making it difficult for the Wizards to run and get some fast break points.

-Zo just finished his 3rd awful play in a row. Two were stripped before he went up and the last one I don’t even know what that was but he got fouled only to miss both free throws.

-Stevenson hits and the Wiz are making a comeback.

-Arenas pulls up on Jones and drains one to bring them within 7 at the end of the 1st.

-Here come the Wizards breakdancing crew and I have no comment. Actually I do have one – Why are they breakdancing to rock music? They would later come out and attempt to break to Poison by B.B.D. and then Cooleyhighharmony by Boyz to Men. All you can do is laugh or take Nas’ advice when you find the D.J.

-The Wizards start the 2nd quarter with a full court press which is slightly rattling G.P and Jones. However, they get it across mid court and Jones knocks down a 3.

-They just broke out a huge montage of Deshawn Stevenson’s ‘You Can’t See me’ face moves. That was…ridiculous.

-G.P. is literally hugging Arenas. I guess he really still is ‘The Glove.’

-Antoine Walker hobbles to the rack for a lay-up.

-Zo rejects Songalia and knocks him back, looks at him and then shakes his head saying ‘Don’t try that shit here.’

-Steal and a lay-up for Donnell Taylor.

-Etan Thomas bangs against Zo, hits a lay-up and gives him a stare down as he heads back down court. I don’t know why he doesn’t get more burn. Although he is a bit undersized he gives them a little more toughness. And by all accounts every fan and press member considers Haywood a liability to say the least. At first I felt his length was best for them as he could block shots and get boards but much of the time he just seems in the way.

-Anyway, Zo comes back down and gets a dunk.

-Weak foul on Posey and Arenas gets to the line for 3. Make that 4 as Riley just got T’ed up. I KNOW he’s not complaining about star players getting whistles. By the way Arenas hits all 4.

-Walker alleys to Shaq for a two handed flush.

-Taylor hits a long J to keep the Wizards within 7.

-The crowd’s coming alive but Shaq ends that with another dunk.

-Arenas just threw up an airball. He’s 2-8 so far. He’s definitely gonna need to change his shoes at halftime.

-Shaq is warming up on the block as he hits a baby hook.

-Shaq blocks Blatche and then hits Haywood in the face on the follow through sending him to the floor. That had to hurt.

-Stevenson hits a 3 and turns to the crowd to do a special ‘You Can’t See Me.’ At this point he’s gotta owe John Cena some residuals. Can you patent a move? I think Diamond Dallas Page tried to do that with the Roc symbol. Either way if I was Cena I’d do it just to collect extra checks from Stevenson.

-The next play is classic Jason Williams. He comes down the court and gets bumped falls backwards on his ass, STILL maintains the dribble while sitting on the floor and then throws a bounce pass through one of the Wizards legs ala Magic to Kurt Rambis. That was sick and if Haslem would have made the shot that would have been your Sportscenter ‘Play of the D.A.Y.’

-Kapono hits a three to give the Heat a six point lead.

-Hayes comes back though and hits from downtown making it 62-58 Heat.

-G.P. just got called for his third foul. I didn’t know getting crossed and then bumped while you were still falling down was a foul.

-Shaq then comes down and hits a baby hook on the offensive end and then blocks Songalia on the defensive end. Let em know what’s left in the tank big man!

-They brought out Cal Ripken’s kid to shoot the 3 to get everyone a pizza and after a high bounce it drops! He’s the first to actually hit it this season.

-Posey rips Arenas on one of his last second plays at the end of the third. He takes it to the other end but misses the dunk.

-Low scoring game going into the 4th. It’s 69-65. The Wizards are still in it but Arenas is getting more and more tentative as the minutes pass.

-Shaq hits another short banker as Haywood is playing him one on one every time.

-Songalia takes it on Walker to make it 73-69 but is then stripped on the next play down.

-Arenas is totally deferring to Jarvis Hayes who’s shooting no better at around 3-14.

-Shaq short hook on Haywood. This is getting quite redundant.

-Haywood gets trounced by Shaq and dropped. This is like Haywood’s worst nightmare come true. Shaq scored on him about five times in a row and then clocked him several times on the defensive end. I bet Etan is on the bench smiling.

-Eddie Jones hits another three to pretty much ice it.

-Wizards are only down 6 with 50 seconds left and they immediately foul. Even they know they can’t stop anybody.

I catch Rileys conference before hitting the locker rooms. No word on Wade or his decision. Riley is lobbed questions about Shaq playing 37 minutes tonight and facing mostly one on ones. Riles says Shaq knows he has to step up and is ready to play the minutes. He got the day off yesterday just to rest up for the extra PT. He also said Shaq is basically playing point center right now as the offense goes through him like it did in L.A. As far as the one on ones he says, “They don’t think he can do it anymore so we’re seeing that more often but they are making a big mistake. The more he faces that the better his timing will be and he is getting better everyday.”

In the locker room Haslem comments on a few things including the fact that some people feel they can’t make the playoffs without Wade. He says, “That’s ridiculous. There are a lot of guys on this team that get it done and it’s not just all Dwyane.” He also makes mention that he kept telling Shaq to go left after a few dribbles in the paint. “I was telling him that all game and then he finally did it with 1 minute left in the 4th quarter and it was probably his easiest basket all game.”

After a few more minutes with Haslem the big Aristotle comes out and answers anything you would like. He’s as engaging as you’d expect. He’s also enjoying the extra touches with Wade out and says if he gets 45-50 touches a game good things will happen. Asked about the 37 minutes he says it’s nothing followed by “If you feed the big dog he guards the yard. Otherwise he’s just walking around. When I’m in the offense it’s nothing but when you are just running up and down the court and you don’t touch the ball you get tired and it’s boring. But if they keep feeding me I’m going to go to work.” As far as Wade he says he hasn’t given him any advice with regards to surgery because it’s an injury he’s never had and that Wade will have to make that decision himself. When asked about whether he actually paid Gilbert the money for his trampoline stunt he says, “I’m not a gambling man but I told him I’d give money to his charity. I sent the money directly to his house and Fed Ex lost the package. It’s out of my hands now!”

I told him I saw he battled Lebron and Howard in Vegas and asked who he had next on the list. He said, “That’s right I took a few cats out. Hmm, let me think, let me think…Steve Nash is next.” You heard it here first.