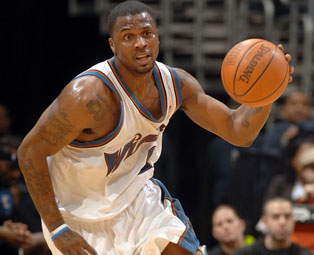 Tonight, with the all-star break behind them and first place in the conference feasible, the Wizards begin their march towards 50 wins. A feat not too far-fetched, especially if they keep playing teams like the Minnesota Timberwolves. Regardless if they broke the Suns streak or not the Wolves have to have the worst starting lineup in the NBA. Their team is basically KG, Ricky Davis, Randy Foye and the Washington Generals. Anytime Mark Blount is your starting center, you have some problems with depth. This is about the only time you’ll see me say I honestly feel sorry for a guy who makes over $100 million dollars. But I digress.

I’m in a pretty good section tonight right behind the basket getting a lot of the on court chatter.

Deshawn Stevenson starts the game off hitting a jumper.

Blatche is getting the start tonight and he’s guarding KG. We’ll see how that works out but I’m predicting KG has a 30-20 game and they still lose.

KG misses an easy one over Blatche.

Eddie Jordan is screaming about KG holding Blatche as he tries to get position under the basket.

KG is not even guarding Blatche. He’s treating him like the new dude in a pick-up game who gets no respect or hand in his face till he proves he can hit something.

Arenas splits 2 double teams on his way to a beautiful lay-up.

Stevenson hits another J and its 8-4 Wizards.

Randy Foye is out there doing a whole lot of nothing.

Blatche shoots a 3 trying to show off while KG is paying him no mind.

KG gets a couple easy buckets followed by a Ricky Davis 3.

Arenas hits Stevenson with a behind the back on the break but he blew the lay-up.

Blatche misses an open jumper at the top of the key. You can tell they told him to be more aggressive tonight so KG can’t roam as much on D.

Davis is complaining to the ref about a foul but the ref couldn’t possibly care less. I’m pretty sure Ricky gets that daily.

Michael Ruffin makes his first appearance in months. Not that you should expect much. Maybe a couple boards a night.

Its 27-17 Wizards as Jarvis Hayes hits a pull-up jumper.

Mark Blount from the top of the key at the buzzer and let me tell you that’s not the shot you want. Blount just ricocheted it to the left side of the backboard. That was awful as is this Dunkin Donuts cartoon race they have on the jumbotron.

2nd Quarter starts with some sad lineups on both sides. Etan Thomas, Daniels and Mike James are by far the best guys on the floor.

Some dude just rolled in with a huge fake 80s dookie rope chain and an Adidas track suit followed by a beautiful woman who I later find out is Letoya Luckett. Someone asked me to take a pic of them with her and at the time I’m thinking did this guy just stop and go your girl is so bad I need to have a picture of us together? That would actually be pretty funny.

Mike James just crossed up Hayes for a J.

I can’t believe they are actually doubling Darius Songalia. I think I just entered bizarro world. Either that or they really have no faith in Mark Madsen…oh actually you know what that makes sense now.

I know this is shocking but Michael Ruffin is awful.

Timeout as its 37-24 Wizards. Now they are giving out autographed Hibachi grills…wow.

Gilbert shoots an easy J over Jaric. It’s like the Wolves have an endless supply of bums on their bench.

Jaric just missed a breakaway lay-up. Nothing good can come out of Minnesota getting the 8th seed. I say tank now!

Wolves cut into the lead but Arenas just got another crazy lay-up + 1.

KG swats Butler and looks like he is finally making his presence felt in the game.

Arenas with another sick move. He is just padding his highlight film tonight.

Blatche is running the point and just falls down on his back. Haha

Haywood gets a dunk to end the half 57-44 Wizards.

KG gets a three point play and Davis hits a jumper to cut it to ten.

Foye is finally coming to life hitting a couple wide open jumpers from the corner to cut it to six.

Arenas has 27 already as his two free throws push the lead back to 8.

KG is blocked from behind by Stevenson but KG plays the pass of the loose ball and steals it back. That was a basketball play right there.

Davis hits a 3 but Stevenson runs the floor for a lay-up.

Some Mark Blount garbage +1 brings the Wolves within 4. That’s the closest they’ve been since tip-off.

The teams exchange buckets as Songalia hits his only basket at the buzzer to end the 3rd 83-74 Wizards.

Into the 4th the Wizards continue to hold off the Wolves charge. Arenas comes out and hits a 3 to bring it back to a 12 point lead. He follows that with another turnaround J.

Davis hits a jumper then turns it over on the next play. Tech on Davis after getting called for his fifth.

Jaric tip closes the gap to 98-92 but Stevenson, having his best game of the season, hits a lay-up and a jumper to push it out of reach. Free throws down the stretch end this one 112-100 Wizards.

We hit up the Wolves locker room first and needless to say they aren’t too happy. Ricky Davis answered a couple questions but he wasn’t really saying anything important. There seemed to be a bit of trash talking on the court but he didn’t go into to it and after 3 minutes just got up and left. The Big Ticket came out and basically did the same thing. You could tell he wasn’t happy with his team’s performance. He blamed some of it on the all-star layoff rust but most of it on the fact that his team is a bunch of NBDL players. Ok, I made that last part up but he was probably thinking that. He did say that enough pressure has been put on management to make a deal before the trade deadline and there was nothing more he could do. When asked how he would describe Andray Blatche as a player he quickly responded ‘Next Question.’

In the Wizards locker room Deshawn Stevenson was holding court talking about how no one on the team can talk to him unless they are shooting 50 % from the field. When asked how they can get in touch with him he says ‘E-mails, or they can send a message through the coach and he can come tell me.’ He then went into swagfest, a bragging competition between himself, Buter, Arenas and Roger Mason Jr. He says Butler’s constantly bringing up his appearance on Oprah while Gil talks about his million dollar party but Stevenson says “I’m Mr. 50 and I have a black card.”