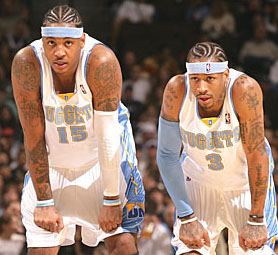 The battle for NYC-area basketball supremacy continued last night. On the one side of the river, you had the Knicks facing Dirk Nowitzki’s Mavericks, the best team in the Association. And on the other side, the Nets were hosting Allen Iverson (in his first East Coast appearance since the trade) and the Denver Nuggets. Which to choose?

For me, it was pretty easy. Having not seen Iverson play this year, I was headed to Jersey (along with Ben—who drove—and Lang). TNT picked Jersey as well, sending Sages and Scooter and Marv and them. There were other national guys there as well—Sam Smith, Michael Lee, Liz Robbins. Isiah may have goten his extension, but he still has a lot of work to do if the Knicks are to be the area’s main NBA attraction.

• George Karl, who’s gregarious to begin with, holds an incredibly long pre-game media session. Much of it focuses on his 23-year-old son, Coby, who’s undergoing cancer treatments. But it eventually shifts to Iverson, who Karl continues to praise at every opportunity. While Karl is talking, Nets center Jason Collins strolls nonchalantly by, a late arrival.

• Like most other teams in the League, the Nuggets place little laminated cards at the locker of each player on the road. They’re printed with the player’s number and, in this case, nickname. Carmelo Anthony is “Melo,” Allen Iverson is “AI,” Reggie Evans is “The Joker,” Kenyon Martin is “730” (think Big L: “If you 730, that mean you crazy”) and Steve Blake is, well, “Blake.” According to the equipment manager, he doesn’t have a nickname. So we’d like to suggest one: Gummo. Sorry Steve, but you DO kind of look like dude.

• Rick Brunson is with the Nuggets. Maybe as a volunteer coach? I never do get to ask.

• The Nuggets strength coach, who looks like a squished-down version of Supafly Snuka (or maybe the Ultimate Warrior, one of those old wrestlers) refers to AI as “Franchise.”

• DerMarr Johnson has two Sidekicks and two phones. Maybe three. Something like that.

• Carmelo Anthony has an iPod bumping (through headphones that may as well be speakers) “new Jeezy” and one of those LRG SK IIIs. Kinda wish he had a D-Wade one.

• FOOD REPORT. Classics: turkey, mashed potatoes and glazed carrots. Plus the unfadeable hot dogs. Nothing original, but why mess with success? B+

• AI dunks in the layup line, comes back down the line past his teammates with a huge grin on his face. It’s amazing how damn happy he seems. He also gets the biggest cheers I’ve heard an opposing player get since MJ retired.

• Camby wins the tip, to AI in the backcourt.

• Melo scores first, then gets tagged for an offensive foul. There will be many more whistles. He’s wearing calf sleeves on both legs, so it looks like he’s wearing knee-high black socks.

• Melo scores again, and RJ gets a dunk on a pass from VC. Next time down, Carter takes it himself, and gets swatted EMPHATICALLY by Camby. Foul. It almost looks personal.

• AI—in the spirit of being a rookie again—is in some ILL black Questions with baby blue tips. Holla at me, Reebok.

• Iverson gets a steal, leaves it for Melo, who gets fouled. Next time down it’s Iverson again, leaving defenders in his wake before flipping up a right-handed shot over Mikki Moore while driving left. Good stuff.

• Moore, meanwhile, hits two straight unguarded jumpers from inside the circle. He’s really been terrific for Jersey since Nenad went down.

• Iverson finds Nene underneath for an easy dunk.

• Camby hits Melo with an alley-oop from just inside the three-point line. Then he swats a VC attempt right into the media section behind the Nets basket. Nasty. The Nets inbound, Carter tries a jumper while yelling to try and get the foul call. It doesn’t work, and Vince sulks as the Nuggets push it the other way and get an easy dunk (Nene).

• Kidd is actually posting Iverson—playing a two-man game, dribbling in and resetting—which just isn’t the way the Nets should be playing. It doesn’t work very well.

• Marcus Williams checks in for the Nets. It’s so weird—he wears a headband, but only while he’s sitting on the bench. As he checks in, he tosses it to a couple kids in the stands who are obviously waiting for him to do just that. Does he only sweat when he’s NOT playing?

• A Boki Nachbar dunk here, a VC 3 there, and the Nets are up 29-23. Vince is wearing those weird Nikes with the Shox that are inside an Air bag. They look sort of like Air Force 25s, only they’re not.

• Meanwhile AI’s heating up. And so are the refs. Melo gets called for his third—offensive, again—with 7:46 to go. That’s OK, though, it’s not like anyone’s here to see him play or anything. Lame call.

• Dave Winfield also picked the Nets over the Knicks tonight.

• Jason Kidd throws a LEGIT no-look pass to Richard Jefferson underneath for an easy two.

• Iverson hits a layup, and the Nuggets get slapped with a delay of game, their second, apparently. Then Nene picks up his third foul and goes out for Najera again. Lots of whistles.

• AI crosses up Kidd, drives past Moore, and hits the reverse layup using the rim to protect the shot. Textbook.

• Kleiza gets blocked from behind by Mikki Moore, and reacts emphatically because he thinks he deserves a call. He gets one—a T.

• Camby picks up another foul before the end of the half, and the Nuggets go into the break down 7, 49-42. Melo played less than 10 minutes of the first half.

• The Snackbar catches a dunk on the break, and Gary Sussman comes with the “B-B-B-B-B-oki!” call. Good stuff.

• We can’t quite figure out why, but there always seem to be a lot of fat people at Net games. And not just “out of shape” fat. Like, “at risk of a heart attack in the next 15 minutes” fat. It’s scary, to be quite honest.

• Kidd misses a three, the rebound’s tipped to AI, who finds Nene with an oop.

• Camby gets fouled, goes to the line, gets yelled at by some American Chopper looking dude sitting about 20 rows up (bootleg USA football jersey, bandana, sunglasses, mustache). The kid sitting with him (in a Nuggets jersey, no less) looks mortified.

• Melo takes VC off the dribble, gets him tagged with his fourth foul. Melo goes to the line, Vince goes to the bench. Melo’s too big, too quick, too strong. He still misses 1 of 2, though.

• Camby swats Mikki Moore so hard that he falls down. The official scorers are wrong, because Camby has roughly 27 blocks.

• Despite more whistles against Denver (Camby picks up his fourth, Iverson commits one on the offensive end), they continue to build the lead. 73-60 with a little over a minute left in the third.

• T-shirt toss. And, right behind us, a grown man happily (and proudly) snatches a free t-shirt out of the hands of some scrambling kids. That’s the spirit, sir.

• AI gets Eddie House into the air, jumps into him, draws the foul. House is irate—and rightly so—but you know what? He’s Allen Iverson, and you’re not. Enjoy the foul.

• Eddie House scores on a runout, and somehow it’s 76-73. I should really be paying closer attention.

• Nene picks up his fifth foul.

• Either Lang or Ben points out that the Nuggets give each other high fives with the backs of their hands. Not sure who came up with that idea, but my money’s on AI.

• Gummo drives baseline, stops on a dime, losing Jefferson, and proceeds to miss the open two-footer. Damn you, rabbit! You smell like f**kin’ piss!

• Camby draws a charge on Jefferson (risky that, what with five fouls and all) and Melo buries a corner trey. That’s 27.

• The Nets get a Moore dunk (from Jefferson) and an RJ layup off a Camby turnover. The Nuggets turn it over again, but House misfires on a three. Nene checks back in.

• Melo picks up his fifth, and Nene fouls out trying to draw a charge on RJ. VC—who also has five—is being swapped out offense-defense, but he fouls out anyway with 6.7 seconds left after another travel and a missed three. He finishes with 29.

• For some reason we’re kept outside of the tunnel for an extremely long time. Pretty much everyone’s confused. Kenyon Martin (who admittedly didn’t play) comes out before we’re let in. By the time we ARE let in, George Karl’s already out in the hallway. Or maybe he’s still talking from pregame. One or the other.

• Marcus Camby is wering beige. A lot of it. And some cool “MC” diamond cufflinks.

• “I think we can score enough points to beat anybody in the League, it’s about defending the paint,” says one of the best paint defenders in the League.

• “We’re in a good place right now. Everybody thought with the trade for AI it would be instant success.” “There’s no egos out there—the ball is being shared.” “It feels good to get a win. Hopefully we can snowball some more wins on this trip.” More from Mr. Camby.

• We exchange pleasantries, mostly about the wack-ass East Coast weather. “It was 70 in Denver when we left.” Terrific. Meanwhile, it’s 33 in Jersey.

• Melo comes out of the shower room with a clear plastic shower cap on. Stylish.

• Allen Iverson has a huge crowd around him, and it seems like he’s more than content to answer every question. It would probably be possible to write a full magazine feature about AI every game. Once again, he seems extremely happy. Some highlights follow.

• “Obviously I’m not satisfied, because I think we can be better than we are right now.”

• “I thought life would come to an end if I ever left Philadelphia. I feel like a newborn.”

• “Without Philadelphia you wouldn’t have AI all over the world—they gave me a great opportunity.”

• As we leave, the media group around AI has barely diminished, and he’s still talking. No Denver media relations people seem inclined to pull him away.