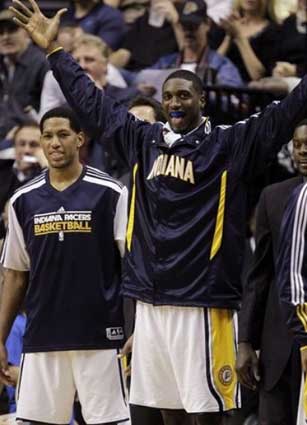 The Nuggets came out of the gate looking sluggish, just as most teams do on the second end of a back-to-back. But from the opening tip, the Pacers seemed to get whatever shot they wanted at the basket.

Indiana missed some of these attempts early, but still rode their excellent ball movement. The Nuggets’ lack of enthusiasm on the defensive end led to a 59-49 lead at the half. The Pacers were just getting started, though.

The third quarter of this game was one of the most entertaining quarters of basketball that we have ever seen. They shot 20-21 (yes, 95 percent) from the floor. When you compare their three-point shooting (8-9, 89 percent) and their free-throw shooting (6-9, 67 percent) you can see just how rare of a feat they produced.

In one of the most entertaining blowouts we’ve ever seen, Indiana put up 144 points and the game was a technical knockout midway through the third quarter.

– We get off to a weird start at the stadium — the sound for the Pacers’ intro takes a minute to start working, the internet wouldn’t connect, twitter isn’t tweeting, and we have a mini TV as our commentator. What’s going on?

– And Roy Hibbert is down in the corner. He went down to the floor after he fouled a Nugget and was grabbing his face but got right back up.

– Danny Granger and Darren Collison are hot early. The small forward has 8 points and the point guard has 6, which account for all of the Pacers points halfway through the first quarter as they lead 14-13.

– Roy Hibbert having tons of trouble early between a travel after trailing the break, going down, and another travel in the post.

– Josh McRoberts is shoots a three without hesitation (Note: Not for the last time tonight).

– Al Harrington “We don’t miss you” chant. Makes you reminisce to Regg

– Britney Spears “Hit me Baby One More Time” during a timeout, enough said.

– 20-19 Pacers with the Nuggets still pretty much going through the motions.

– Good ball-movement by Nuggets leads to a Gary Forbes three in the corner. Speaking of Forbes, he’s one of the feel good stories of the League after playing in Europe for a few years after college.

– Everything Darren Collison does is working for Indy. Just knocked down a corner trey and finishes as the leading scorer with 13 points through one, propelling the Pacers to a 27-25 first quarter.

– McRoberts just banged one inside like he was still playing for Duke to start the second.

– Brandon Rush with a leaning jumper toward the rim. He followed the friendly carom and slammed it home.

– Rush with a 17-foot jumper from the left side and another jumper at the top of the key after pulling up on JR Smith. TJ Ford off to the races and Indiana has their biggest lead at 9 points, 39-30.

– Almost no defense by the Nuggets thus far on their second game of a back-to-back. Rotations are slow, especially collapsing when the ball gets into the paint leading to open threes and uncontested layups.

– Dunleavy 0-4 on threes, another short shot.

– I wish every young basketball fan could have seen what Tyler Hansbrough just did on that possession. He was being boxed out by Nene and Al Harrington and willed his way to the ball and got two-straight offensive rebounds. He had to rip one from Nene’s hands, and he fell out of bounds saving the other one. After the possession was over, he got a standing ovation for his hustle. That, ladies and gentlemen, is exactly how basketball should be played.

– Melo shows why he’s so special on the offensive end, knocking down a tough fade-away jumper for the Nuggets from 20.

– Pacers open up biggest lead of the night on a Darren Collison lay-up. No contention at all from the Nuggets front court. 57-44 with 2:40 left.

– Melo with a mail-it-in jumper from short corner with a hand in his face.

– Halftime the Nuggets found themselves down 59-49, still with a chance to climb back into this game despite getting killed on the boards (28-17).

– Pacers continue to do what as they please on offensive end to start the quarter, to say the least…

– This third quarter turned out to be the highest scoring quarter in franchise history for the Pacers. They literally didn’t miss until the final buzzer, pouring in 54 points on 20-21 shots (the only other misses were the the potential 36-38th points of this streak at the free-throw line) in the whole third quarter. This is the most accurate display of shooting you could ever imagine. Nobody in the stadium can believe their eyes. The Nuggets obviously cannot keep up with this scoring barrage and it would actually be impossible for the Pacers to be playing less defense than the Nuggets. 113-76 after this weird display of accuracy. WTF just happened. Did the Mayans screw the calendar up? Is the world ending tonight?

– MIKE DUNLEAVY could not feel his face right during this quarter. AT ALL. HE WAS UNCONSCIOUS.

– The “He’s on fire” chant from the Pacers fans is the biggest understatement possible. He’s hotter than the Earth’s core. 7-7 from the floor, 5-5 from three for 24 points in the quarter. Whatever we said earlier about his missing open shots must have circulated around the stadium and gotten back to him because he just defied every force in this world this quarter.

– After our pre-game debacle and what has been going on this quarter, we stand by our first statement. Is this the twilight zone?

– We are informed that the Indiana Pacers just scored the fourth-most points ever in a quarter. The record is 58 points.

– I think I just saw Carmelo walk off the bench to the locker room. No but seriously, let’s just say that Melo probably wants to get out of Denver slightly more after tonight.

– Did you know that there is a Hibby shake? “Do the Hibby-Hibby shake” has an unprecedented two-minute music video (See below–Ed.). We have seen it all tonight.

In case you were wondering, here is the list of shots the Pacers made, in order, during their record breaking streak: