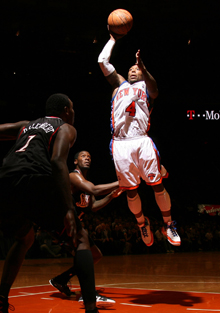 Sam Rubenstein’s Odyssey-inspired article got me fondly thinking back to my school days. The following is an ode to my science teachers/professors of the past. You said knowing the Scientific Method would be important one day—you were right.

Tonight, when I saw the Knicks at the Garden, I mentally removed myself from my seat and watched the game as a spectator—the court, the crowd, the buzz, the stadium—like a researcher observing his subjects. I wanted to test a theory. A theory that says selling tickets and entertaining fans is the ultimate goal. I had to ask myself…

Question
Is being entertaining enough?

Observations
The New York Knicks are a forgettable team. Larry Hughes. Chris Wilcox. Quentin Richardson. Chris Duhon. Wilson Chandler. Um, need I continue? The biggest name comes off the bench. Nate Robinson. Sometimes known as Krypto-Nate. Other times known as Nate the Great. Most other times known as That Short Guy Who Can Dunk.

Robinson’s energy, springs and, er… shortness, make him a novelty: a treat. Novelty items are meant to be enjoyed for a moment and forgotten. There’s no special value in them. As the heart and soul of the Knicks, Nate makes watching the entire product seem like a novelty event. There’s a point at which Knicks games stop being exciting and become a drudge. That tipping point is three games.

The Knicks are in a strange situation. Fans understand the hollowness—wins are exciting, being exciting while still losing is hollow—but they still stand and support the team. Why do they root on a sub-par talent? Why root for a team that plays no defense and loses the majority of the time? Why root for the show and not the game?

Hypothesis
My guess is things look to be turning around, and the New York basketball fan has tasted success, whetting his interest for the future. It also helps that the Knicks on the active roster are good people with clean records.

That’s the hypothesis, now onto the experiment…

Data
Early on, the Knicks are sloppy as the week-old salmon I happily ate for dinner (don’t ask). The first half for the Knicks is as ugly a half as I’ve ever seen played. It takes the Knicks three minutes to score, and about nine more for them to break into double-digits. Chris Duhon shows why he’s merely a backup-caliber point guard benefiting from a system. He forfeits a wide-open layup to dish it to a well-covered Quentin Richardson on the elbow—a decision so disgusting, I nearly spat up the fish. On the next possession, Andre Miller steals Duhon’s pass, and two possessions later, he gets a deuce popped in his grill. It continues throughout the night. Sam Dalembert starts the game having a field day on the defensive end. Even ‘Dre Dala works his way through an extra sloppy dribbling exhibition into nailing back-to-back jumpers and connecting on countless easy forays to the hoop.

Early on, it looks like anyone who was looking for a good game came to the wrong arena. Nate Robinson, who recently exploded for 41- and 32-point clinics, is playing like another rusty part of the Knicks’ broken down engine. The crowd grits its teeth in unison every time Al Harrington whacks a wide-open 16-footer. Chris Wilcox is falling on the floor on the defensive end and falling on the floor on the offensive end—being blocked by nothing and the rim, respectively. The only reprieve is an offensive 3-second violation called on Sixers. Philadelphia draws fouls and the Knicks draw more blanks.

Nate Robinson side notes:
Nate is a nice player, but he’s not a guy any team should rely heavily on. Most are aware of the issues: his size makes for non-favorable matchups on defense. His offense will be far from consistent. Some nights, he can slide around the defense and take advantage of the frantic pace and abundant shots. He’s not much of a playmaker, so his services are quite limited. He’s in a good situation, however, because the Knicks need someone who can resuscitate its comatose fans. It could be worse, but the Knicks’ choice to protect Nate means that they’ll likely hand him a contract with some years on it in the offseason.

What has Nate accomplished? He’s a Dunk Champ. His jersey was retired in summer league. For an hour. He’s blocked Yao Ming. Once. Which is four times less than every other player in the L. Oh, and he’s the emotional leader on a team that hasn’t had a winning record. Although these things seem to overvalue his skills on the court, there’s one thing about Nate that can’t be disputed:

Nate brings people to the Garden to watch games. He sells hot dogs and French fries and jerseys and he’ll occasionally get the team on Sports Center. Sure, the Knicks could have had some good cap room in exchange for his services, but it doesn’t quite seem worth it when you realize how few interesting players are on New York’s roster. Even Stephon Marbury—quite possibly the Knicks’ most compelling personality—is now balling for a division rival. People can’t even rag on Jerome James anymore. Nate is all the Knicks have at this point.

Krypto-Nate has a kryptonite: declining athleticism. In other words, age. When he’s unable to jump higher than a freezed-out Dwight Howard or explosive past his defender to create room for a jumper, he’ll look a lot like a mere mortal. When Nate is resigned long-term in New York, will people appreciate the fact that Nate is their size? If he’s not making highlights, I wouldn’t bet $1 on it.

When you’re playing in an offense like the Knicks, there will always be runs (and opportunities for the crowd to get hype). The Knicks show some offensive competency in the first six minutes after the break. Although they’re scoring and creating better shots with crisper ball movement, they break the 50-point mark midway through the third quarter.

It’s the classic example of digging a hole too deep and being unable to get out. New York is alive on the offensive end due to Larry Hughes (another player like Robinson—who is capable of offensive greatness). This time, Hughes is cheered when he leaves the game. It must feel like he’s gotten a 900-pound gorilla off his back.

Thaddeus Young side notes:
After an amazing start to the season—one which I wasn’t surprised about, considering he was just behind Kevin Durant and Al Horford—he has since slowed down. Not coincidentally, though, Andre Iguodala is playing more like his $80+ million self. Somehow, the switch happened somewhere between Mo Cheeks’ firing and Elton Brand’s season-ending surgery.

So what’s the reason for Young’s recent slow-down? Well, Young Thad is well outside the focal point of the Sixers’ attack—not a single play is called for him all season. This strange offensive philosophy is a direct result of the team’s personnel.

You may know where I’m going here—Andre Iguodala.

While the team would like to find a way to build around both hyper athletic forwards, it may eventually have to choose between the two. Right now, it’s a test—management is watching to see if the two can co-exist. Both have played up to their potential when on the court at the same time. When Elton Brand returns next season, this fact may be amplified. While they’re both excellent pieces, the front office is probably already considering their options for when Young comes up for an extension. Whether they bring back Young will largely depend on how well they’re playing with Elton Brand next season and how long Philly fans can cope with a decent team (a .500ish team), but a clear non-contender.

Results
Philly can’t stop the New York scoring spree, but they do enough on their offensive end to keep themselves ahead. The Sixers are over the foul limit late in the game, and they’re not connecting on their own free throws. It’s a shame that Andre Miller is playing so well on the offensive end, but making Larry Hughes look like a God on the other end. Miller jumps like a ballerina when Hughes nods his head just two degrees toward the sky and steps back off his pivot foot. Still, as well as the Knicks are playing in the second half, they’re unable to overcome the absolutely dreadful first half play. As they’ve proven all season, playing hollow basketball still can’t win games.

Conclusion
As much as the Sixers wanted to prove my hypothesis wrong at the end, their offense (what else?) gave them the grueling win. They may need to consider that thing called defense thing sometime in the future as well. And, no, defense does not include hoping the opponent will be as incompetent as the Knicks were tonight.

The Knicks will ultimately need to focus on what wins games, and not just what excites fans. Donnie Walsh must continue to search for players with a winning instinct because fans are seeing through this incomplete product.