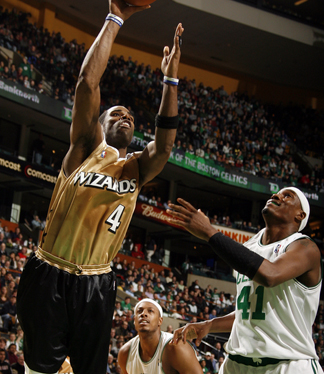 by Ben Collins and Jonathan Evans

– Big Baby reveals that he was a runningback in high school and that he rushed for “like 1,400, 1,500 yards” and led his team to the State Championship in his junior year before he quit the team to focus on basketball. I’m sure his coach was just pumped. He said Nick Saban called him to try to talk him out of it. Seriously.

– Brian Scalabrine is talking about what it would be like to be Kenny George, the UNC-Asheville monster du jour. “It’s okay if you’re driving, like, a Benz because those seats go way back. But you’re not getting into a Carolla if you’re that big.”

– Ray Allen: probably the only guy in the room, including most of these writers, who uses the word “nuance” correctly.

– The strategy on the whiteboard says: “Drive: NO Dancing.” I had no idea Antoine Walker was still on the Celtics.

– Oleksiy Pecherov looks exactly like this guy who used to have a show on E! and I can’t remember, for the life of me, what his name is. There. That’s a game note.

– DeShawn Stevenson has either a lollipop, one of those floss devices or a straw in his mouth during shootaround. Watch out for that DeShawn Stevenson, he’s dannnngerous. (Jon confirms that it is, in fact, a straw.)

– I learn that Tracy Morgan is writing his autobiography (for the second time to me, being a 30 Rock disciple) when the lights went out for the introductions. This must be what it looks like in Tracy Morgan’s brain all the time.

– The lead singer of the Plain White Tees trudges his way through the National Anthem. Yikes. Hey there Delilah, what’s it like looking just like Paul Reubens?

– Yay, we don’t have to deal with Tony Allen’s point guard impersonation that much tonight. Rondo is dressed and in the starting lineup.

– KG looks minorly pissed off as we start the game and that’s probably a bad thing for the Wizards.

– Pierce opening three sets off a relatively loud crowd.
– One of those not-in-the-box-score things: KG is the league’s best big defender because he knows his exact limits with every player in terms of how to shade off his defender
– Caron Butler pull up jumper from 15 feet, 3-2.
– Butler sets up one-on-one against Pierce. He settles for a tough fadeaway jumper and missses. This could be an interesting matchup of guys possibly playing for the same All Star spot.
– Stevenson drains a three from nowhere to tie it at seven and this guy STILL HAS THE STRAW IN HIS MOUTH. He must’ve been weaned off of pacifiers very late.
– It’s worth noting that Eddie Jordan is also representing in the alternate uniform look. Thankfully his gold blazer and black slack combination doesn’t have that unfortunate shine that the jerseys do.
– KG hits a turnaround fadeaway over Jamison. There’s no defense for that, 9-9.
– Butler, taking over where Agent Zero left off, forces the one-on-one game, this time missing a three from the top of the key.
– Butler’s forearm clearout sends Pierce to the deck. Perkins has his back and engulfs the Butler jumper. This leads to a Ray Allen lay-in and a D.C. timeout. 5:46, Celtics +4
– Antawn Jamison will not miss from within 10 feet regardless of circumstances. 13-11, Celtics
– KG doesn’t believe he dipped his shoulder on that play and pointed to his shoulder. “Look, ref, I don’t even have shoulders,” he said.
– Okay, I made that last part up.
– Butler set up on Pierce. One dribble. Rise. Wet. 16-13 C’s.
– Kendrick “Pistol Pete” Perkins just shook up Brendan Haywood, going behind the back to Rondo, who swung it to Ray Allen for corner three. Somebody get this guy in the Skills contest.
– Stevenson 3 silences the crowd. 18-16. I must say, from this vantage point, it definitely looks like he’s winning his beard battle with Drew Gooden. Regardless he gets points for looking like Freeway.
– Big Baby comes in early (there must be turkey on the court somewhere) and it’s Jon Evans’ field day because Roger Mason Jr. is in.
– Briefly.

– Andray Blatche is so big and long. If he bulks up, he could be the best… uh, wait, no… at best he could be the fourth best player on this team. That whole situation is like being the second best priest when they’re deciding the papacy.
– Glen “Big Adolescent” Davis swats away the Blatche up and under attempt.
– Pierce sets up on Butler on the right wing, rises and hits for two, 22-18 Celtics.
– Jon Evans gives the world’s quietest fist pump after a Roger Mason three. Extended minutes for the UVA grad!
– Nick Young drops a long two and the Wizards are all of a sudden in the lead, 23-22.
– How do the Celtics counter? By running out a lineup of Ray Allen and four reserves. This should probably cease that Doc-as-Coach-of-the-Year argument.
– The Big Adolecent picks up a dubious charge as Blatche pulls up for a floater in the lane.
– Ray Allen blows by Blatche. But Blatche recovers and blocks Ray from behind. Sure must be nice to be nice to be 6’11”.
– House finds a streaking KG for a layup. 27-25 C’s
– In-arena interview with Pee Wee Herman. Where’s Miss Yvonne? Wait, nope, just Plain White Tees guy again. Side note: Does anyone else say “Mr. Herrmann, paging Mr. Herrmann,” every time Walter Herrmann enters? Because you should.
– The Wizards have neither Butler nor Jamison in the game and it’s not pretty: Mason Jr., Young, Sogaila, Blatche, and Sexy Oleksiy Pecherov.
– Oleksiy looks like he’s still on Serbian time, or wherever the hell he’s from, as he clangs a pull-up three.
– Rick Majerus must be in the building because it’s 25-25 halfway through the second quarter.
– Best Heroes Among Us EVER: Some woman and her 127 highly-trained monkeys. This isn’t even a Brian Scalabrine joke. I want one. So bad.
– As badly as the offenses have been today, the passing has been tight for both teams at times. Oh gee look, we have an example right here: KG to Perk (again) for a Shaq-esque, rim lowering dunk.
– Something about this Inside the Celtics Dancers Locker Room jumbotron footage is just gripping. Can’t put my, uh, finger on it.
– There’s a Vote for Brian Scalabrine Over Paul Pierce clip too. I’d still rather see ‘Toine.
– Butler airball on one end leads to a Perkins slam on the other. 4:31 left, Celtics extend to a 6 point lead.
– Jamison strips / blocks Perkins dunk. Followed by Perkins swatting a Haywood layup out of bounds. Eh. Jamsions block was better.
– Brendan Haywood is jawing with Kendrick Perkins, but amicably, telling him what life is going to be like, exactly, in five years.
– Ray Allen just, well, I’m not sure what he did and this resulted in an offensive foul and, subsequently, a Doc Rivers stroke.
– Since the Wizards offense is offensive, Andray Blatche decided to skip an offensive set and dunk the ball. Sixty-percent of the time, that works every time.
– Stevenson for three ties it up and we have a ballgame, kids.
– Another wizards possession, another missed shot. This time, Jamsion misses a three from the left wing. The Wizards are currently shooting 31% from the field. …and just as I’m typing that, Daniels finds Haywood for a slam, 34-32 Celtics with 40 ticks left in the half.
– Beautiful Ray Allen set play – a fadeaway on the right baseline — gives the C’s a halftime lead, 37-35.

There isn’t really much of note so far. You can credit the ballyhooed Celtics defense for holding the Wiz to 35 points. But how do you explain the Celtics 37 points? To put that total in perspective, in their opening night matchup against these same Wizards, in the 2nd quarter alone, the C’s put up 37.

On a lighter note, I introduce Collins to facebook scrabulous. He is grateful.

Third Quarter:
– Perkins on left block, spins free, reverse layup, 39-35 Celtics.
– Jamison cleans up the Butler miss, 40-39 Celtics.
– Top of the key three from Allen pulls the lead out to four.
– KG gets Haywood to bite hard on a dribble fake. Rises up and hits open jumper. 45-43 Celtics.
– KG throws a lazy pass on a C’s fastbteak which leads to a dunk by Haywood on the other end. Funny, I didn’t think it was possible to use KG and lazy in the same sentence. 7:19 left, knotted at 45.
– Caron Butler just did this Statue of Liberty dunk in traffic. There is no way he did that when he was in LA or Miami because he never would have been traded.
– Clearly someone wants to go to New Orleans this February. 47 all.
– Antawn Jamison just tipped in a shot on his own basket and he looks like he just threw up a little.
– Did I mention that Andray Blatche is enormous all of a sudden? God. He looks like the Cloverfield monster.
– KG’s jumper from the right wing gives him a game high 19. C’s +6
– I’ve been paying attention, but I have no idea how the Celtics have amassed a 56-49 lead, KG has put up 17, five and four and how the Celtics are all of a sudden shooting 46%.
– This game is irreparably boring for a six-point game, so I’m checking the Nuggets-Bobcats box score and Marcus Camby’s line right now: 20 points, 22 rebounds, six assists and six blocks. And that game isn’t even over.
– There is a dancing kid on the jumbotron which leads all in the audience wondering how to procure an adoption on said child/dance robot.
– Mr. Modesty himself, Curt Schilling enjoys a curtain call from the Boston crowd. He pretends not to like it but you can obviously see he’s feeling very proud of himself.
– James Posey gives the Celtics a seven point lead with that three, which I’m going to call their biggest lead of the game even though that’s probably not true.
– Jamison returns the favor, 63-59. End of three.

– I’ll let Jon elaborate further, but it can be summed up in one little talking point for me: The Arenas-less Washington Wizards are the Celtics lethargy-induced, fourth-quarter kryptonite this year.

The post game was a tale of two extremes. In one corner there’s the Celtics press conference where Pierce and KG try to make sense of losing three out of their last four, including their first back to back losses of the season.

“We definitely spoiled everyone early in the year,” Garnett said. “It’s not going to be easy. We’ll take our lumps now rather than later.”

In the other corner, winners of their last three, the Wizards locker room is the most confident its been all season.

“This win is definitely a confidence booster,” Tough Juice said. “Our confidence is at an all time high right now”

“Real recognizes real,” Butler said describing the Celtics. “We respect them and they respect us.”