Getting chippy, the only way to describe a physical playoff game 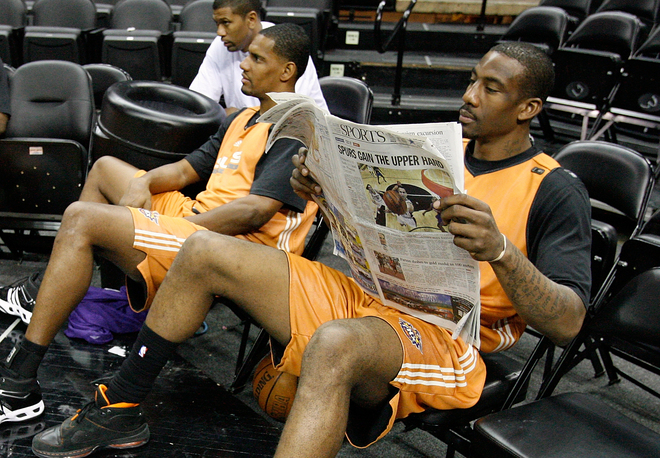 Hope all the Mothers out there had a happy day, and all you sons/daughters weren’t forgetful degenerates. I hung out with my parents and had a relaxing day of learning how to use a chainsaw and helping my mom destroy a tree. I’m being 100% serious.

Detroit and Utah are now in the proverbial driver’s seats, though the Pistons finally acted like this season’s Pistons and weren’t an indestructible basketball powerhouse, allowing the Bulls to win a game for their own mental health. Utah won in Oakland, as the Warriors died by the three this time. Golden State is much more fun in blowout wins than they are in tough playoff losses. That’s when the emotional and psychological breakdowns occur, just ask Okur. Jason Richardson with the frustration foul, Stephen Jackson laying on the floor in the middle of a play, Baron Davis giving Derek Fisher an extra elbow… the Warriors have been so dependent on emotion that it seemed to bubble over. The Baron dunk on Andrei was among the crowning achievements of the 21st century though. They’ll always have that. While one of the biggest stories of the playoffs has been the Oakland crowd, the Warriors finally lost in front of them. Meanwhile, Utah, Detroit, Cleveland, and Jersey are all undefeated at home so far.

The Nets will test that undefeated streak tonight against LeBron and the Cavs. Jake and I will be there, and I’m driving. That means I have to drive in to work today, and on a Monday morning that is a textbook recipe for urban road rage. Should be fun. Of course there is another slightly more important game tonight…

“This game is getting chippy.” Look, I know what that means, but what does that mean? I googled it and this is the first thing that came up. Yes, that is exactly the right way to describe a physical, intense NBA Playoff game with bad blood flowing. The Suns-Spurs game on Saturday was especially “chippy.” I was amazed at the self-control of Steve Nash and Amare. They each looked like they were ready to go Stephen Jackson game 2 vs. Dallas at any moment. They kept getting hit with bad calls, were about to lose it, and kept playing. Nash must have blown at least 5 point blank lay-ups and of course he took that friendly not at all dirty Bruce Bowen knee to the region of the body from which his twin daughters sprung forth. Lots of frustration. Steve started jacking in the fourth quarter in what looked like an effort just to prove that he isn’t scared by an 0 for 7 start or the roughhouse style of ball being played. Too bad for Phoenix the Spurs have Tim Duncan, and Manu Ginobili felt the need to get revenge for a black eye or whatever that thing on his face was. Also, the Suns really might want to stand near a guy on the other team taking a wide-open three. That’s one suggestion.

You know, at times the Suns take as many cheap shots as the Spurs. Raja Bell and Kurt Thomas will claw, hold, grab, tug, elbow, and anything else they have to do. For whatever reason, it’s just not as annoying when the Suns do it. Both teams were working the refs extremely hard, and that gets old fast. It was nice to see the refs let the players play even as the game got CHIPPY. Well, except for Amare. He’s not even allowed to look at Tim Duncan, which is ironic because Duncan is supposed to be the marked man after Crawford-gate. Maybe the refs all think they could get in trouble if they make calls against Timmy Eyeballs, so they give him what he wants so they can keep their jobs. Tonight the Suns have to try and figure out a way to win in San Antonio. It will not be easy.

Happy belated Mother’s Day to all.