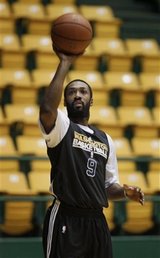 Prior to the start of the Washington Wizards’ season, people wondered if Gilbert Arenas would be able to suppress his ego, and allow John Wall to be the face of the franchise. Following last night’s preseason debut, there is no longer any doubt.

Arenas played the role of complementary star, and watched as Wall put up 21 points and dish out 9 assists in the Wizards’ victory over Dallas. Gilbert then told media about the new pecking order on the team, and clarified just how much his own worldview has changed.

“Right now I’m out there to hit open shots, teach John the ins and the outs of the game, and then eventually go on and move on. I’m on my way,” Arenas said, offering a subtle hint that he could be dealt before his $111-million contract expires in 2014. “This is the NBA. There’s few players that stay in the same city, so right now the city is John’s. I’m not here to fight anybody. I’m here to play alongside of him. He’s Batman, I’m Robin. When I came in, Larry [Hughes] moved aside for me to become a star and I’m moving aside for him to become a star.”

In the past week, Arenas has tried to contain his emotions. But he shared a few laughs with his teammates, as he scored 12 points, and grinned uncontrollably after Lester Hudson dropped the game-winning three-pointer with 2.5 seconds remaining. Afterward, the sentimentality was lost on Arenas. “I lost all feeling a long time ago. Basketball is basketball now, no matter what floor I’m on,” Arenas said with a shrug. “It’s just basketball. It’s not rocket scientist. You go out there and you just play.”

Depressing stuff, to be sure. The Gilbert Arenas of old is gone, and perhaps gone forever.

If this results in Arenas focusing solely on his play, and staying out of trouble, that might not be such a bad thing after all.