Gilbert Arenas: same as ever 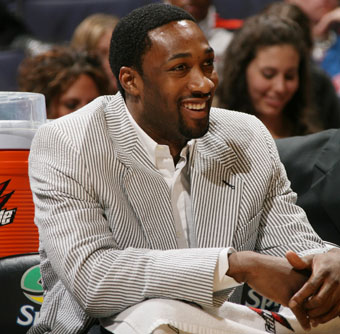 I hit the Sixers-Wizards game the other night (Philly won, 101-96, behind former SLAM diary keeper Thaddeus Young’s career-high 17 points) and got a chance to catch up with fan favorite Gilbert Arenas after the game. Gilbert has been out since November with a sore knee but seems just like the cat we all thought he was. Dude seems to have a locker room presence teammates enjoy—but more importantly—respect. Just ask Nick Young, who had to endure a love tap pop in the grill from the injured superstar and took it with a smile. This whole thing went so well, in fact, that I plan to do these type of q+a’s with NBA players the rest of the season. Enjoy Gilbert and stay tuned for more…

Michael Tillery: Being out Gilbert, what have you focused on mentally seeing the game from the outside looking in?

Gilbert Arenas: Watching the game like a coach. It’s easy to watch it as a player. You see things and you try to figure out what coach is talking about. As you sit there, you begin to think like a coach instead of a player.

MT: Athlete blogs. There is a disconnect between the players and fans because the media middle man also has a job to do. How can the relationship be made more personal with athletes using their own voice?

Gil: With a player blogging, there’s a different tone. He’s not aggressive and is in a chill state of mind. When it comes out (in a blog), it’s perceived as kind hearted fun and entertaining. When you are talking to the media, you might run into someone who is being an asshole at the time and wants to write some negative stuff. You might come across as aggressive because you just lost to so and so. When it reads in the paper, it comes across as a bad vibe for everybody.

MT: How do you view Black History Month? Who was that person who most gave you pride and inspiration?

Gil: This is our history. This is our month. We gotta cherish it and we gotta have fun. It’s the only time we get to have fun as Black people.

Of course I’m gonna say Martin Luther King. He made Blacks believe…he made all Americans believe. He was the first to believe in anything. He made America believe that every culture can co-exist on the same level.

MT: Who did you root for in the Super Bowl and where did you watch the game?

Gil: I was rooting for Junior Seau and Randy Moss while also rooting for Steve Smith. So it was a 2 against 1 thing. It really didn’t matter because I know Steve Smith, but I just like what Randy and Junior have done for the game.
I was everywhere. I was in the gym. I was at Cheesecake Factory watching the end picking up food.

MT: As the trade deadline approaches, what goes through the head of players and does player attitude change as the years go by?

Gil: When you become a veteran, you can’t believe expletive until expletive happens. Everybody’s name is thrown in trade rumors, so you can’t take it personal. Some players take it personal. They don’t want to play or they play too aggressive to prove they don’t need to be traded. At the end of the day it’s a business. If your name is in trade rumors, it really doesn’t matter.

MT: If you could tell NBA fans anything, what would it be?

Gil: Keep supporting the sport. Keep supporting it through the good times and the bad times. When athletes do stuff that hurts the NBA’s image, fans distance themselves. As good as it’s been, there’s gonna be bad times. Of course you rather have more good than bad any day.