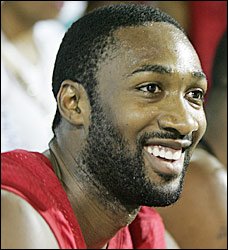 Surely you’ve heard the story of clothing designer Mark Ecko and the ball Barry Bonds hit for his record-breaking 756th homerun: Basically, Ecko dropped a little over $750,000 for the baseball, and then started an online vote to determine its fate. Among the choices, people could vote to have it sent into outer space, it could be donated to the Hall of Fame as is, or it could be branded with an asterisk.

After more than 10 million votes were recorded, the people elected to have an asterisk put on the ball. The Baseball Hall of Fame said they’d accept the ball because it’s an historical artifact, but didn’t necessarily agree with the asterisk.

Gilbert Arenas, man of the people that he is, now says that he wants to buy the ball from Ecko and he’s willing to pay $800,000 for it. From Dan Steinberg’s DC Sports Bog:

“It’s history,” Gil began. “It’s still history. I mean, the guy’s a man before he’s some big slugger. I mean, how you just going to take what this man’s done for his career and, as another man, say ‘Hey, you were accused of this, you allegedly did this, I want to take this away from you.’ I mean, what if we took away your Ecko company?”

“It depends,” Gilbert said. “If the Hall wants it, I’ll give it to the Hall, unmarked. If not, I’ll keep it. I’ll give it to Barry’s son. I don’t know, or at least do something positive with it, auction it off, build something, build some homes for the homeless, I don’t know. Do something positive. “I want to send it to space.” Did you hear that? “I want to send it to space?” As soon as he said that, I was like, is this Superman, sitting and waving all those nuclear bombs, sending them into space?”

For what it’s worth, I think what Ecko did (despite his claims to the contrary) is nothing more than a publicity stunt. Seriously, what would sending the ball into outer space prove? In these confusing times, it’s good to know that Gilbert is around to provide guidance and direction.