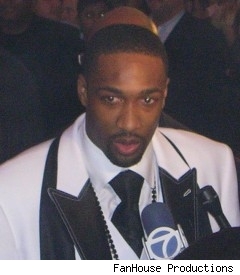 The big news from last night–bigger than KG’s game-winner, Vince’s poster on Nocioni, Kobe’s 10 dimes, and certainly bigger than the Mavs’ extension of their impressive winning streak–was the birthday party thrown in honor of Gilbert Arenas’ 25th birthday.

Puff Diddy was the host and according to some rumors, the event (held at Love, a DC-area club) cost a cool million bucks. One of the lucky people who managed to get their hands on the Arenas Express card was AOL’s Jamie Mottram. He was kind enough to take pictures and even got some footage of the festivities:

“Everybody, get drunk and make bad decisions.”

I’ll keep that in mind when I go out tonight, Gil. Thanks.

Also worth checking out: Shoals’ hilarious interview with one of the party’s attendees.