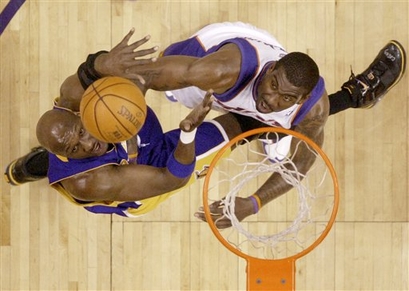 Well… good teams win series at home when they should. Congrats to the Suns and Spurs for moving on. It’s just a matter of the universe righting itself. Michael Finley hit 8 of 9 threes, the Suns didn’t even need to play their best, and now we’ve got a Suns-Spurs series in round 2. Two years ago, their conference Finals was short but sweet. San Antonio won it for the purists by playing defense and grind ‘em down slow ‘em up ball, but the lasting memory of that series was Amare Stoudemire making vicious love to Tim Duncan time and time again. The Spurs won the series, the Suns looked to have a bright future behind the best young player in the league, who was ahead of LeBron and Wade at that point.

There was a surgery or two, a lost season for Amare, and now he’s back. This is a revenge series for him. Oh, and the Suns are a well-oiled machine capable of outrunning anyone. Personally, I’m just bored of the Spurs. Three rings, Duncan’s the greatest… let someone else have some fun.

Denver and the Lakers, thank you for playing. The Nuggets put a little scare into people with the game 1 win, but by the time Big Shot Bob or “Rob” for those of you who get upset about those things, hit his backbreaker to make it 3-1, the series was over. Michael Finley, the forgotten former All-Star with all that saaaaaaaavy, could not miss. Kobe shot 33 times as the season ended, so there will be no talk of him giving up with his team going down. Great season for Kob, but I’m glad we have other topics to talk about than him. There were periods of time this season where I felt like I was working for Kobe’s personal website. I tried hard to move the discussion in other directions, but the mob would not let it be. Even Lang wrote a Kobe for MVP column. He was a lot of fun to debate about, what his role should be, his place in history, whatever. There are other great players in the NBA that are still alive in the playoffs.

Very excited for tonight. T-Mac can finally take that step into the second round, and Golden State and their rowdy fans have another chance to make history. As far as GS-Dallas goes, remember two years ago the Mavs lost the first two games of their first round series at home to the Rockets. Houston beat them in game 6 to send it back to Dallas for a do or die game 7. The Mavs won game 7 on their home floor by 40 points. It is a must-win for both teams tonight, cause Golden State is not winning a game 7 on the road after blowing it in game 5.