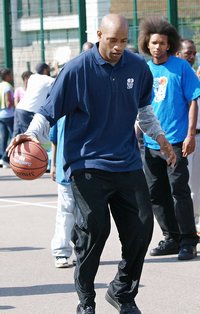 Nets writers, bloggers, and PR personnel spent much of their summer defending Vince Carter’s durability, and pointing out that over the last few years, VC has been unjustifiably labeled as being injury-prone.

Well, let’s see them try and spin this one: In the Nets’ first preseason game, which took place in Paris, Carter went down with a hamstring injury and did not finish the contest.

It took only 12 minutes for the Nets to encounter their first crisis of the season, and now it’s up to Vince Carter’s recuperative powers to determine the severity of it.

The shooting star strained his left hamstring while scoring on a runner in the second period of the team’s preseason opener at Bercy Arena in Paris yesterday, when the Nets scored a 100-98 overtime triumph over the Miami Heat.

Sorry Nets stakeholders, them’s the facts. It’s going to be one long season in the swamp.