Half Baked/Take THAT Comments Section! 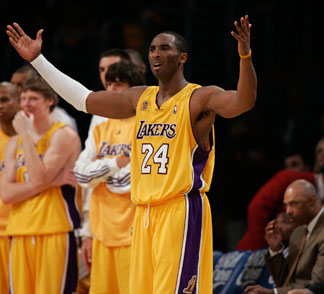 First of all, this was orginally meant to be a mere modest expression of opinion in this post. But as I continually pressed “Submit Comment” only to see my ethereal wisdom disappear into the abyss, I realized it was the SLAMonline Gods telling me that another glorious season is upon us and it was time to transcribe.

Either that, or the f–king interweb is a piece of s–t and lost my comment just like it does all of yours. I’m gonna believe in myself and go with the first one.

It was a cruel-yet eventful-summer for the NBA as player movements provided column fodder between scandals, but recently there has been a tenor of hope that the league can actually improve this year. So as the disdain for Donaghy dissipates, to celebrate tipoff this year we’re enjoying a time honored festivitiy that normally doesn’t appear on the horizon until the dawn of spring: Kobe Hating.

The Artist We Would Rather Know As Michael hasn’t had another public performance since this past summers one man extravaganza in which he went in on everyone from the owner to management to a 19 year old. Lately, his on court appearances have been far from entertaining as he looked distracted at best, Vince Carter at worst.

And as he waits in Los Angeles for an opportunity to challenge his namesake, Kobe Bryant has heard it all from everyone. Surely his response bears a striking similarity to my missing comment, and my missing comment to the words of another wise man…

“Kobe’s a b—h. His contract didn’t include a team upgrade as far as I know, so he should have been more careful negotiating it.” –F you. That’s why he’s so angry! He must have considered that when signing his extension, and to think that a man so competitive and preoccupied with his legacy wouldn’t is naive. Although it clearly wasn’t a part of the contract, it certainly came up during negotiations and it’s obvious what the answer must’ve been if he resigned. Which is exactly what Kobe said happened.

But a lengthy passage at the end of Phil’s “Last Season” details how Buss said he was going to be dialing things back. (Can’t…muster energy…..to..to tran…transcribe. Buy it yourself.) So Buss either knowingly lied to Kobe or he failed to fulfill his promise. Either way, Kobe is well within his boundaries to complain about it.

“Kobe should just shut the hell up and be loyal to the team that showed loyalty to him during his trial.” F–k you. Kobe remained in purple and gold out of loyalty, rather than go to Chicago or across the hall, when neither team would’ve had to give up anything. Which means that instead of this, we would almost certainly be talking about “Your defending Champion” Bulls or Clippers.

Instead he stayed. Knowing full well that he was going to take the heat for both Phil and Shaq leaving town, when in fact Buss told him that Shaq was leaving regardless of Kobe’s decision (Something Shaq himself said he believes…) and Phil already told Kobe that he himself wouldn’t be returning the following season. The man went with what was the worst of his three options under circumstances in which he knew he would bear the blame for the lowly state of that franchise. That’s loyalty.

Providing your prize asset some breathing room and a private jet during his trial so he could get back to win you more games and sell more merchandise? That’s just good business. What else were they gonna do? Sit him? Trade him? Ha.

“Kobe shouldn’t disrespect his teammates like that. These are NBA players with pride who can contribute if he’d give them the ball.” -F–k you. Phil called Kwame a pu–y and no one said a word. Then he said that all the team likes to do is watch porn and play video games. Then he said that Jesus Christ himself couldn’t save the Lakers, much less Kobe. Bryant hasn’t said anything close and he certainly hasn’t said anything about his teammates or managment that the media didn’t beat him to already. So why the double standard? Why can everyone else say that this team sucks, yet demand that Kobe make his teammates better? That’s also management’s job.

No matter how much better the front office expected the currently constructed team to get, it’s still clear that this is not a championship roster and that more moves needed to be made. Who was this teams last major acquisition? When Baron Davis was traded for pennies on the dollar and the Lakers didn’t make a move due to injury concerns, fine. But then they passed on Carlos Boozer. Then on Ron Artest. Then on Ron Artest again. Then on Jason F–king Kidd. And every time they had an excuse.

“Kobe has every right to be angry with the Lakers, but his public outbursts only hinder the teams progress team in trying to get him any help, since potential free agents wouldn’t know whether to believe if he’ll be there or not. (*CoughKGCough*) Besides, teams that would’ve taken on a trade not involving him, have been put on two year notice that if they can clear their cap, they could possibly sign him. Which would you rather do?” -You’re cool.

“Michael never would’ve done that”. – And f–k you. Michael wouldn’t what? Berate his teammates? Ha. Demand a trade? If push came to shove he would. So Money was willing to leave the Chi over his long standing feud with Reinsdorf & Krause, but he wouldn’t have demanded a trade? The way the media was wrapped around his finger? C’mon. He didn’t of course, but let’s not act as though it would have been out of character for him. The bottom line is that Kobe Bryant is experiencing what Michael Jordan would have had he continued to lose. Which is why he wants out as soon as possible. Annually carrying a woeful roster beyond reasonable expectations is worth very little when failing to fulfill the medias. And your own.

So when the front office is in absolute chaos and visibly wasting his prime, while he takes the blame for everything, then yeah. He’s gonna complain. A Whole f–king lot. So would Michael. And so would you.

But go ahead and give him hell.

When we should be talking about this. (NSFW!)