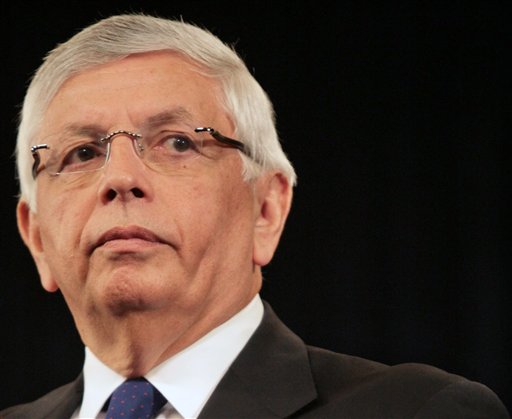 We thought we’d seen all of the David Stern faces by now.

The serious face. The hey-everybody-I’m-having-a-good-time-at-this-blowout-NBA-Finals-game-I-swear! face. The quit-berating-me-with-these-questions-Jim-Gray-and-start-asking-me-about-the -WNBA-All-Star-Game-like-you’d-arranged face. The I-just-gave-the-MVP-to-this-guy? face. The face — the one on the Dan Patrick Show that we never got to see, only hear — presumably on a head the size of a Macy’s Day Parade float and visibly better and more knowledgeable than everyone in the whole wide world! Put these things on collectible plates, they’ll sell out of the back of Tim Donaghy’s getaway car like hotcakes!

Yesterday we finally got the chance to see a face that we had always wanted to see.

David Stern withdrawn. He was passive. He was ultra-reticent.

For the first time since Sternbot was rolled out of the factory, we’ve caught him backing up. Finally! He’ll admit a mistake. He’ll admit to some semblance of humanness for the first time in about ten years. He’ll relinquish his omniscience. We are all one and he is merely a cog in the wheel like the rest of us. That’s all we’ve ever wanted anyway, was just some proof that he was a fan like us and he didn’t have a hand in any of this, and now we’re going to get it.

Now somebody take the screwdriver out of the toolbox, dive it in and turn. He’ll unfurl in front of all of us, admitting mistake after mistake; league secret after league secret. A barrage of questions from left and right. Reporters reporting, asking tough questions, and finally all the truth seeps out because they see David Stern prone, vulnerable.

MJ was banned for 18 months for betting, he’ll say. Ron Artest is secretly Bobby Brown in the Witness Protection Program. That new ball? Made of kitties.

Now all we need is someone to just ask the right question. Just one person. Just one…

“Commissioner Stern, bring me through the range of emotions you felt when you first heard the news.”

“How does it feel? What are your feelings? Would you like some Tylenol? Maybe a backrub? You look stressed.”

How about asking a real question pertaining to the importance of this investigation?

Maybe a follow-up question to these two statements: Stern admitted that the system “should have been better,” but also that he will stand by his referees because he believes this was a rogue ref in an “isolated incident?”

Hey, look, this question writes itself!

“Mr. Stern, if the system should’ve been better, but you will also stand by your referees, what action, exactly, are you taking to prevent other ‘rogue referees’ from surfacing in the future?”

Pretty simple, right? It’s like a formula, kinda, but you have to decipher things by yourself. I know, so much work!

“Considering all the security things you laid out for us, are you surprised or shocked something like this could slip through the cracks?”

Unsurprisingly, David Stern’s reaction was not: “No! Shocked!? I was delighted! I woke up June 20th with a voicemail from the FBI. I thought, ‘hey, this should be a fun, positive development for the NBA!'”

Instead we got a long, belabored response about nothing in particular.

And we can deal with the comparison drawn to German soccer leagues. We can even fathom you talking about NBA family picnics. But referencing the setup of the press conference that you’re currently holding to answer a question?

This is side-stepping. The very definition of it. And someone should have caught it.

By the end of the interview session, David Stern was almost upbeat and cheery. It sounded like he was on a break from the investigation; chatting it up with old chums, having a good time up there. Had I not known that he was going to a picnic afterwards, I would’ve assumed that the press conference was the highlight of his day.

But we never did. And we may never have another chance now. Because no one in the media even bothered to bring their screwdriver, nevermind use it.