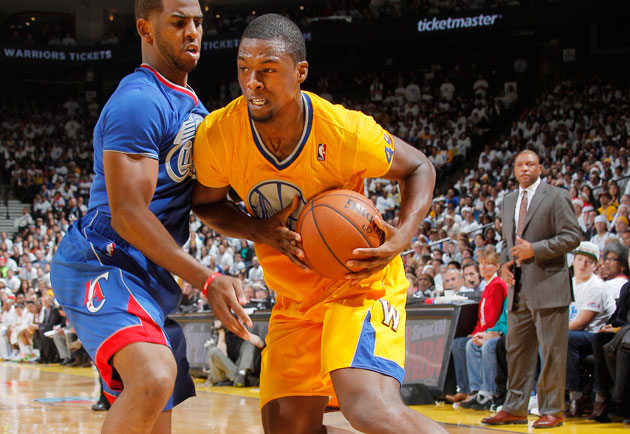 The seventh pick in the 2012 Draft was asked to do a lot last year. And then he was asked to do more. The 6-8 guard out of UNC started 81 games his rookie season, earning a spot on the All-Rookie First-Team. When David Lee suffered a torn hip flexor in the 2013 Playoffs, Barnes improved on his regular-season averages of 9.2 points and 4.1 rebounds.

With Lee limited to 65 minutes in six games, Barnes averaged 16 points and 6 rebounds in over 38 minutes per game during the 2013 Playoffs. He started 93 total games as the franchise experienced the postseason for only the second time in the last 19 years.

That summer, the Warriors signed Andre Iguodala to a four-year, $48 million deal. They acquired a versatile and defensive-minded swingman, putting their eggs in the win-now basket.

In order to complete the signing, the team was forced to relinquish veteran difference-makers Jarrett Jack and Carl Landry, who made big impacts off the bench last season. The move also forced Barnes to redefine his role.

On the change, Barnes says, “For the most part, you just want to try to focus on impacting the game. Whenever you get in, whether it’s five, 10, 15 minutes a game, whatever it may be, you just want to come in there, give guys a lift defensively, make the extra pass, score when needed, and try to ultimately just help the team win.”

While Barnes’ minutes have increased overall, his production has been up and down. On the recent seven-game road trip, he averaged 8.7 points in 26.5 minutes but has proven able to play big when counted on. In 15 starts this season, he averaged 14.3 points in over 38 minutes.

The Warriors have seemingly put it all together, winning 11 of their last 13 games.

Asked to compare this team to last season, Barnes says, “Just a lot of growth. Last year, we had a lot of guys who were hurt, a lot of guys that were still trying to make names for themselves. For example, Steph [Curry] has grown into being a tremendous player. Klay [Thompson] has made huge strides in his game. As a team, I think we’re starting to make a lot of improvements and overall, we’ve become a better team.”

Asked what he took away personally from his rookie campaign, he says, “The biggest thing I learned was how to be a professional. There’s so many games that you have to play, so many different obstacles that you have to go through, just coming into the league, playing on a team that had low expectations, but exceeded those. Went to the playoffs, did a lot of things. I definitely just learned how to be a professional, how to conduct yourself.”

While the assessment may be true, Barnes has been a pro from day one. On his poise, he says, “I thank (UNC men’s basketball) Coach Williams for that. He obviously helped me a long way just in terms of being prepared for the League. I honestly have to thank my vets for just helping me get through. Guys like Carl Landry, Jarrett Jack, Steph Curry, David Lee—guys that really helped me, showed me the ropes, how to be successful. When I came into the League, I was only accustomed to playing 30 games a year. And then to go play 82, to play in all different types of cities, through slumps, through high points, they just kind of were able to coach me through, how to stay levelheaded.”