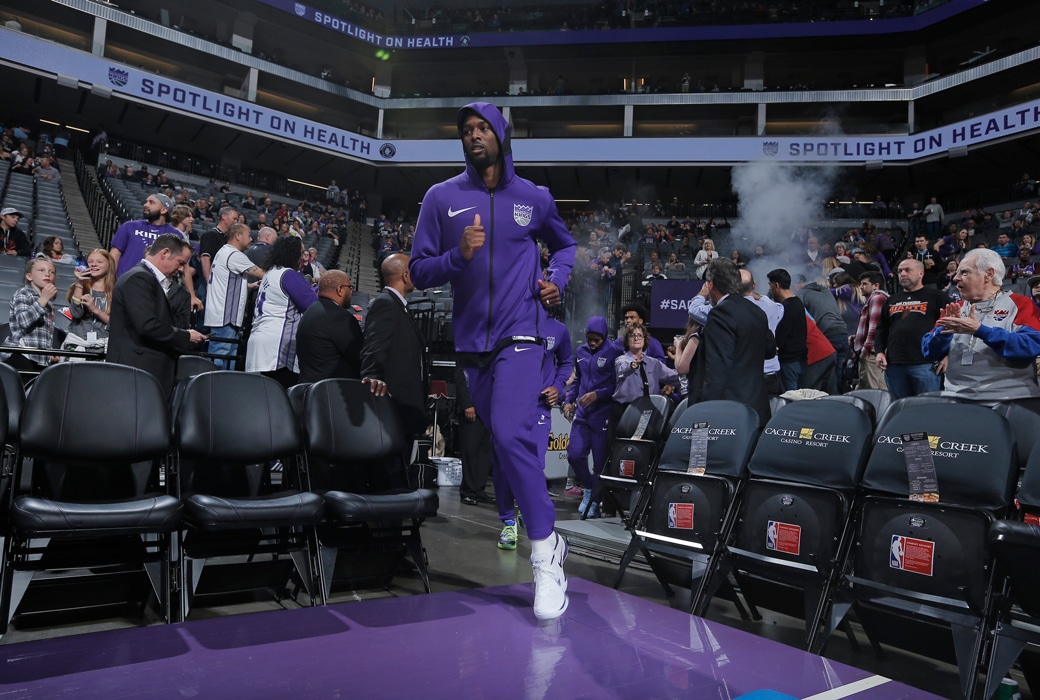 Harrison Barnes has had a busy offseason.

A couple of weeks ago, the 26-year-old forward traveled to India as a Sacramento Kings ambassador, then turned right around to help out with the burgeoning Jr NBA Global Championships regional games in Iowa, where he provided sound advice both on and off the court to the 13 and 14-year-old boys and girls participating. All eight regional tournaments in the U.S. will be shown live and on-demand on Flohoops.com, with select games airing live on Eleven Sports; and the championships will be held at ESPN’s sports complex at Walt Disney World in Orlando from August 6-11.

After being dealt to SAC at the 2019 trade deadline, Barnes averaged 14.3 points and 5.5 rebounds through 28 games.

SLAM got the chance to sit down with him to discuss his work with NBA JR, as well as his approach to the offseason and his future with the Kings:

SLAM: Can you talk about the work you’ve been doing with the JR NBA Global Championships?

HB: Yesterday, we had a life skills discussion where pretty much we talk to the kids about taking all the principles they use on the court and applying that off the court. So whether it’s character, respect, teamwork or community—things that can be used in everyday life.

SLAM: What do you personally get out of helping these kids not just on the court, but in life?

HB: Having been in their seats, I know what it’s like to want to play in the NBA and to have that dream. And for some of these kids, they’ll realize that dream, and that’s great, but for everyone in the room, you’re going to have a life after basketball no matter how long you play. And the things that you can hopefully learn from the game and mature and take from it in your everyday life, will be things that matter.

SLAM: The Jr NBA Championships are only in their second year. What would it have meant to you if this were around when you were a teenager?

HB: I mean, it would have been crazy to play in an NBA-style format with your AAU team and to have people from the League we can talk to and get advice from but also just from the coaches of NBA players. To have that experience at such a young age I think is really valuable and hopefully these kids learn a lot from it.

SLAM: Is it cool to think that you may be playing against these kids someday?

HB: Yeah, it is pretty cool. You’re seeing these games, maybe one or two of these kids may be in the League someday and they may be like, ‘Hey, I remember when we came to count some blows.’ So that’s a pretty cool feeling, but more importantly, I hope they all say, ‘Hey man, I got something out of what you said and I applied it to X,Y and Z.’

SLAM: I saw you were in India last week serving as the Kings ambassador. What was that trip like?

HB: India was great. I’m kind of doing the same type of thing here as over there, just seeing the game expand over there and seeing the curiosity and the hunger, it’s pretty cool to see how fast the game is growing and where it’s going as well.

SLAM: You played a lot of power forward with the Mavs, but the Kings have used you more as a small forward. Is there a certain position you’re more comfortable at?

HB: The League has changed so much from when I first came [in] until now, which is all pace-and space. To say that I’m one position or another? Nah, I’ll play whatever position is best for the team, whether it’s small forward, power forward…could be anything.

SLAM: You have a player option for next season. Do you know yet if you will accept or decline it?

HB: You know right now, I really haven’t put much thought into it. I had an enjoyable time last year in SAC. We’ve had discussions of what that might look [like] going forward, but at the end of the day, a lot of that will depend on what their goals and missions are come July, and I’ll find out then.

SLAM: What’s the goal for next season if you do re-up?

HB: The goal would be the same as it was this year: try to make the playoffs. Those young guys are mature beyond their years, and the city is very excited to be a part of it and take the next step.

SLAM: What’s the greatest piece of advice a teammate has ever given you?

HB: The main piece of advice is that it’s a marathon, not a sprint, and there’s so many things that can happen in between. Who gave it to me would probably be a mix between Jarrett Jack, Carl Landry, Shaun Livingston, Andre Iguodala, Andrew Bogut. Those have been my guys who really talked with me, worked with me, especially in the early days when there were a lot of ups and downs, so I’m definitely thankful for all those guys and everything they’ve done for me.

HB: What makes a great teammate is just somebody you can always count on, on and off the floor. I think about a guy like Shaun Livingston for example. He was one of those guys that I felt like he always checked up on me, always was there for me. When he first got to [Golden State], he was a quiet, reserved guy, so me just kind of seeing it from afar and then every interaction that we had, our friendship grew. That was big for me just to see and I definitely want to try to have that same impact on the guys that I’m with now. Just constantly being there, always checking up on them, ‘Hey, if you need anything, let me know, I got you.’ And then try to always come through.

SLAM: Who gives you the hardest time as a defender?

HB: Man…um…that’s a tough question. It’s more so team defense now more than anything. Teams that can throw a lot of guys at you that can switch…it’s hard to say one specific person.

SLAM: What aspect of your game are you looking to improve upon this offseason?

HB: Just looking at the numbers, shooting off the dribble is something I can improve on. Midrange and 3 are some areas I struggled in last year, so trying to bring those percentages up is something I want to get better at this summer.

Photos via NBAE and Getty.