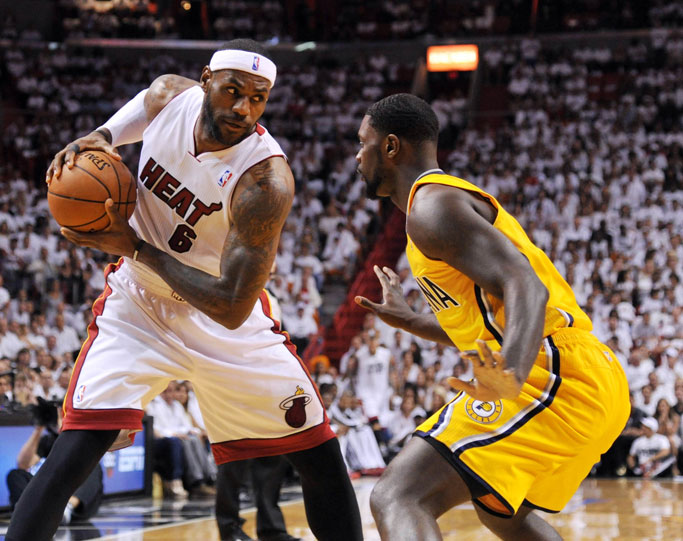 Flash back to June 3, 2013. Eastern Conference Finals, Game 7. Miami rolled past the Pacers, stretching their lead as the game wore on, exposing Indiana as a team that just wasn’t ready. Indiana vowed to come back even better, that they’d nab the top spot in the East to have that Game 7 on their home floor in 2014. About that Game 7…they didn’t quite get there.

The Heat ended Indiana’s season in ruthless fashion, eviscerating their challengers even more brutally than a season ago. The margin was 26 points at halftime. It climbed as high as 37 in the third quarter. One team played like the champions they are, the other played like they were ready to go fishing. Miami heads to its fourth straight Finals appearance, while the Pacers head into the offseason searching for answers as to what went wrong in their bizarre season.

Miami kept the pressure on for all 48 minutes. From the opening tip, LeBron James (25 points, 8-12 shooting, 6 assists) took his Game 5 frustrations out on the Pacers defense and eclipsing his point total from the previous game in the first quarter while whipping passes all over the court.

Chris Bosh (25 points, 10-14 from the field, 10 rebounds) tortured Roy Hibbert all night. Dwyane Wade (13-6-6) lit up Paul George, thoroughly outplaying him before the game got out of hand.

In between the Big Three, seemingly every Miami role player found a way to contribute. From Rashard Lewis (13 points, 3-7 from deep) continuing his hot shooting to Mario Chalmers and Norris Cole slicing through the Pacers’ D to Chris “Birdman” Andersen (9 points, 10 rebounds) swooping in on every board and putback opportunity in sight, the Heat got their most complete effort of the Playoffs.

Miami shot 58 percent, assisted on 24 of their 44 made field goals and poured in 50 points in the paint as they hammered the Pacers. They swarmed on defense, flying around with the abandon that they’d toned down for most of the season, even diving for balls in the fourth quarter leading by 35.

The Pacers simply did not show up ready to play. From the jump, Lance Stephenson (11 points) and David West (16 points, 8-11 shooting) were the only dudes in gold who acted like they were playing an elimination game. In the first half, those two had 23 points. The rest of the Pacers starters combined 9 points on 3-16 shooting.

Unfortunately for the Pacers, Lance didn’t listen to Larry Bird’s advice; he poked the bear one too many times. Stephenson kept doing all the little things to piss off LeBron, going as far as to stick a hand in his mouth during a timeout, prompting James and Udonis Haslem to say some very explicit things to him. Finally, Lance caught Cole in the face with something resembling an open-handed punch, earning himself a flagrant foul. Stephenson didn’t score again from that point—8:47 remaining in the second—and the rout was on in earnest.

As for the rest of the Pacers, PG eventually turned it on in the second half, finishing with 29 after just a single point in the first half, but it was too little, far too late.

Lance’s antics leave his future up for debate, along with the rest of the Pacers. Still only 23 years old, Stephenson is heading into unrestricted free agency. The Pacers will have to make a tough decision on him, as he’s sure to have at least one team throw big money at him, despite his behavior in these Eastern Conference finals. That leaves Indy in a bind, as they’re already capped out and don’t have much flexibility.

For Miami, they’re looking at a chance at history. They’re the first team since the 1984-87 Celtics to make it to four straight Finals and only the third team ever to do it. They head there with a second date with either the Thunder or Spurs looming, but are playing some of their best ball of the year. Bosh was locked in over the final three games of this ECF, averaging 23 in Games 4-6 after putting in just 9 per game in the first three games. DWade, meanwhile, is the healthiest he’s been in at least two years after a season filled with rest. And LeBron, despite racking up an extra season of basketball over four Playoffs runs and the Olympics since coming to Miami, is still managing to find higher levels to hit. While 2013 savior Mike Miller ain’t walking through that door, Lewis, Shane Battier and, of course, Ray Allen are still around to make clutch triples for Miami.

For now, the Heat wait for the Western Conference finals to wrap up. The 2014 Finals kick off on June 5.