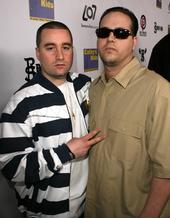 As hip-hop and hoops are usually paired together, it’s not surprising that some rappers are screaming back at their favorite troubled NBA teams. As the New York Knicks struggle with a 9-24 record, veteran New York rapper Genovese and his group-mate Gustapo (who does the hook on “Fire Isiah”) decided to take a stand for the Knick nation. Genovese (left) and Gustapo (right) dropped “Fire Isiah,” a song calling for Isiah Thomas to be fired, via their myspace page and website.

This morning, Marc Berman of the New York Post mentioned the group’s ode to the head coach in his Knicks column, the morning after the Knicks 105-100 win over Chicago. However, SLAM Online spoke with Genovese and Gustapo just moments before the song was posted online.

SLAM: What motivated you to make this song?

GENOVESE: Basically, I’ve been a Knicks fan since I was a kid. I saw them through the 80’s, the 90’s and it gets to a point where even though I’m patient enough to wait to have a good team, with the whole scandal and all, it turned one of the greatest franchises ever in the a mochery. I always respected Isiah as a player and how he was on the court back in the day, but he brought us to a point where people come into the Garden and they’re laughing at us and they know they’re going to beat us. Back in the days, you couldn’t walk on the Garden court and get an easy lay-up, Charles Oakley would throw you to the ground. They just played with a lot of pride and now it’s just a joke. That can’t happen in New York, something has to be done.

GUSTAPO: Being a New Yorker and having a love for sports, I have pride in all our teams. I just feel it’s time that the Knicks need to shake things up and I think it’s the fans job to get the team to shake things up. Booing in the arena or just voicing your opinion is a way to make a difference. Being that we’re into music, we decided to speak on the Knicks through that. First Cousins shaking things up and getting rid of Isiah.

SLAM: Many of our readers are from outside New York, can you give us a run-down on your career?

GENOVESE: I started in the mid-90’s and I got on a lot of DJ Clue tapes. I did a lot of songs with the Lox and I was affiliated with DMX and everybody over there in Yonkers. I did my thing in the street for a while, got my name up, got a deal with Universal, but things didn’t work out. Since then I have been doing my thing independently with my cousin, doing the First Cousins group thing. Basically, that’s then ten year run down. We’ve got an album coming out in the spring of this year and we’ve got a lot a lot of things going on, so it’s great that this song is coming out.

GUSTAPO: Basically, I run an independent record label called ILLSEED entertainment. First Cousins is the project we’re pushing right now. We’re about to put the album out through EMI. I’m a New York rapper, I’ve been on Hot 97 a bunch of times, Power 105 too. We’re on a lot of mixtapes out here. My man Eagle and I had cameo roles in The 25th Hour. We own a recording studio in Middle Village, Queens and we deal with a lot of people in and around the city. We’ve been involved with some NBA guys. Lamar Odom of the Lakers played high school ball in our neighborhood at Christ the King and his label and artist, Ali Vegas, work out of our studio a lot.

SLAM: You grew up in Westchester and the Knicks have been practicing in there for years. How long have you been a fan?

GENOVESE: My uncle put me on to the Knicks when I was young in the Bernard King times. They had Trent Tucker and Rory Sparrow, I suffered because they were never that good. They got Ewing, Mark Jackson and Pat Riley and things turned around, so I have been through everything. In high school I fought with all the Bulls fans that loved Jordan. Me and my boy Tommy used to watch every game. We have every Knicks jersey, sneakers and shit. I was one of them old school fans. I have to watch them even if they suck, I can’t not watch them. Now, it turned into such a joke I felt I had to do this for the fans of New York.

SLAM: What do you feel like has to happen for the Knicks to turn around?

GENOVESE: First off, I know the Dolan’s aren’t really going anywhere and they are a big problem. They just don’t care. Really, the whole thing is we have to start with getting rid of Isiah as the President, GM, and Coach. Kiki would have been a good person to get, West, Mullin or someone like that. Maybe they could hire Mark Jackson as a coach. They just need to bring New York back, start fresh! Get rid of some players. We have to keep the Lee’s, the Nate’s, there are certain young dudes like Chandler and Balkman, we got some good young players, but we don’t mix. We need the right GM and the right Coach to put the right team together and bring it back to New York with some hard defense and people that want to play for the Knicks and rep New York.

SLAM: Do you feel like the fans should be expressing their opinions about the Knicks more?

GENOVESE: It’s hard for me to say. Every fan has their own feelings about it. Some fans might like Isiah. His time, to me, is worn out. When the team stops believing in you, it’s time to move on. There are people playing $3,000 a seat and this is what they came to see? If you are that much of Knick fan, that’s real that you are trying to support their team and move forward. All these years, struggling as a Knick fan, it took me only a few minutes to put this song together.

GENOVESE: Right now, we’re working on the First Cousins project with my cousin Gustapo from Queens. We’re putting it out through EMI this spring. The album is called, This Ain’t Friends… It’s Family and you can look us up on myspace at; www.myspace.com/firstcousinsmusic. Check out, what we’re doing and rep the music.