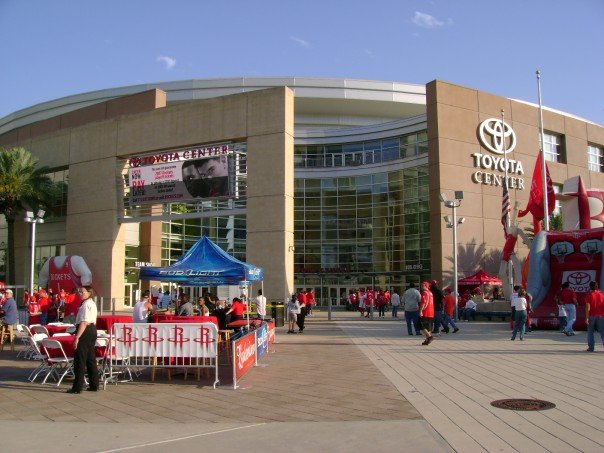 The NBA’s reputation of its teams being the most progressive at conserving energy was further bolstered recently in the unlikeliest of places. Houston, home to stifling traffic, even more stifling summer temperatures and a reputation for roads lined with gas-guzzling trucks, is now the fourth city to house a LEED-certified NBA arena after Toyota Center attained Silver certification June 2.

An April article in this space explained the process by which Phillips Arena (Atlanta), AmericanAirlines Arena (Miami) and Rose Garden (Portland) were the first three NBA arenas which secured the right to become LEED-certified. (LEED is a green building certification system developed by the U.S. Green Building Council.) Toyota Center is officially apart of the club with a Silver rating, the third-highest rating behind Gold and then Platinum. The certification is a coupe for Leslie Alexander, the energy-conscious owner of Toyota Center and the Houston Rockets.

“Environmental responsibility is extremely important to Mr. Alexander,” said Scott Manley, Director of Event Operations at  Toyota Center. “Applying for LEED was done on a voluntary basis so we looked at that as an opportunity to take a leadership role. That’s how we initiated it.”

Gold was in the sights for the Toyota Center, but it would’ve been impractical to reach for it. According to Greg Poole, Director

of Facility Operations at Toyota Center, two of the eight additional points that would’ve taken the project to a 55-point rating — good for Gold — would’ve involved installing a $100,000 submetering system and maintenance program. Given that the entire project cost up to that point was $77,000, the desire to install the submetering system never gained traction. “We felt like it wasn’t worth it that point,” Poole said.

Instead, Manley, Poole and an eight-person staff worked on a plan centered around five key areas, starting with a 50 percent reduction of landscape watering requirements.

A slew of native plants comprise various landscaped areas surrounding the arena and the sprinkler system was altered to more efficiently water those areas, including the implementation of an drip system which waters plants directly at their roots. The reduction will cut water usage to 350 gallons per year. By comparison, the United States Environmental Protection Agency states on its website that the average American family of four can use 400 gallons of water per day.

The introduction of a green cleaning program, including mats that reduce particulates in the building as people enter, and increased indoor air quality were two additional programs which aided the overall reduction of energy use in the building. Some efforts are less noticeable to fans than others but they all contribute toward a shared goal: making a building operate as efficiently and cleanly as possible. That’s something that didn’t just begin once the Toyota Center started its LEED application process in August 2008.

“We were always really aggressive in trying to reduce our energy and our footprint,” Poole said. “We wanted some validation of what we were doing.”

Aiming for LEED certification gave the Toyota Center staff a “road map” to that goal, as Poole described it. That map didn’t contain many points of contact with a large utility firm, as has been the case in other sports arena LEED projects. Instead, a consultant from Riehl Engineering in Houston was brought on to provide day-to-day support for the complicated application process.

“The more [building features] you submit, the harder it is,” Poole said of filing an application. “We’re not a typical office building. The information we’re supplying is a little bit different from what they want to see. We have to make arguments back and forth for why we feel like we’re matching what they’re asking for.”

Another of the five key features provided a look at the complexities in sports arenas going through the LEED process. In attempting to optimize the Toyota Center’s energy performance, Poole and Manley tried to gain Energy Star recognition.

“[It’s] an energy rating system that LEED uses to compare similar buildings and their energy usage,” Poole wrote in a follow-up e-mail message. “Currently Energy Star does not have a specific rating/grouping for arenas and stadiums. At this point, there is no way to get an Energy Star rating. Arenas attempting to get the points within LEED that are associated with Energy Star have to submit any data they have with regards to energy consumption in hopes that Energy Star qualifies us in some way.”

Toyota Center was awarded with six out of a possible 15 points for that building feature, which is of critical importance based on the arena’s location. It’s quite a task to cool the 750,000 square-foot building the brutal summer months, when the temperature is frequently in the low to mid-90s.

“To cool down the building for an event takes serious amounts of power,” Poole said. The building hosted 150 events in 2009, so a significant energy reduction in the building can’t take place without an efficient cooling system. And when there isn’t an event slated for Toyota Center, the staff makes sure to shut down as many building components as possible.

The final component to the core of Toyota Center’s upgrades is representative of Houston’s growing green awareness. A Green Committee at Toyota Center helps set up various events educating fans on how to conserve energy. An e-cycling event at the end of this past season netted 30,000 pounds of TVs and computers from people looking to recycle the products.

The committee also set up an office recycling program in which all office trash cans were removed and recycling stations were established. The program has led the arena to recycle 14-15 tons of products per month, which includes paper, cardboard, plastic and aluminum.

“Everything you throw out in an office at the end of the day is somewhat recyclable,” Poole said.

While Houston appears to be an unlikely city to spring forth green awareness, it’s become vastly more progressive since the Toyota Center began its LEED process.

“When we started there were only a couple buildings that were LEED-certified,” Poole said. “Now, there are quite a few.”

There are 102, to be exact. That’s the number of LEED-certified commercial buildings in Houston and its surrounding suburbs, according to the Texas Gulf Coast chapter of the U.S. Green Building Council.

In April, Houston was ranked 10th in a study by The Nielsen Company of the U.S. cities most likely to participate in renewable energy programs derived from natural resources such as the sun, the wind, water, geothermal and biomass.

Toyota Center visitors will be seeing even more green in the future — greens they can actually eat. A rooftop vegetable garden is being planned in conjunction with local gardening agencies. The goal is to provide a sustainable table at one restaurant in the arena which would include vegetables, herbs and spices. It’s about as locally grown as food can get.

It’s all apart of a plan to not only make the arena run at an efficient energy level but to set an example for more local business and, perhaps to a lesser extent, future NBA LEED arenas. More are coming and it’s only a matter of time every sports complex is expected to be LEED-certified from the first day of its public opening.