How the Draft looks from China 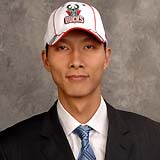 As you all can probably imagine, the selections of Yi Jianlin and Sun Yue in last week’s Draft are being treated as big, big news here in China. Interestingly, the press either doesn’t seem to realize (doubtful) or chooses to ignore (much more likely) that as a second-round pick, Sun is not guaranteed a roster spot. He is being written about as a sure thing, China’s fifth NBA player (after Wang Zhizhi, Mangke Bateer, Yao Ming and Yi).

As for Yi, they seem to be downplaying his unhappiness with the Bucks. I’m reading about it on American websites but so much in Chinese press, at least not yet. It was, however, reported that he was disappointed not the selected by a team such as “run and fire” Golden State Warriors.

It seems like a big, big mistake to me for Yi’s agents to be publicly agitating for a trade. I think Yi has the potential to be really good but it’s not a sure thing by any means. He is going to need some time and a great environment and if they create a hostile situation in which people are looking to see if he’s any good. I don’t think he needs the pressure.

Sun is interesting. A lot of people have been asking me about him. I haven’t seen him play much the last two years as he has been in Los Angeles, where his CBA team the Aoshen Olympians played in the ABA. (That’s a long and convoluted story.)

I have met Sun, however. In October, 2005, not long after arriving in Beijing, I met with him the day after his 20th birthday in an empty conference room in Aoshen’s downtown Beijing headquarters. He was in town for one day between the East Asian Games in Macou and a flight to LA, where the rest of the team had been practicing and playing for four months.

Sun entered the drafty room wearing a pair of faux spray-painted Ecko jeans and a maroon leather jacket, sporting a small cross in his left ear and a silver necklace around his neck. His hair was stylishly coiffed. I was struck by Sun’s size; he looked every bit his listed 6-7. And despite the official word, and Sun’s own admonition that he desperately need to gain weight and upper body strength, his shoulders looked broad and square, his arms anything but gangly.

“Everyone calls me Q Tip,” Sun said, surprising me by speaking in English, ignoring my Chinese teacher, whom I had brought along to interpret. “But I don’t know why.”

Sun was already being hyped as a potential NBA player, not least by his team, but even he wouldn’t go that far. “Right now I am not mature enough to play in the NBA,” he said to the interpreter, speaking Chinese again, careful to have these words properly understood. “I only hope that some day I will be.”

We will soon see if that day has come.

A day or two after the draft, Sun and Yi both held conference call interview sessions with the Chinese press. Here are some highlights.

Sun Yue comes first. He had just mentioned how he played in LA for the past two seasons and knows the city pretty well and is excited at the opportunity to remain there.

Q: How is your level of English now?

A: I’ve been in the States for two years already, and we also had American assistant coaches on the Aoshen team, my English has improved bit by bit over the past years. I can manage day to day conversations and also communication on court.

A: I can’t say completely, but more or less. Sometimes when I don’t understand I would ask them, they’re very willing to explain to me too and I take notes. Practicing and using it repetitively helps me to remember those words better.

These questions and answers from Yi are not as classic, but still pretty good.

Q: There are a lot of young players in Jiansu who have the same dream about the NBA like you do. What advice or suggestions do you have for them?

A: I believe that everyone teenager should live to make their dream happen, everyone should strive to realize their dreams. I hope that there will be the day when their dreams come!

Q: You were still outside the doors of the NBA an hour ago, and an hour later you’ve stepped into the NBA. How did you feel before and after that hour?

A: I felt like riding on a roller-coaster, was very excited and emotional. An hour later I’m back to feeling simply nervous, getting ready for a new beginning.