How to judge Amare Stoudemire’s judgment 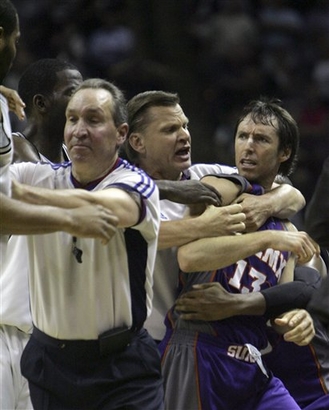 Everybody saw what happened last night. Once again, a tough decision will be put into the hands of the NBA powers that be. Cub will have the more thorough game recap in a little while, but first here is a quick recap of the events of the end of the fourth quarter that made this situation particularly interesting.

-With the Spurs leading by one, Amare holds his ground as Tim Duncan tries to deliver the big basket once again. Amare makes the shot tough for Tim, and it doesn’t go in.

-Nash pushes it the other way and gets it to Amare with a behind the back pass in traffic for the bucket that gives Phoenix a one point lead. Amare, who blew so many big, close shots in game 1, used those soft hands to hold onto the ball, and the finish was not a given.

-Next possession, Michael Finley misses a shot, Nash finds Amare with a second straight behind the back pass and Amare finishes. If I may get all hyperbolic for the moment, those were the two biggest baskets of his career back to back. In a building where the crowd is yelling “dirty” every time he touches the ball, where Amare had set himself up to be the villain for whining to the media about Bowen and Manu, he made three key plays at the very end to turn the series in Phoenix’s favor.

-The Suns play MORE defense with Raja pressuring Manu into a miss. Robert Horry delivers Steve Nash the forearm smash. Amare and Boris Diaw start to rush onto the floor, but are restrained a few seconds too late as they violate one of the NBA’s dumber rules. Phoenix seals it at the line, though Nash missed some free throws, possibly caused by the wooziness from getting slammed into the boards.

I posted a comment to this effect last night, but if Amare and/or Diaw are suspended, was that the biggest shot of Big Shot Rob’s career? If Tim Duncan goes for 40 and 20 against the Amare-less Suns in game 5 and the Spurs win a championship, is it tainted? Amare might have had a moment of stupidity by walking onto the court, so do you think he deserves his possible suspension? Feel free to comment. I personally would say no, because then what’s stopping role players from taking shots at stars? Should Amare be expected to have the self-restraint to think “Oh hey it’s the biggest game of the year, we got a huge stop and there goes my teammate, my point guard, the two time MVP with the ball. Oh look at that, one of the players on the team I’ve been accusing as dirty who is twice his size, just took a cheap shot at him. Hey I’ll just stand here and watch.”

Hopefully the NBA won’t be so literal and Amare will be allowed to suit up for game 5. The same goes for Diaw, but I’m focusing on Amare cause he went from delivering at both ends of the floor at the key point of the NBA season so far, and moments later he might have cost his team their season because he had a reaction to seeing his teammate get victimized by a cheap shot. Nash may have flopped a little bit, but a shoulder check into the boards is a shoulder check into the boards. It was probably a frustration foul from Robert Horry, and if you want to defend him, add it to the list of Spurs “coincidentally dirty plays.”

Maybe I’m just saying that because I’m blatantly cheering for the Suns? This was a championship team galvanizing type of win. They beat a tougher, more physical team on the road, coming back from down double figures late in the fourth, about to drop into a 3-1 series chasm. They won it at both ends of the floor, with their players having their manhood questioned all week long, and they responded like champions. The refs also gave them many of the calls throughout the game. Nicely done, Stern. I know the Suns have been farther than this in the playoffs, but the feel of the win was one of those special moments that we remember as “the next step” for a champion. Again, the Suns played great defense in crunch time, and Amare the villain of San Antonio, came up with 3 key plays in the final moments, before the Horry check.

Craig Sager’s interview with Nash was priceless. He referenced Big Shot Rob taking a big shot at him, and you could hear Nash deadpan “Ha. Good one.” It was also pretty amazing that this was the night that Shaq would be in the studio with TNT. Is there any other situation where a professional police officer would be asked to analyze a basketball game and the NBA rule book? Shaq had to emphasize that rules are rules and the Suns are guilty. What are the odds that a lawman would be on the set on the one night where the letter of the law was put into question?

This is going to be a long-running open-ended discussion. Have fun with that.

Before all of the Phoenix-San Antonio mayhem took place, Jake and I went to the Nets-Cavs game. He’ll have much more on that later this afternoon some time. Getting there was an adventure in itself. A slow moving adventure featuring a ridiculous amount of traffic. Maybe Jake will choose to detail that, maybe he won’t. I understand either way. Just to pre-emptively defend myself, I’m slightly ashamed of my behavior the day after Mother’s Day. After being honked at one two many times, I may have yelled out “Don’t (profanity) honk at me you grandma (more profanity, more profanity, more profanity)!” We got to the game late, and due to some credential problems didn’t get to our seats until sometime in the second quarter. Jake will have the rest. Not the greatest final possession for the Nets. Their season is pretty much over.

Eagles (starting?) QB Donovan McNabb was at the game. Didn’t see Kevin Kolb anywhere. That line was for Khalid, though its not like I have any comeback if he were to insult my team.

I stayed up later than usual after absorbing much of the post-game to watch Heroes. It was sub-par, yeah I said it!