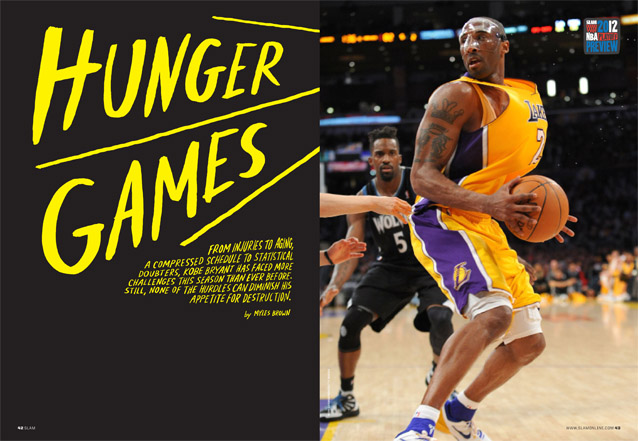 SLAM 158 is only on sale for another few days, so if you’ve yet to, be sure to pick it up on newsstands ASAP. Below is one of the four (!) cover stories—a Kobe Bryant feature, written by our man Myles Brown. Enjoy.

It was a balmy March day in Minneapolis, but Kobe Bryant was still ice cold. After consecutive losses to the lowly Wizards and Pistons in which he converted only 17 of a combined 57 attempts, Bryant found the rims in the Target Center to be just as unforgiving. Seven of his first 10 shots missed their mark, and Los Angeles trailed the upstart Timberwolves by a dozen after one quarter.

After the Lakers inevitably clawed their way back into the contest, Bryant had the ball again with five minutes remaining. Posted up 15 feet from the basket, he cleared space from his defender with one arm and caught an entry pass with the other. He faked right for a sliver of space, before spinning left, fading back and firing. No surprise, he made it.

A minute later, Kobe posted up on the opposite block. A swift reverse pivot forced his defender to inch back, leaving the baseline open and Bryant exploded toward the rim for a violent dunk. With that, Los Angeles seized the lead and would not look back. Some timely baskets from the Wolves added some suspense, yet their efforts were denied again by Kobe, who casually sank four free throws to seal a road victory. Home fans and bandwagoners alike left the arena convinced they’d witnessed the inevitable: a man without peer, invoking his will as he pleased.

For a career as embattled as the 33-year-old Bryant’s, it’s strange to consider that he’s never had a rival. Yes, there have been feuds, yet no opponent has continually stood between him and greatness. There was no Bird to his Magic, no Wilt to his Russell, not even a Drexler to his Jordan. There’s just been Kobe, left to battle with his own demons, which may or may not even exist depending on your opinion of the man. Over the past few seasons, though, the cognoscenti have found a new foe to stare Kobe down every night: numbers.

The era of advanced statistics dawned on the basketball world some time ago, and they are now considered invaluable to a franchise’s decision making. Synergy Sports and StatsCube are bookmarked by both fans and media, while terms such as PER and True Shooting Percentage have littered the lexicon. There will always be concerns that such a fluid sport can’t be properly encapsulated by these statistics, but it’s clear that they’re here to stay. It’s also clear that these numbers aren’t always fond of Kobe.

Sports will always have its clichés and superlatives. We can only hope to contain some players. The greatest players are assassins, ice water flowing through their veins, etc and so on. Kobe has benefited from these phrases. They’re breathlessly uttered during every fourth quarter that builds his legend. According to practically every “clutch” statistic available, however, KobeTime exists in name only.

From 2003 to 2008, prime years for the shooting guard, Bryant attempted 56 clutch shots (five minutes or less, neither team leading by more than five). Of course, countless shoe commercials, magazine covers and highlight reels would lead us to believe Kobe made damn near every one of those shots. In actuality, he made 14, just four more than Ricky Davis, who took 28 such shots. Furthermore, according to the data, Bryant hasn’t made a “clutch” shot in the Playoffs since 2008.

Even more damning is his usage rate. Whether by a field-goal attempt, a free-throw attempt or a turnover, a player’s usage rate calculates the percentage of possessions “used” while on the court. Though currently resting at 37.22 (5 points higher than Russell Westbrook, the League’s second-highest rate), earlier this season, Bryant’s usage rate was an unfathomable 39.9, easily the highest of his career or any other player to ever set foot in the NBA.

Granted, a lockout, a new coach and significant roster turnover have led Kobe to assume a yeoman’s workload, but mainstays Pau Gasol and Andrew Bynum have alternately watched in awe and annoyance as he continues to heave. Their subtle mentions of trust and ball movement may be revealing, or even reminiscent of yesteryear when Kobe’s shot selection was frequently called into question, however now they’re little more than sound bites. The numbers are unbiased and unforgiving, and according to critics, the numbers speak for themselves.

So what does Kobe think of advanced statistics? Well, after silencing the Wolves, Bryant told us exactly what you’d expect.

“I learned from a man that’s won Championships over and over and over again that he never paid attention to that nonsense. It was all about a feel for the game and the timing of things and the momentum of things that was vastly more important than statistical data.”

Thing is, he’s right. Basketball is a game of snap decisions and every possession requires a player to live in the moment, not in the past or on a spreadsheet. Proponents of advanced stats will counter that the data is merely a reflection of those decisions; that personal improvement or insight into an opponent’s tendencies can be gleaned from them. Bryant’s ethos, however, is strikingly simple: He always believes his next shot is going in.

He’s not the only one who thinks so, either. Kobe annually tops the League’s GM Survey as the most clutch player, and faithful legions of fans will gladly retweet those sentiments. The numbers still loom large, though. How can they be wrong? Does this mean we’re willfully living in denial? Is he? Even the video can’t lie. He earns our respect by making tough shots, but aren’t many of them bad?

That depends on whom you ask. Look at what coaches run in clutch moments—not only the Lakers, but the entire League. There aren’t many fluid or inclusive sets, if only because they’re too easy to disrupt. Instead, we get the hero, dribbling out the clock before attempting the impossible. In their minds, it’s safer. The alpha dog nature of late-game playcalling may rankle critics, but our Pavlovian response to buzzers demands it.

There are no simple answers anymore, only opposing needs and desires. Kobe wants to win. This is inarguable. Kobe also wants to win his way. Problem is, when the Lakers are mentioned as title favorites, the primary reason isn’t Kobe—it’s the frontcourt. At times, though, Kobe seems to struggle with that notion. Bynum and Gasol can occasionally appear pensive, sluggish or unfocused, even with the ball. Besides, deference conflicts with Kobe’s drive to be the best: an admirable ambition that many Laker faithful have accepted, even when it leads him astray. For Kobe, it’s an attitude borne of preternatural ability and competitiveness, yet more importantly, a viewership enamored with legend making.

Which brings us to the mask. Kobe tore ligaments in his wrist during the preseason. Those arthritic fingers of his were still there, the aging knees, too. They’re never going away, so he ignores them, just as he does each new injury. Then he goes on a rampage to prove he’s fine. January’s streak of four straight 40-point games was little more than a yearly checkup. Kobe certainly deserved commendation just for making the All-Star team, but the fact that we shrugged off his broken nose and concussion sustained during the game is a testament to the standard he’s set for himself.

Of course, Bryant passed all tests in accordance with the League’s concussion policy and promptly dropped 30 in three straight victories. Then came those unfortunate visits to Detroit and Washington, followed by five more victories. Greatness has its ebb and flow; greatness in its 16th season will have more than a few off nights. That being said, the Lakers’ winning streak was snapped the next game, as Kobe shot 3-20. Once again, there we were after the buzzer, shaking our heads disapprovingly as though he’d broken curfew and crashed the minivan.

Chastising Kobe is part of the viewing experience. Whether it’s for perceived crimes against the game, his teammates, the public or simply because someone else is more endearing, a red X covers his face in the instruction manual of How to Win Hearts and Minds. Yet his continued success and increasingly convincing disregard for approval reinforce the truth: “Hero ball” may not appease any antiquated sense of the game’s principles, but it’s directly applicable to the bottom line. It’s what we pay to see.

If Michael Jordan taught us anything, it’s that how you win matters as much  as winning itself. He was hell-bent on disproving the notion that a scoring champion couldn’t win a ring. He dared opponents to stop him in the waning seconds, even when they knew what was coming. As the ball settled through the net to the applause of millions, his clenched fist and flexed forearm left no doubt as to the will that coursed through his veins. (The statistically inclined would remind us that Jordan didn’t actually win a Championship until he learned how to share, but if pressed, they’d also admit this supposed change happened more in narrative than in practice.) Michael took on any and every challenge, and we loved him for it. But the moment he left, we began our search for another.

Kobe has faithfully followed this model for good or ill. Yet Jordan often took those shots as a matter of necessity; Scottie  Pippen was a timeless talent, but he wasn’t 7-1 or 300 pounds. It’s more difficult for Kobe to plead hardship with an All-Star at center for most of his career. On those nights Bryant performs poorly yet still emerges victorious, many of us are all too tempted to dismiss him with the refrain of, “He can’t do it alone.” Regardless of whether this is true, or even logical, he has still accepted the challenge. Whether we admit it or not, we wanted him to.

Any given night, if he shoots and fails, his role as villain and pariah remains intact. If he succeeds, we might see something we’ll never witness again. If he feeds the post and the Lakers still lose, it’s time to shoot again. No other player has been alternately mocked and praised over the course of their career. No other player has such a singular mindset. This probably isn’t coincidence.

So let’s forget his numbers. They’ll never fully shift the narrative, dull his image or reshape his legacy. They may indeed hold the keys to victory, but they also miss the point. The platitudes of teamwork, dedication and sacrifice are for children; what we really want is to be entertained. We thirst for iconic performances; signature moments of athletic excellence that make our eyes bulge and time stand still. Passing may be the right thing to do, but as LeBron can attest, it’s not always what we want to see. Kobe’s way isn’t always the best way, but win or lose, it is the most fun.

In that sense, while Kobe may be indulging himself, he’s also indulging us.