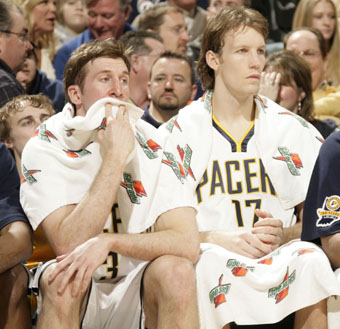 By Nation of Islam Sportsblog

The Indiana Pacers are engaged in not just a rebuilding effort, but a redefining effort.

Basketball is business. And the moves and direction the Pacers have made and are going clearly demonstrate that this season, the Pacers are all about selling tickets and putting out a team that -whether it is a winner or not- is competitive enough to be well received by their fans and get the team back to profitability.

With a starting rotation that features little star power (other than an unhappy Jermaine O’Neal), the focus will be on ‘hustle’, fundamentals and teamwork and less on individual achievement. With guys like Troy Murphy, Mike Dunleavy and Travis Diener, this is no surprise. They fit the mold of the hustling, fundamentally sound team guy. The mold that the Pacers want their fans to perceive the team in.

With that in mind, the Pacers are developing their marketing with coach Jim O’Brien as the central figure. And not the players. One of the main poster ads is simply O’Brien standing next Larry Bird.

Clearly, after some of the on court and off court incidents that the Pacers have dealt with the past few years, there is a need to re-establish their relationship with their fan base. And, just as clearly, the team’s marketing strategy, roster and coaching moves exemplify who makes up the fan base to which the organization is trying to appeal.

The possibility that a team can effectively build itself around a marketing principle aimed at redefining the team, while at the same time field a winning team is not great. Particularly when the concept is to try to fit the character of the team to the market’s ‘values’.

But, cutting past it all, the motivation for the Pacers new direction and new image is easily discernible.

Part of the shift, Tom Hirschauer (president of the Pacers’ ad agency Publicis Indianapolis) said, is because many Pacers fans in this “conservative market” don’t identify with the “hip-hop” culture some in the NBA have cultivated in recent years.

Redefining the team and moving back to profitability is a game of colors.

The Pacers believe that to get out of the red in their ledger, they need more ‘white’ on the court.