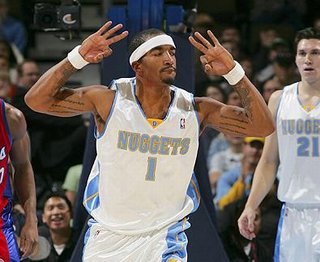 When J.R. Smith was released from the joint last week, it was said that he would be keeping a low profile in an effort to quietly rebuild his life. A sound strategy, but one that apparently didn’t include his Twitter page, which is drawing attention for all the wrong reasons.

The Denver Post has been keeping a close (and highly critical) eye on Smith’s Tweets, and the local paper sees a disturbing trend for the talented Nuggets guard:

Nuggets guard J.R. Smith’s tweets are raising questions among fans. Several recent posts by Smith on his page — twitter.com/jr_smith1 — are written in a way that is commonly associated with the Bloods street gang. Words that would have a “C” in them are replaced with “K,” or if a word has both in them, the “C” is removed altogether. Smith has nearly 15,000 followers on his Twitter page.

“Those are still little messages that are being transcended back to some of the neighborhoods,” said Rev. Leon Kelly, executive director of Open Door Youth Gang Alternatives in Denver. “Not to say in no way is he promoting a gang. But people got to understand that a lot of these kids come from gang neighborhoods. Their friends are still involved in doing what they do. Just because one was able to get out of that lifestyle, many of them don’t forget where they come from.”

If he’s such a big Blood, why would J.R. Smith allow himself to wear a powder blue uniform to work everyday? Wouldn’t that pretty much go against everything that gang stands for?

In all seriousness, though, this is a pretty wild accusation to make based on a few messages from a player’s Twitter page. And some of these guys wonder why the newspaper industry is dying.