Is Memphis Looking to Get into the Zach Randolph Business? 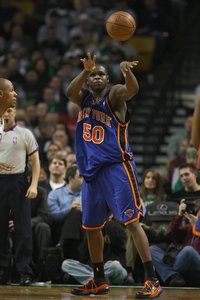 For reasons no one can quite figure out yet, Zach Randolph appears to be a pretty popular guy among GM types around the League days.

Recently, there was a rumor that Cleveland was interested in the salary-cap destroying southpaw, and now Memphis is reportedly interested, too.

From The Memphis Edge:

While the Griz were courting Smith they also had trade discussions regarding New York Knicks power forward Zach Randolph. Those discussions — mostly internal – are still ongoing as Randolph has been made available.

The Griz are willing to part with Darko Milicic (last year’s big free agent signing) in a package that wouldn’t require a core player (OJ Mayo, Rudy Gay, Mike Conley, etc). What the brain trust seems to be debating is whether Randolph fits the Grizzlies’ style on and off the court.

Memphis has one of the most promising young squads in the L. It also has one of the thinner frontcourts in an increasingly brutal Western Conference. They could certainly use a big body.

If this is the guy they’re counting on to solve their problems in the paint, then it’s probably safe to say that they’re in big trouble.

(Via: The Knicks Fix)