Is Scary Amare Officially Back? 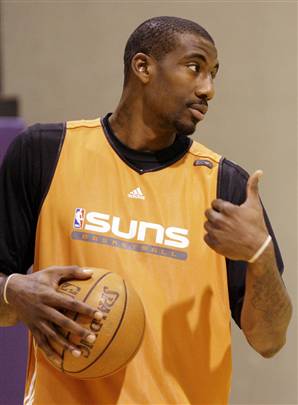 Surely you recall the terrifying performance put on by Amare Stoudemire during the Western Conference Finals against San Antonio in 2005. You know, the one where despite his team losing the series in five games, STAT announced himself to the world as an unstoppable force of nature, averaging an absurd 37 per game (and making Tim Duncan look silly in the process). Yeah, that guy!

Sure, the guy played well last season, but he wasn’t the whirling, tomahawking, nightmare we had gleefully welcomed into our lives a couple of years ago. Due to nagging knee problems, Stoudemire had transformed himself into a “smarter” ballplayer, relying more and more on his jumper and post game. If you’re inclined to believe what people in the Phoenix camp are saying, Stoudemire looks to be back to his frighteningly dominant self, and the rest of the League should be quite scared. From the East Valley Tribune:

“You forget how dominant he can be,” said D’Antoni, fighting a losing battle to keep the excitement of what he’s seeing under wraps. “He’s getting that quickness and that explosion back, things that maybe weren’t 100 percent there even last year.

“Everything is back in view again … that’s why he’s even more impressive.”

“It’s exciting to be back on the floor feeling this way again. It’s been two years, but it seems even longer,” Stoudemire said. “Last year, there were times I got in foul trouble because I tried to do too much — things I wasn’t capable of yet and it wasn’t smart…So the goal is to raise the bar, physically and mentally, and bring out all the capabilities.”

As a Laker fan accustomed to watching his team get its heart ripped out by Phoenix on an annual basis, it’s impossible for me to feel too happy about this; as a fan of the game, however, this is fantastic news.

If you get the chance, you owe it to yourself to catch that Spurs-Suns series on Classic sometime; no NBA player in recent memory (not LeBron, Kobe, or Wade) has been as jaw-droppingly exciting as Amare was during that amazing five game stretch. If he can return to anything resembling the player he was then, it’ll be cause for celebration.