Is There Such A Thing As Fan Misconduct? 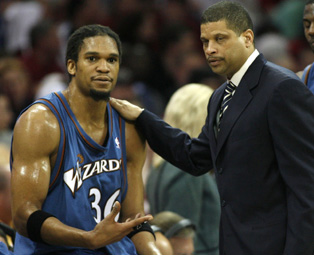 How is it possible that what occurred at the end of Game Four of the Spurs/Jazz series did not become a serious a topic of discussion? It was briefly mentioned that the fans in Utah were upset with the disparity of foul calls, upset about flopping, threw some things on the court, then was dismissed as being part of the game. Almost to be expected.

It’s one thing to take pride in cheering your team on, but sometimes fans can take this whole sixth man thing way too far.

What exactly would it have taken for this to be viewed as a serious issue? If one of the San Antonio players responded with a punch after being hit with an unidentified flying object, then would we have seen much different coverage? Would the entire media then have been focused on ostracizing the player who reacted incorrectly and demonizing the entire current culture of NBA players as violent thugs? Would we have been inundated with various discussions on how terrible hip-hop culture is and the horrendous influence it has on young, NBA players? Would they have then imposed a more strict dress code to further improve the image of the NBA? Would we then hear suggested options such as maybe moving the seats back to protect the fans, or putting the bench in a protected box or Plexiglas shelter similar to the ones utilized in some countries overseas? If one of the players, after being struck with an object, picked that object up and threw it back, then would it be an issue? What if one of the objects cut a player’s eye, head, or seriously injured said player in any type of fashion? Then would it have been viewed as something that has no place in basketball?

I pose these questions to gain some clarity as to why, in fact, nobody viewed this as a problem.

According to an article in the Deseret News…

At the end of the game, the amount of debris being thrown was so bad, when ESPN sideline reporter Michelle Tafoya tried interviewing Spurs forward Tim Duncan, Coach Gregg Popovich grabbed all of his players and quickly ushered them into the locker room.”

The article goes on to say…

“In all, after several eyewitness accounts from media members, Energy Solutions Arena security guards and ushers, here’s a list of some of the items that were tossed: empty water bottles, coins, wrappers, Carmex, towels and soft mini basketballs.

Two fans were taken away in handcuffs after an incident near the portal where the refs left the arena. One of those men was eventually cited for throwing a water bottle, according Salt Lake City lieutenant Steve Cheever, who added it’s not that uncommon for that to happen.”

After the Detroit/Pacers melee, David Stern issued some of the harshest punishments on record. He made the point clear that this type of behavior was not going to be tolerated in the NBA. He issued the statement: “We have to make the point that there are boundaries in our games. One of our boundaries, that have always been immutable, is the boundary that separate the fans from the court.”

Does that only become applicable when a player reacts to a fan, but not the other way around?

We are expected to maintain control no matter what is done, said, or thrown at us. No matter what type of abuse, verbal, physical or otherwise, we are expected to remain professional. We have to be the ones who rise above tolerated ignorance and endure various forms of maltreatment? The fact of the matter is, we are professionals and don’t have to endure an ounce of the abuse that our predecessors had to, but we are in 2007, not the 1960s. This is not something that should happen in today’s arena of sports.

My question is, why are the fans given somewhat of a free pass to conduct themselves in any inappropriate manner? Because they purchased a ticket? Why aren’t the fans required to handle themselves in a manner that promotes the healthiest environment possible? Players should not need protection from the fans.

Usually the fans are great. Cheering their teams with great passion and energy is something that players welcome with open arms. Players feed off the energy from their fans. Hearing the roar of the crowd, the cheering, the passion, that’s what makes the entire atmosphere of the arena special. Playing in a hostile environment on the road is a challenge that makes the game what it is. That makes the fans feel like part of the game. But when that line is crossed, the necessary steps have to be taken to ensure the safety of everyone involved.

David Stern also said after the Detroit/Pacers melee, “We have to do everything possible to redefine the covenant between players and fans, and between fans and fans, and make sure we can play our games in very welcoming and peaceful settings.” He added, “The NBA also has to redefine the bounds of acceptable conduct for fans attending our games and resolve to permanently exclude those who overstep those bounds.”

I am hoping it doesn’t take an ugly incident of retaliation by a player for this to still be viewed as an overall priority for our League.