Is this series over already? 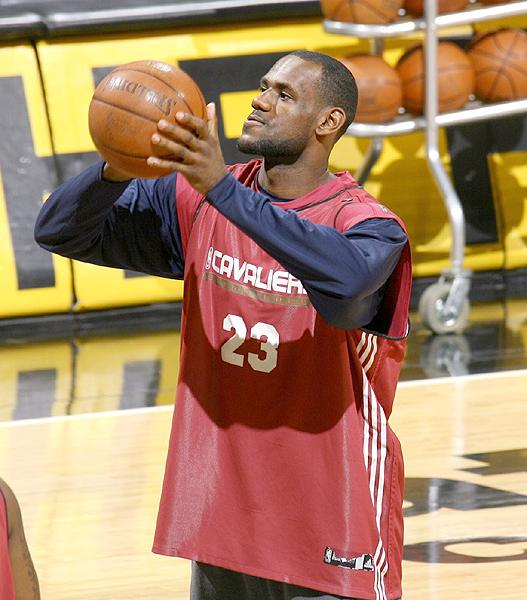 For each of the last two day’s practice sessions/media availability, I spent most of the Spurs’ time rapping with Jackie Butler (some of which Lang recapped in his Friday notes) and a few of the series’ other bench warmers (a breed who I will discuss at longer length in my column on Tuesday), and then headed into LeBron’s press conference.

A psychologist I am not, but I decided to look and listen for clues from the Cavs’ only hope. As you may have seen in a few clips on the news, LeBron’s expressions were, for the most part, flat and determined.

From the now-obligatory Scott Soshnick questions about whether LeBron plans to be the “next Muhammed Ali or Michael Jordan” (LeBron’s answer: “I want to be LeBron James.”) to the myriad questions about what he will do differently in game two (“be aggressive”), James maintained a focused tone. The only time he really let up was in response to a question about The Sopranos, which he said was “awesome because I told you I’m pretty tired of answering the same questions.”

Here’s the thing, though. As boring as the questions may be, I think they might help a player in LeBron’s position, and I think the Piston series is proof. When he passed up the game one shot to give the ball to Donyell Marshall, LeBron had no chance to forget about it because the media was all over him about it. The tone of nearly every question for two days after that, and even after the Game 2 loss to Detroit, was something to the effect of: “LeBron, don’t you need to take over for your team to win?” And eventually, that is exactly what happened.

While acknowledging that the Spurs are superior to the Pistons and there may be nothing the Cavs can do, at this early stage I’m willing to still look for mental angles. In this series, the mental challenge for LeBron and the Spurs is to not have the “we’re happy to be here” attitude. Which, to be honest, would make some sense. LeBron brought this team to the Finals at least a season before most people imagined, and if he wants to rest on that accomplishment, I think you could call that human nature.

So this is where the media pack—and LeBron’s attitude towards us—comes into play. Maybe, just maybe, were Game 1 to have ended and LeBron be allowed to do nothing but watch movies, chill with his teammates and talk to his expecting girlfriend, the game would disappear from his mind. Instead, these media sessions turn into a sort of challenge, the questions basically being presented as: LeBron, tell us how much you care that your team stunk the other night, and what are you going to do about it?

And, like I said, LeBron’s answers illustrate that he takes it to heart. Some sound bites, all delivered firmly, and with some serious confidence:

“I watched the film twice, including as soon as I got back to my room after the game.”

“I’ve done a great job of preparing myself from one game to another, and I definitely feel like game 2 is going to be a bounce-back game for me.”

“I wouldn’t say the Spurs did things differently than other teams have done against me; they just did it so well.”

“They’re very good at shrinking the floor and closing out on some of my shooters.” Note the “my.” Hey, he knows what time it is.

“If I’m not sharp then it’s going to be very tough to win ball games,” he added.

This was probably my favorite: “The first game of a series, I try to feel my way through. It’s not like I plan to come out and not score, but it has happened before and I do a great job of adjusting.”

Look, if the Spurs win another game in the 70’s and 80’s and Bron hits less than six field goals, I will shut up. But it was only one game. And this guy is starting to develop a little track record of improvement. My personal prediction for tonight is another Spur win, but in a more exciting game that at least gives people some reason to think the Cavs can get a W over their own in game 3. For tonight, let’s go with 99-95, Spurs, with 32 points for the confident and determined Mr. James (with a minor assist to the media for keeping him that way).