Is Tim Donaghy’s Life in Danger? 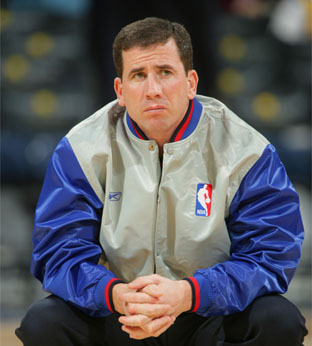 I had a much better weekend than Tim Donaghy. While I spent a couple of days visiting my folks and kicking back, Donaghy sat and watched his life completely unravel. Not only is he being investigated by the feds, but he’s now receiving death threats and his family wants him in the witness-protection program.

“Our concern is for his safety and his family’s safety,” said Sheriff’s Lt. Robert Mealy. “We are definitely going to share any information we get with the FBI.”

“They think he will be killed if he goes to prison, or even if he doesn’t, just because he’s probably talking, cooperating, and that’s ratting on the mob,” the pal said. “I don’t think [the Mafia] would take that very well.

“[Relatives] are very concerned for his safety,” the friend added. “I think they knew something serious was going on, but not like this, not this big, whole life-or-death issue with the Mafia. I mean, it’s the Gambinos.”

Perhaps the most interesting part of the article, is the claim by one of the Post’s sources that Donaghy will be naming other supposedly crooked individuals affiliated with the NBA. Clearly, this will not end well.

-Did Donaghy and crew fix Game 3 of the epic Suns/Spurs series? This YouTuber seems to think so.

-Everyone seems to be in agreement on one thing: Tim Donaghy was a pretty terrible human being, off the basketball court even.

In June 2002, he was charged with disorderly conduct and harassment for nearly running a U.S. postal carrier off the road after the mailman accidentally knocked over a bin of recyclables in front of the ref’s Pennsylvania home.

“He was pretty nasty,” mail carrier Charles Brogan, 48, said as he recalled trying to make a delivery at Donaghy’s West Goshen house. “I just drove down the road. I thought, ‘No way I’m going back there.'”

As Brogan attempted to drive his route, a screaming Donaghy chased him by hopping into his car and speeding after the postal truck, Brogan said.

-Mark Cuban, perhaps surprisingly, did not use the scandal as an opportunity to once again rail against the League and its officiating.

-According to this article, the NBA had a private investigator digging into Donaghy’s gambling habit more than a year ago but let him keep his job.