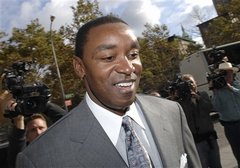 Say what you will about the trial’s devastating ramifications on the New York Knicks franchise, or on Isiah Thomas’s reputation (which was already in rough shape to begin with), but one thing you cannot say is that Isiah came out a loser in all of this. If anything, the guy did pretty well for himself, or at least managed to break even in a very ugly situation.

For one, the guilty verdict won’t cost him a dime (not counting legal fees). Secondly, the NBA doesn’t seem very interested in getting involved. And even more importantly, the Knicks will continue to gainfully employ Isiah Thomas.

Upon arriving in Charleston yesterday afternoon, Thomas said he’s not worried about job security, though Dolan will not make his annual trip to their training camp home of 16 years. An NBA source said the league will lay off, too, as it does not dabble in civil lawsuits.

“I’m excited to be back, be back in the gym and work with the guys and get ready for a good season,” Thomas said in a meeting with the beat writers. “It’s about winning now. It’s about getting back on the floor and coaching the guys, getting our team ready to go out and compete and win a lot of games.”

The League not moving a finger in this mess will certainly raise a few eyebrows, but that’s for the legally-minded to squabble over.

Sure, Isiah may never get another NBA job again, but for the time being, the man who confidently strode out of the courtroom yesterday and defiantly announced his innocence to the world, doesn’t really care.