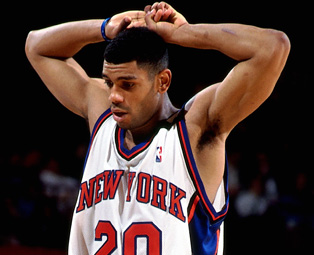 You have to love the irony of this signing. Last year’s Knicks were mostly comprised of healthy, but constantly out of shape underachievers.

Now, a 37-year-old Allan Houston is making a come back despite having serious knee injuries in the past.

From the official NBA press release:

The release also confirms Houston will wear No. 14 in honor of his father, Wade, one of the first African-American basketball players at the University of Louisville. Houston allegedly signed for the league minimum $1.26 million.

While we likely won’t often see Houston running the wing on a fast break, he can probably still shoot treys for 15-20 minutes per game. How well his already weak knees hold up in D’Antoni’s system will determine long he’ll stay on the court this season.

Regardless of what happens, Houston is a competitor and a good teammate. You have to respect Allan’s love for the game.