The Class of The Glass 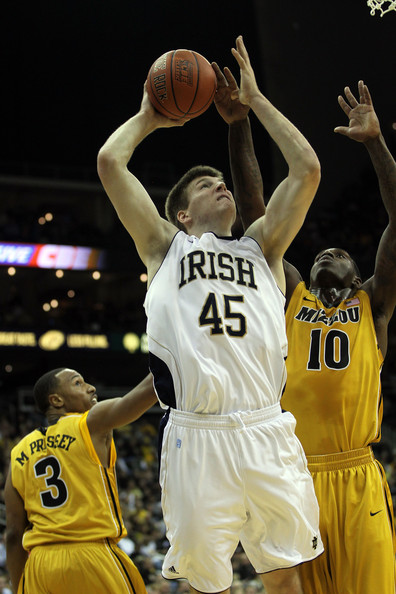 It was winter of 2008. Notre Dame head coach Mike Brey settled into his seat in the gymnasium at Glenbrook South High School in Glenview, IL. With an assistant by his side, the longtime Irish head coach was instantly enamored by GBS’ stocky, 6-8 senior forward who was gobbling up every rebound in sight. The senior, a young Jack Cooley, showed off his impressive stroke too, knocking down 13 of his 14 free-throw attempts.

Brey didn’t need to see anymore. He told his assistant to go over to the snack bar at halftime and tell the man behind the counter that his son was officially being offered a scholarship to play college basketball in South Bend. With Cooley’s instincts to play physical in the post, the Big East seemed like a perfect fit.

He also had a year to learn from watching and practicing against Luke Harangody.

“It was great to see his hustle and his intensity, it was really valuable to watch such a great player play, even though we are somewhat different players,” said Cooley, now a 6-9, 244-pound 2013 NBA Draft prospect. “Guarding him in practice every day helped quite a bit because of how quick he was and just the offensive repertoire that he has. He taught me a lot of hints for how to handle pressure in terms of games and stuff like that. It was just good to watch him as a top Big East player and see how it works.”

Brey enjoyed watching the two big men—who could pass as twins—battle in practice, but eventually needed to end what had started as a learning experience.

“Quite frankly, by the end of the season, I tried to keep Jack away from Luke because he would have to deal with guys in the Big East two to three games a week,” Brey said with a laugh. “So, I didn’t want him to have to deal with Cooley in practice because he’s so strong and so physical. Jack was just being a young guy and trying to get better. He would beat up on Luke. I would tell the assistants, Don’t let Jack guard Luke today.”

But, Cooley was overpowered by Harangody’s shadow outside of the Irish’s practice facility. The youngster from the Chicago suburbs only played 5.3 minutes per game during his freshman season in ’09-10.

His minutes barely rose to 10.3 minutes per game in his sophomore season, as Brey and his staff grew worried that Cooley would never be in good enough condition to play 20 minutes per game, despite his ability to rebound and fight in the paint. Brey remembers wondering if Cooley was going to make it out of the team’s conditioning drills without collapsing and puking. But, something changed between his sophomore and junior season.

“He was more interested in video games than basketball earlier in his career,” Brey said. “He liked the game, but he didn’t love the game. Where I saw the big jump was when he knew we would have to rely on him to be a starter. The game became important to him every day.”

“I think more opportunity was really the reason. When it came to my junior year, I was getting a lot more minutes and my role changed a little bit,” Cooley said of his changed mindset. “I just stepped into the role my team needed me to in order to win, and I was able to take advantage of that opportunity I was given.”

Brey says that a strict diet and hard work on conditioning helped Cooley get in shape for his opportunity in his junior year, ’11-12. After playing just over 10 minutes per game the previous season, Cooley’s minutes jumped to 28.7 per night as he started 32 of Notre Dame’s 34 games. With more playing time, Cooley was also able to score 12.5 points, grab 8.9 rebounds and block 1.6 shots per game.

The rest of the conference took notice, and Cooley was named the Big East’s Most Improved Player and selected to the Second-Team All-Big East after leading the Irish to a 7-seed in the NCAA Tournament.

“It felt really good to know that it was recognized throughout the league how much I had accomplished from the year before ’til the end of that year,” Cooley remembers. “I always play for my team to win, but to get that personal recognition really felt great.”

His collegiate success continued during his senior campaign in ’12-13, putting up nightly averages of 13.1 points, 10.1 rebounds and 1.2 blocks, compiling 20 double-doubles on the season. His season was deemed worthy of the First-Team All-Big East and granted him an invitation to the annual Portsmouth Invitational Tournament, an event that features 64 college basketball seniors playing for four days in front of NBA scouts.

At the PIT, Cooley averaged 13 points and 14 rebounds per game en route to a spot on the All-Tournament team. Scouts took notice.

“It was another opportunity to go out there and play against pretty good competition. Any chance I get to play I get really excited for,” Cooley said. “I just went out there and rebounded the ball pretty well. I tried to show teams that I can play at any level and be successful. I think Portsmouth helped show that off a little bit.”

But, many know Cooley can rebound. Some scouts have even referred to him as the best rebounder in this Draft class. Now that he’s worked his way onto the NBA’s radar, he needs to show he can also shoot in order to get drafted by a team in the second round.

At Notre Dame, he took 25 jumpers in his senior season. He drilled 11 of those attempts, but that’s a very small sample size. So far, in workouts with two NBA teams, he shot 68 percent from from the NBA three in the first and 48 percent in the second.

“I’ve been working on my shot every single day in the gym, since the season ended, and putting up hundreds of shots,” Cooley said. I’ve been extending my range out a bit. I wasn’t really able to show during college that I can extend my range out. But, now, I’ve been able to work on my game so it’s become more apparent that I can shoot from long range without much of a difficulty. I can make pick-and-pops, or 17- to 18-footers or the occasional three. I’ve gotten a lot better shooting those longer shots.”

His foot speed is also something Cooley thinks he needs to improve on to be effective at the next level. He feels faster feet will help him hedge better on screens and rotate quicker defensively. Along with putting up hundreds of jumpers, Cooley says he’s rigorously jumping rope and going through other speed drills.

“It’s extremely labor-intensive. I’m literally working on it every single day,” Cooley said. “I’m making my workouts a lot harder by doing it but I know it’ll be better for my game in the long run. I’m jumping rope, doing agility ladders, doing lateral slides with bands around my ankles and just a whole bunch of things. I’m getting quicker, better, faster, stronger and I’m going to be ready.”

What Cooley will be ready to do best is bring an intense and blue-collar spirit into an NBA practice. He’s the kind of player who craves the opportunity to battle with another big down low. He’s got the ballsy courage to propose to his girlfriend on stage at Notre Dame’s basketball banquet. He’s a guy Mike Brey wishes was still on campus.

“We’ll really miss him,” Brey said. “There was an energy and an enthusiasm about him that was infections within our team and our home crowd.”

As of now, Cooley is fighting to make as good of an impression he can to be picked on June 27. Perhaps, after hanging up with a GM, he can tell his father the good news about the next step in his basketball career.