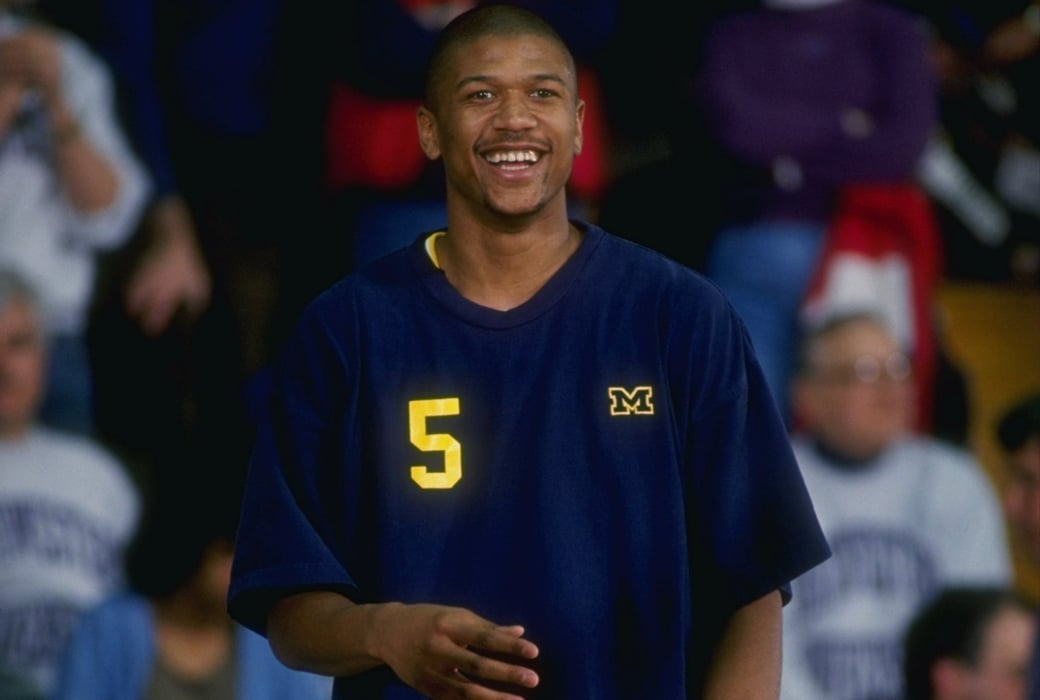 In 1973, there were less than five boys born with a variation of the name “Jalen.” One of those kids was Jalen Rose. That number wasn’t much higher when, in 1991, Rose enrolled at the University of Michigan. By 1999, however, the same season Rose made an NBA Finals appearance, that number had skyrocketed to 7,400 names.

Forget that he was a McDonald’s All-American, made two NCAA Finals at Michigan, won Most Improved Player in the NBA and averaged a career high 22.1 points per game at 30 years old. Yes, Jalen Rose could hoop, but to just list his basketball accomplishments wouldn’t do him justice. People wanted to be like Jalen Rose. They wanted to name their kids after him.

While at Michigan, Rose and four other freshman superstars, the “Fab Five,” redefined mainstream basketball. They wore baggy shorts and black socks. They shaved their heads. They talked trash. They bumped Ice Cube in the locker room. As Michigan assistant coach Perry Watson said in an ESPN 30 for 30 documentary about the team: “It was like going on the road with the Jacksons.” Even Muhammad Ali wanted to meet them. For their two years together, the Fab Five were the hottest basketball commodity in the country.

“When I watch sporting events today, I realize that athletes have become living billboards,” Rose said, via Yankees Magazine. “That really started with us. When we took the court wearing black socks and baggy shorts, business people became aware that the apparel athletes wear is marketable.”

Rose was fearless on the court—a crafty lefty with sneaky hops and a killer mentality. After averaging 17.5 points per game during his three-year career at Michigan, Rose entered the NBA draft, going 13th to the Denver Nuggets. He brought the same demeanor to the NBA, but it took a few years for his game to catch up. In his first five years in the League, he never averaged more than 12 points per game and never started regularly.

But in classic Jalen Rose fashion, he silenced his critics right when they thought he couldn’t turn it around. In the 1999-00 season, Rose averaged 18 points, 4 assists and 5 rebounds, and shot 47% from the field and 39% from three. At 6-8, he was the perfect point-forward to pair with Hall of Famer Reggie Miller. Rose started every game for the Pacers, bringing home the League’s Most Improved Player award.

It’s no surprise that Rose’s best season to that point translated to an NBA Finals appearance. He and Miller were ruthless competitors. And Rose especially was the definition of a gamer. When the lights shined brightest—whether on the court or off—he was unafraid to step up. That was especially true in the NBA Finals, when Rose averaged 23 points per game. But he still couldn’t capture the championship that had eluded him at Michigan. Shaquille O’Neal, Kobe Bryant, and the Los Angeles Lakers defeated the Pacers in six games.

He only spent one and a half more years with Indiana, but the 1999-00 season re-energized his career. For the next three seasons, Rose averaged 20 or more points and finished out his career as a strong role player in Chicago, Toronto, New York, and Phoenix.

After his tenure in the NBA, Rose opened up his own school. Before LeBron James’ I Promise School, there was the Jalen Rose Leadership Academy. Located in Rose’s old Detroit neighborhood and opened in 2011, the school aimed to provide a stable, well-funded and tuition-free opportunity for inner city students.

“I started to get inspired around the time of the country’s economic downturn and I realized that my state was closing schools and opening prisons,” Rose said in an interview with HoopsHype. “I realized that this was my opportunity to do more and make a substantial impact in the neighborhood that I grew up in.”

From opening up his own school to rocking the black socks and baggy shorts, Jalen Rose is one of basketball’s (and sport’s) OG trendsetters.