Jamal Crawford out for the year. Huh? 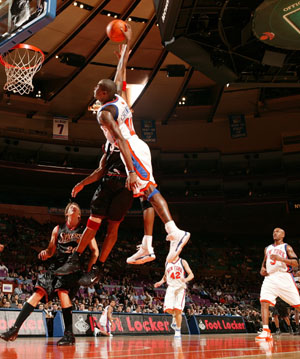 This is a quick hitter post. Jamal Crawford might be out for the year. In light of yesterday’s Steve Francis discussion, this is very frustrating. The Knicks have gone from having 15 shoot-first point guards to having Stephon the oldest 30 year old on the planet (they say he can’t play back to backs on his turf toe!) and QRich is now the shooting guard. Is Nate Robinson going to get real minutes for a team that is in the playoff hunt? This Crawford injury is really upsetting, but if you have been a fan of the New York Knicks in the 2000’s, not surprising at all. Last night Eddy Curry proved he is better than Shaq at 10% of what it means to be Shaq. The Knicks are poised to make their run. And then this. Sucks.
It doesn’t hurt nearly as badly as Shaun Livingston’s knee, but it still hurts.