James Harden Believes a ‘Dynasty’ is Being Built in OKC 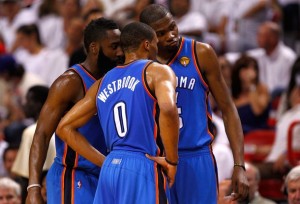 The pain of losing the NBA Finals to the Miami Heat remains raw for the OKC Thunder’s young stars, but they’re already looking forward to what the future holds for them.

And according to James Harden, who struggled mightily in the championship round, the Thunder can expect to be the ones hoisting up championship trophies going forward.

Harden says he wants to sign a long-term deal in OKC — and might take a bit less money to make that happen — in order to help the franchise dominate the NBA for years to come.

Serge Ibaka and Eric Maynor join Harden as Thunder players who will be eligible to begin negotiating extensions to their rookie contracts starting July 1. But with Kevin Durant and Russell Westbrook already signed to max contracts, it’s anyone’s guess how the Thunder will be able to afford all five players. “I’m just leaving it up to my agent and Sam (Presti),” Harden said. “They’ll do a pretty good job of working it out. I’m focused on several other things right now. But when the time is (right), they’ll figure it out and it’ll be done.” Harden is widely considered to be a top five shooting guard and potentially a third maximum-allowable contract level player. But he said Saturday that team success is more important to him than money and potentially making more elsewhere.

“This is something special here,” Harden said. “A dynasty is being built here. So we’re winning we’re having fun and we’re brothers. The other stuff, you can’t buy it.” Harden said his close friendships with his teammates is an extremely important factor in his decision as well. “This team is like a family,” Harden said. “Like, we’re really brothers. We hang out most of the time every single day. You won’t find any other team like this. I love it here.”

James Harden isn’t alone in his stated willingness to forego dollars in order to remain in OKC. Eric Maynor also stressed the importance of sacrificing a little for the current team to remain intact.

Talk of a dynasty may be wildly premature, but one thing is certain: should the OKC Thunder somehow find a way to keep this group together, they will be serious NBA championship contenders for years to come.