Jan Vesely: ‘I will enter the NBA Draft’ 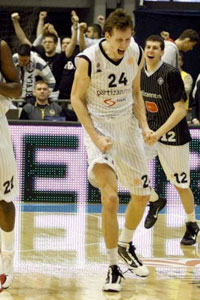 “ready for the NBA after this season.”

While Partizan is struggling a bit this season and Jan’s numbers have dropped a tad from last season, he’s shown some major advancements in his game. Through the film that we checked out on Synergy Sports Technology, he appears even more athletic and more polished as a shooter than last season. Vesely is spending time between the small and power forward spots for Partizan, though he says that he envisions himself as a “power forward” in the NBA. Donned “the European Blake Griffin” by many, he’s had no problem putting guys on posters and has more bounce than any true European in recent memory.

We will have plenty more on Jan in SLAM 146, so be sure to go out and cop it once it hits news stands!

SLAM: You would have surely been a lottery pick if you entered the 2010 NBA Draft. What made you decide to spend another year in Partizan?

Jan Vesely: I felt that I should wait another year. In Partizan, the coach believes in me. I have great confidence and trust that I will be more psychologically ready for the transition to the NBA after this season.

SLAM: What is your contract situation like? Is there any buyout?

JV: I’m under contract with Partizan until 2013. It all depends on the arrangement between Partizan with a new club from the NBA or from Europe.

SLAM: I have seen you quite a bit on Synergy, but most American fans have not. Though you’re European, you have a style reminiscent of an American power forward. Can you describe your game for those who haven’t seen you play?

JV: I am very dynamic and athletic player. They say that I’m one of the best athletes in Europe. I excel in activities such as blocks, primarily gains and dunk. I Intensive work on shooting from long distance and gaming activities based on one on one action.

SLAM: You surprise a lot of people with your athleticism, to the point that many are calling you the European Blake Griffin. Is that something that you’ve worked on or something that just came to you naturally?

JV: In my condition, I have had to work a lot, but much of it I have received from God.

SLAM: Is there any player (either European or NBA) that you patterned your game after?

JV: My idol for a long time has been LeBron James.

SLAM: What position do you see yourself in the NBA: small forward or power forward?

SLAM: Who is the toughest player that you’ve ever played against?

SLAM: Will you come over to the NBA immediately after you are drafted? Or do you plan to stay with Partizan for a few years and continue to develop?

JV: I’m ready to go to the NBA after this season.

SLAM: What area of your game are you looking to improve upon most?

JV: As I said, I’m working intensively on my shooting and one-on-one game.

SLAM: What are your goals both for yourself, and for Partizan this season?

JV: My personal goal is to become the leader of my team. I would be happy with Partizan advancing to the Euroleague playoffs as well.

SLAM: How much did the loss of Aleks Maric hurt Partizan?

JV: Aleks was very important for us, both as a player and a person. If he stayed in Partizan, he would have paired with Nathan Jawai best big man duo in Europe.

SLAM: Will you enter the 2011 NBA Draft? If so, where will you have to be projected to stay in the draft?

JV: I will enter the NBA Draft in 2011 and I believe that I will be picked amongst the top 5 players.

SLAM: Talk a little bit about your season with Partizan. You normally destroy the competition in the Adriatic League, but this season your team is struggling even though you have a very talented team. Why do you think this is?

JV: Each season for our team was very stacked. With the new season, we started with many new players. It takes us some time to play together, but recent games show that we have to do better.

SLAM: Do you plan on playing with the Czech National Team this summer?

JV: Representing my country is a great honor for me. How things will work out in the summer, I don’t know. Everything depends on the NBA Draft.

SLAM: If you had to compare yourself to any NBA player, who would it be?

JV: It is hard for me to compare myself to any player who has been in the NBA. Maybe I could say Dirk Nowitzki of Dallas. I like his style of play a lot.

SLAM: What are your thoughts of the situations with Ricky Rubio and Fran Vasquez not coming to the NBA? Is that something that NBA teams need to worry about with you?

JV: Ricky and Fran have their own personal reasons why they have not yet entered the NBA. I am very much looking forward to playing in the NBA, because the fans who love basketball as well as fans in Belgrade. I hope they will love me too.