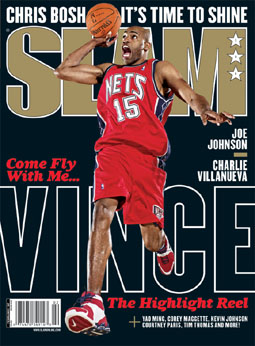 Luke Walton re-signed by the Lakers. I’m sure that will solve all of their problems.

Jason Kapono signs with Toronto. For all of this Ray Allen/Z-Bo to the Atlantic talk, the division champs are the ones getting richer. Kapono was having a record-breaking type of year as a shooter through the All-Star break. He cooled off, got hurt, now he’s rich. Underrated self-involved SLAM jinx: three of the In Your Faces I wrote for the magazine this past season were Kapono, David Lee, and Mikki Moore. Two of them lost career years to injury and the third started a near fight in a playoff game that woke LeBron up from a nap.

And finally, the Clippers are thinking about adding Steve Francis to their team. Uh… feel free to make your own jokes. There simply are not enough hours in the day for me.