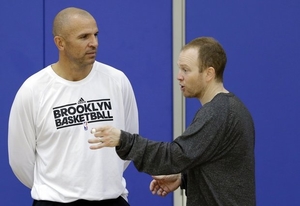 Brooklyn Nets head coach Jason Kidd held a surreal press conference on Tuesday night, during which he announced that Lawrence Frank (the NBA’s highest-paid assistant) would no longer be allowed to sit next to him during games or practices.

There’s obviously more to this bizarre story, but Kidd would only reveal that there was a “difference in philosophies” between the two men (Frank coached Kidd in New Jersey in a previous basketball life.)

“Lawrence has been reassigned to doing daily reports and he won’t be sitting on the bench or at practice,” Kidd said. “There’s the change. It doesn’t change the coaching staff. Guys will still be there sitting on the bench. That’s that.” […] A league source said Frank was assigning tasks to fellow assistants — traditionally a responsibility of the head coach — and it didn’t sit well with other members of Kidd’s staff. Another source said the relationship between the two had gotten to the point where Kidd felt he was being undermined by Frank with players and assistant coaches on the staff. Kidd said no one will replace Frank, and the remaining coaches — John Welch, Roy Rogers, Joe Prunty, Eric Hughes and Charles Klask — will remain in their current roles.

After Brooklyn Nets coach Jason Kidd blistered top assistant Lawrence Frank in a staff meeting on Nov. 4, the partnership was irreparably damaged and ultimately spiralled to its end on Tuesday, league sources said. Hours after a blowout loss to the Orlando Magic – Kidd’s first game on the bench following a two-game suspension to start the season – the entire coaching staff witnessed Kidd lose his temper with Frank and escalate a strangely uneasy and brief coaching partnership together. There had been conversations about moving forward together in recent weeks, league sources said, but the decision to let go of Frank was Kidd’s choice.

With money still coming in from his old head coaching gig in Detroit, and a six-year deal in Brooklyn, Lawrence Frank will now be paid more than $1 million annually to file a daily book report that Jason Kidd will never read.

The Nets moved to 5-13 on the season last night as they were blown out by the visiting Denver Nuggets 111-87, with Frank probably howling like a maniac from a dungeon underneath the Barclays Center.