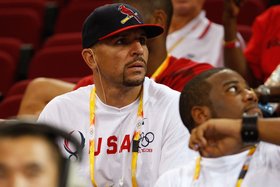 Jason Kidd thinks Pau Gasol, Jose Calderon and the rest of the guys on Spain’s national hoops team should have to do more than simply give a ridiculous explanation of their slanted-eye photo. Kidd knows that if Team USA had made such a bone-headed decision, there’d be hell to pay.

“We would’ve been already thrown out of the Olympics,” he told Yahoo! Sports. “At least, we wouldn’t have been able to come back to the U.S. …There would be suspensions.”

And for his European peers, well, Kidd suggested, “They won’t do anything to them. It’s a double standard.”

I don’t know about Kidd’s belief that he and his teammates would’ve been thrown out of the Olympics, but suspensions (or at the very least, some kind of slap on the wrist) from the League would have been handed down.

Feel free to step up at any time, Mr. Stern.