Back in 1999, the SLAM staff debated who should be the Rookie of the Year — Vince Carter (the eventual winner), Paul Pierce, or Jason Williams. Each player got a cover.

Below you’ll find the case for SLAM Legend of the Week J-Will, made by former editor Scoop Jackson.

I know what you’re saying: Why him? Why is he in this debate? Does he even matter? Is he really relevant? Don’t let others fool you, don’t fool yourself. In other words, don’t be a damn fool.

Obstacles. Those damn obstacles. Inexperience, illegal defenses, speed, color, Gary Payton, playing for the Kings. The one who is able to overcome the most obstacles, the most stereotypes, the one who is player-hated the most and the least likely to succeed—in this case, the intruder, wins.

Impact on all levels has value. Especially when the odds against you are stacked higher against you than against both your counterparts combined. Vince Carter and Paul Pierce are supposed to be here, battling for the R.O.T.Y. Not you. When the season started you were an afterthought, dismissed as a “maybe.” “Maybe…he can cut it. Maybe…he’ll make it.” That’s what they said. Now they are all frontin’, claiming they saw you coming all along. Saying they meant “Jason Williams” when they publicly said Dirk Nowitzki was going to be Rookie of the Year. 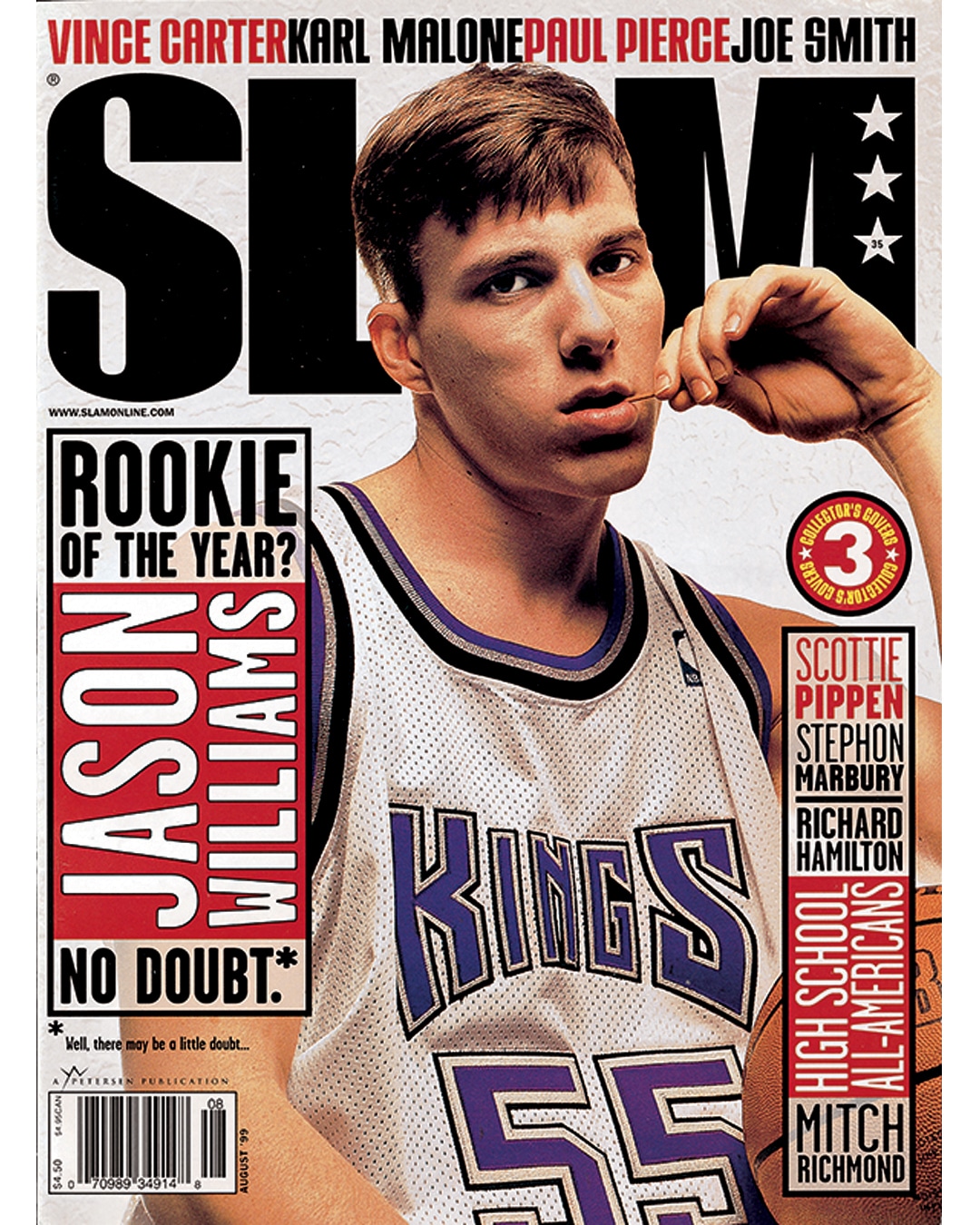 State the case: THE POINT GUARD POSITION IS THE MOST DIFFICULT POSITION IN BASKETBALL TO PLAY. PERIOD. Vince and Paul got it easy. As do Ben and Russ. See, carrying a team and running it are two different things entirely. You can carry a team forever, never win anything and still come out looking shined. Dominique Wilkins did it in ATL for years; Shareef Abdur-Rahim is doing the same thing in Vancouver. The weight of running a team is much heavier. If the right person isn’t running that team, nothing happens. So understand that Chris Webber may put Sac on his back every night, but the future of the franchise is in who’s running it.

Plus, right now the point guard position is the premiere spot in the NBA. There is no night off. Every night Jason Williams goes head up against seriousness: Stockton, Marbury, Payton, Iverson, Kidd, Hardaway—both of ’em. He’s the only rookie who can’t afford to make rookie mistakes. This is what makes Jason Williams more valuable than Carter or Pierce.

I know what you’re saying: Who’s selling you the crack you on? Whose hands are in your pocket, making you write this nonsense? No one. This is about giving credit where credit is due. And although my choice may not be the popular one, it will be the most valid, which doesn’t always stand for much these days. Maybe if he braided his hair you’d feel him.

It was once said that 1’s aren’t made, they’re born. Only God can deliver great point guards, not Rick Adelman. Jason Williams, because he was born into this, will re-redefine the position as we know it. Vince Carter and Paul Pierce won’t. They will do the phenomenal no doubt, but their games won’t be Ripley; JW’s game, on the other hand, will. Believe it or not.

70-foot, alley-oop passes to Tariq Abdul-Wahad; over-the-head dimes to CWebb; one-handed, in-the-lane, behind-the-back grooves that make us watch SportsCenter over and over again; ill Dr.J-like reverse layups that put NBA Showtime producers on edit; murderous crossovers that freeze defenders like Han Solo, wrapping opponents up like an Erykah Badu headpiece; 21-point/9 assist/ 4 steal games on a semi-regular basis; 11 assist/ 1 turnover game against the Lakers his first time on national TV. He be pissin’ on defenders like they fire, putting out the flame. Truth be told, if Eminem’s on the cover of Rolling Stone, why shouldn’t JW grace SLAM alone? 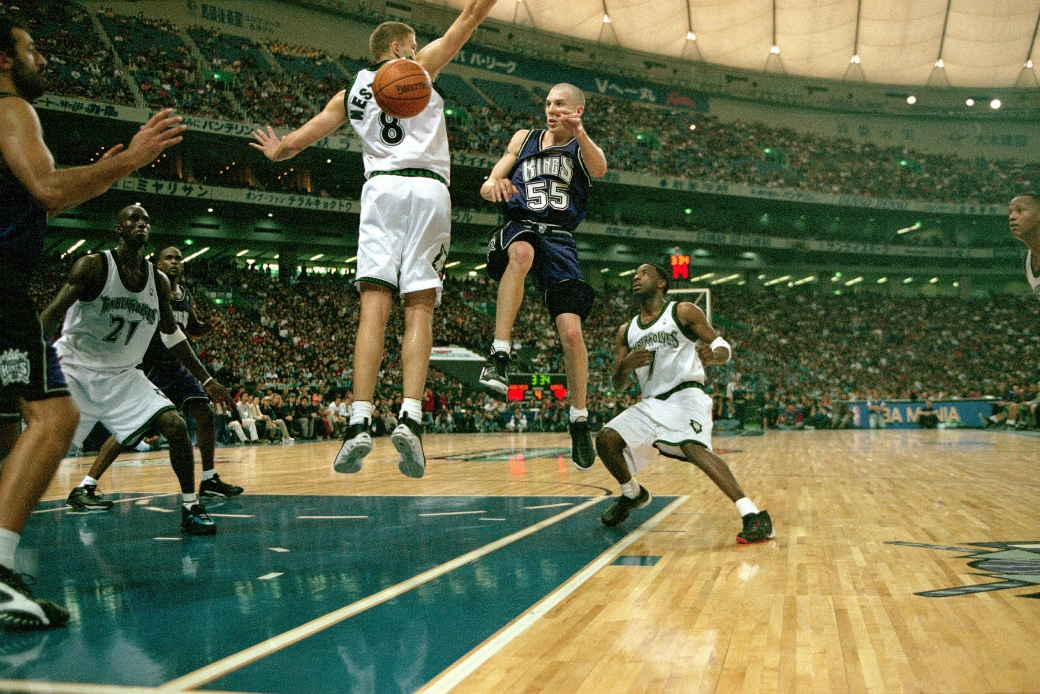 See, Jason Williams was not even supposed to be in this conversation. He wasn’t expected to do anything close to what he’s done. Bibby, Olowokandi, Carter, Pierce, Jamison, Larry Hughes—they entered the stage celebrated. What Pierce and Carter have done is nothing less than what they were supposed to do. Tournament-tested All-Americans need to wreck it. That’s expected. The League is built for them to shine. To hand either Carter or Pierce the award for most valuable freshman in the NBA is the safe move. Think about it. Now, without frontin’, ask yourself who really deserves the award?

I know what you’re saying: You think I forgot the rule—it ain’t where you from, it’s where you at. Believe, Jason Williams is at the point right now where he has other players in the League talking about him as one of the better point guards in the game, not just rookies. Mentioning his name ahead of the Terrell Brandons, Sam Cassells, Brevin Knights and Mark Jacksons. He has the ability to change the complexion of a game with his playmaking ability, his scoring or his three-point range. Now, imagine Jason Williams with the Rockets. Or the Lakers. Or the Spurs. You can see the trophy can’t you? Close your mouth. You’ve been busted.

That’s what Williams brings to the table. You can’t put any other rookie in the league on a team and instantly visualize a championship. You can’t do that with Paul Pierce or Vince Carter or anyone else. This is what separates WC from the mad circle of players vying for the crown. His impact is that significant. No other rookie can claim that.

Cats like JW only come around once or twice in a generation. He’s that special, that rare. Like a Black quarterback. There have been only a few who revolutionize: James Harris, Doug Williams, Warren Moon, Randall Cunningham. They become the spirit according to which all other African-American quarterbacks will be judged. Any player given comparisons (ie. Daunte Culpepper), has to be very special and rare one. The weight of that legacy must be upheld simply because the racism involved in sports doesn’t allow the opportunity to occur very often. Before Jason Williams, there were Bob Cousy and Paul Westphal. In between them was Pete Maravich, the one to whom Williams is most often compared. It’s been a long time since someone has reawakened the ghost of Pistol Pete. Made us see visions of basketball brilliance from ground level. For this alone, Jason Williams’ rookie campaign must be recognized for how special it really was, because something like it may not happen again for another generation.

I know the last thing you’re saying: Scoop, I thought you were a racist, thought you hated white people, especially ballplayers? The white boy got you selling-out with those tricks.those un-fundamental, sugar-coated, extra-pastry moves he does are not what basketball is about. Wrong. First, I’m a realist. The truth always supersedes race, that’s why I’m able to write this and look in the mirror next morning. And those tricks he does, they’re for adults—not kids. Those tricks are only for prodigies. Only for those who pull ’em out of their bags and bless the world with them. To say that tricks aren’t important is ignorant. Earl Monroe and Pete Maravich had tricks. Isiah Thomas and Bob Cousy had tricks. Top 50. All time. Allen Iverson got ’em too. But two years ago the NBA wasn’t really ready for his tricks. Too ghetto. Now Jason Williams comes along with his bag of tricks. Too trailer park? That’s what I thought. If White Chocolate doesn’t get the Rookie-of-the-Year Award, he’ll definitely get the coveted, Charles Barkley-issued “playground Rookie-of-the-Year” award. Which may be good enough. You see what that did for Iverson.