JaVale McGee has no desire to talk about Shaquille O’Neal. “I feel like it’s stupid to keep bringing somebody up that’s really not…I just don’t like bringing people into my story,” he says. It’s a Sunday evening in New York City and McGee is sitting in the visitor’s locker room at Madison Square Garden. His size 20 feet are submerged in a bucket of ice, while two ice packs rest on his knees.

McGee played just eight minutes this afternoon during the Warriors’ victory over the Knicks; it was his pre-game work that led to the need for such extensive physiological maintenance. He spent nearly an hour on the MSG court prior to tip-off, banging bodies with Golden State assistant coach Jarron Collins. The two worked on finger rolls (“I’m gonna cut this fucking thing off,” McGee exclaimed while looking at his left hand after missing a shot from a foot away), fadeaways, short jumpers and, this being the Warriors, even long treys.

It’s the type of work that’s helped turn McGee, once viewed as nothing more than a headcase, a meme, a waste of talent and physical gifts, into a valuable component of one of the League’s top teams. He might only be seeing the floor for about nine minutes a night, but even in limited time, McGee’s impact has been immense.

His 7-foot body and 7-6 wingspan make him a nightmare for opposing guards probing the paint. His pogo stick-like legs make him a threat to snatch alley-oops from almost any angle. Most teams try to space the floor horizontally; the Warriors, for three years now, have thrived by leveraging the shooting range of the Splash Brothers to also stretch defenses vertically (meaning up toward the half-court line). With McGee on the floor, Golden State can add to its never-before-seen spacing by making defenders worry about the area above the rim, too. McGee allows the Warriors to essentially transform the offensive side of the court into a cube. It’s no accident that they’ve been even more potent (scoring about 7.9 points more per 100 possessions, per NBA.com), with him on the floor.

“His size and athleticism gives us a different dimension,” Warriors forward David West says. “Dudes have to account for him, whether above the rim, or because of his ability to run the floor and finish at the basket.”

All that on-court success has helped McGee, for the first time since he was drafted 18th overall by the Wizards back in ’08, feel comfortable and secure off the court. Which brings us back to Shaq, and their feud, which is really just an avatar for McGee being fed up with the world viewing him as nothing more than an overpaid, dumb and lazy jock.

Shaq, of course, has played a role in this. Or rather his “Shaqtin’ a Fool” segment on TNT’s Inside The NBA has. McGee is a frequent “Shaqtin’” guest star. There was the time he attempted, and missed, a fastbreak dunk from the foul line in the waning seconds of a game against the Kings…with his team trailing by 15 points. And the one where McGee ran back on defense…after his team had corralled an offensive rebound. And the game where he fell into the lap of an elderly woman sitting courtside…and planted a kiss on her left cheek.

Also, he once forgot to remove his warmup pants before checking in.

So, yes, McGee’s occasional foolishness did prompt much of this ridicule. But years of being portrayed as a dope would eventually get to even the most Zen of souls, and so this year McGee—now 29 and coming off four seasons in which he played a total of 62 games, for three different teams, due to multiple stress fractures of his left tibia—began fighting back. He went after Shaq in local papers, then on Twitter, using a peanut emoji to not-so-politely request in not-so-nice language that Shaq cease talking. He punctuated his response with a phallic culinary suggestion.

Which is all to say that clearly the barbs from Shaq got to McGee. So why doesn’t he feel like delving more into the incident?

“My story,” he says, “is all positivity and good stuff.”

As for what exactly “his story,” is, well, McGee is thrilled that people are finally asking. 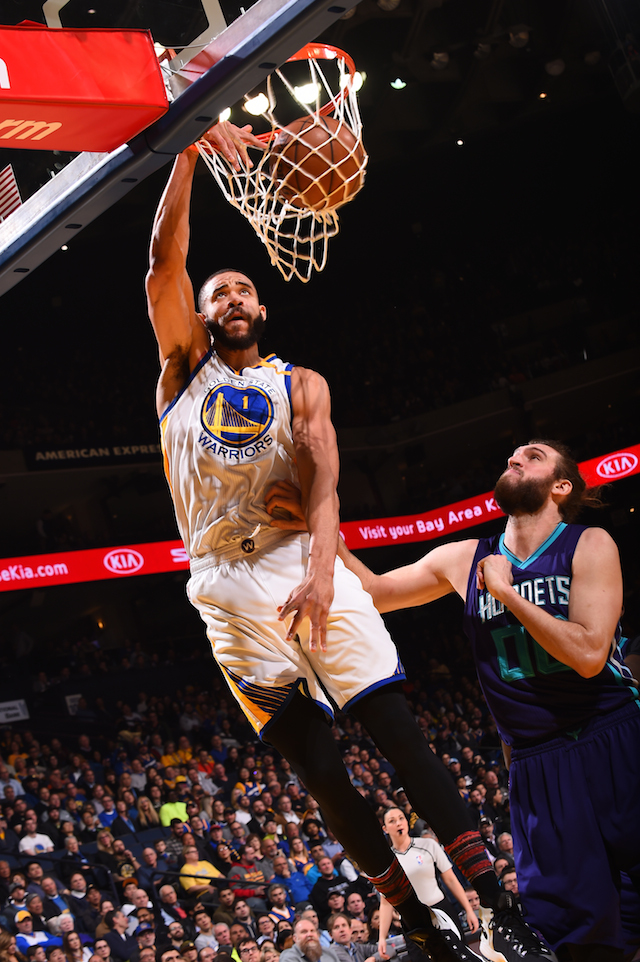 He was always reserved. Not quiet, at least not around friends and family, but like many 7-footers forced to deal with constant gawking and jokes growing up, McGee preferred to keep to himself.

“We’ve been tall our whole lives,” explains McGee’s younger sister, Imani Boyette, a 6-7 center for the WNBA’s Chicago Sky. “Our mom”—Pamela, a boisterous Hall of Fame women’s basketball player—“has a huge personality. People are always coming up to us asking how tall we are. It just makes you a bit shy.”

Naturally, given his height and genes (his father, George Montgomery, was a 6-9 center for Illinois), McGee turned to basketball. The hardwood, though, didn’t offer as many answers as he had hoped for. “I always enjoyed basketball, but I didn’t really like practicing, at least not until I got older,” McGee says.

He ran into other problems at gyms around his hometowns of Flint, Sacramento, Detroit and then Chicago. “When your mother is a Hall of Famer and you’re as tall as us, when you walk onto a court there are expectations,” Boyette says. “Even at a young age.”

Back then, the mere sight of a player with JaVale’s height coupled with his last name often turned him into a target during local pickup runs. Slowly, though, he grew into his body. He earned a basketball scholarship to the University of Nevada, where he left after just two years.

His physical gifts had betrayed him again.

“I think he developed a little late and learned the game a little later than most,” Mark Fox, who coached McGee at Nevada, says when asked about McGee’s repeated bloopers. “A lot of big guys are like that.”

The difference, says Fox, was that McGee’s ridiculous talent was propelling him up draft boards, making it impossible for him to stay in school to better hone his craft.

“It’s my fault for not preparing him better,” Fox adds. “It probably would have helped him a lot, if he was able to stay in college for longer, but he was so highly touted he had to leave for the NBA.”

Back at MSG, McGee is explaining what it is he loves about Disney’s Magic Kingdom, a place Boyette says he visits every year. “I’m from the hood and ain’t never seen half of those animals before,” he says. “It’s pretty dope.” His lips curl into a smile, pushing his fuzzy black mustache up closer to his nose.

McGee then starts delving into why Golden State has been such a beautiful fit for him. He lists the Warriors organization, the coaching staff, the players and even the offensive scheme as catalysts for his now-frequent smile. But there’s more to it.

“You can’t stand up for yourself when you’re on a bad team,” he says. “How does that work? I was on the Wizards one year and we won 19 games. If you’re on a losing team you can’t say shit. What are you going to do? Be like, Oh, I missed this layup because you all suck? If you’re on a losing team and say something, the media is like, He’s not focused on the team, he only cares about himself, so I tried to stay silent. Sometimes you just have to bite the bullet.”

He pauses and reaches for a cup of water on the wooden bench next to him. None of those misunderstandings, he says, show up when you’re part of a winning organization. For the first time in his life, McGee feels comfortable expressing himself in public and, suddenly, the world appears to be interested in what he has to say.

“I’m from Flint, right?” he says. “I’ve been in situations where I’ve just been walking down the street and got jumped for no reason.”

Why’s he sharing this?

“I’ve always had this thing that people I don’t know, I don’t talk to. So people thinking I’m dumb, once they get to know me they’re like, This guy is clever, witty. I’m lowkey one of the wittiest people ever. I’m quick with it, but I’m not really the, Hey, get to know me guy, so people don’t know it.”

Wittiest? Go ahead, get the chuckle out of the way. Know this, though: It’s a comment backed up by many others. The first word Fox uses to describe his former player is “intelligent.” Boyette calls him a “technology nerd” and says she’s often in awe of the work he’s able to do with different gadgets. Even West, who prior to this season had never played with McGee, admitted to being astounded by how well versed his new teammate is.

“JaVale’s an informed guy,” West says. “Whatever’s going on in the world, we’re always talking about it. The person I thought he was before I first met him, he’s not that.”

Meeting McGee, it turns out, was all it took for West to learn otherwise. There’s a good lesson there. For us, but also for McGee, a man who, like so many of us, spent years yearning for a stable home.