GREEN LIGHT: Jaylen Brown’s Got His Foot on the Gas 🚦 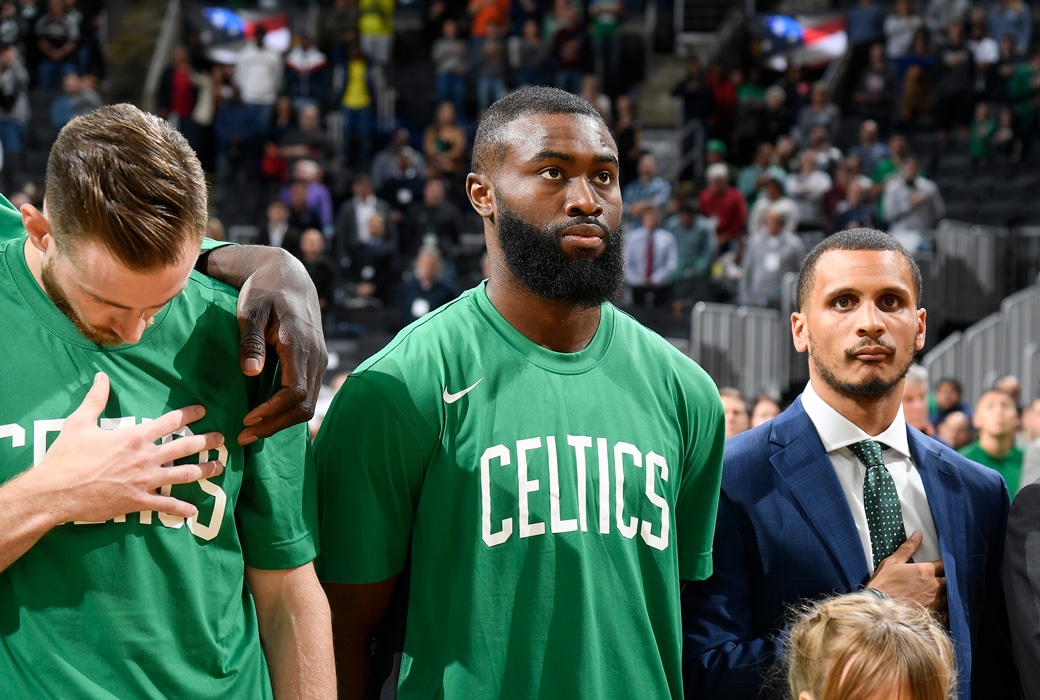 It’s about an hour before tip-off of USA-France in the quarterfinals of the FIBA World Cup, and people are slowly filing into the Dongguan Basketball Center. Jaylen Brown comes out of the locker room to go through his warm-up. He’s got his headphones on and ignores the chaos unfolding around him—teammates shooting on the same hoop, stadium announcers rowdily engaging the crowd, hundreds of local fans pointing phones in his direction, media members snapping pictures. He stays locked in on his routine, starting behind the three-point line and working his way to the paint.

The game is a physical one from the outset. Led by reigning DPOY Rudy Gobert, France tries to bully USA’s smaller frontcourt. Myles Turner gets into foul trouble and the 6-7 Brown suddenly finds himself battling inside. He’s defending big men on the post and still forcing kick outs. He’s switching off ball screens and keeping shifty guards in front of him. He’s screaming emphatically when his team gets stops.

USA gains a little separation in the second half, but France keeps the pressure on. As the possibility of an upset becomes more tangible, the buzz in the arena swells. The atmosphere is NBA-playoff-like. Between waves of deafening noise are moments of tense silence. After each basket France scores, a booming “Ohhh” echoes through the stands.

It ends rather abruptly—so abruptly that it almost feels anti-climactic. The commotion in the building dies down just as suddenly, as the dominant emotion turns from excitement to shock and ultimately to contemplation. France is really moving on to the semifinals. USA has really been knocked out.

Brown finishes with 9 points and 4 rebounds in the loss—not that he cares about his individual performance. The goal was to take gold, and the realization that it’s not going to happen is difficult to swallow. But this experience—being in this high-stakes, pressure-filled foreign environment—is one that’s valuable for reasons beyond medals, and deep down, Jaylen Brown knows that.

“When you’re out of the country for a long period of time, you get to learn stuff about people that you never would’ve known before,” Brown tells SLAM.

Shootaround in Shenzhen, China, has just wrapped up and he’s speaking about the growing chemistry between himself, Kemba Walker, Jayson Tatum and Marcus Smart—four members of the Boston Celtics who all played in the World Cup.

By the tournament’s end a week later, they had traveled to Las Vegas, Anaheim, Melbourne, Sydney, Shanghai, Shenzhen, Dongguan and Beijing together. They shared dinners, played cards and spent time wandering the different cities. Brown prefers to keep the specific “stuff” he learned across that journey private, but the point is clear. Those four are far tighter now than they were when the trip began.

That carries over to the court, too, where Brown got his first opportunity to compete alongside Boston’s new PG (Walker). Throughout the process, they became increasingly comfortable with each other’s games. In a victory over Brazil during the second group stage, Walker set up Brown a few times—once on a drive-and-kick, then on a pick-and-roll—and raved about his teammate afterward.

“He just brings so many advantages,” Walker said.

Last NBA season obviously didn’t go as planned for the Celtics. They were the odds-on favorite to win the Eastern Conference and ended up skidding their way to the No. 4 seed (49-33) and a second-round playoff exit. There was drama surrounding the team and the looming free agency of Kyrie Irving, who signed with Brooklyn back in July. Players freely admitted that the road was bumpy and they had some issues meshing. Given the prospects heading in, it was about as disappointing a year as the organization could’ve expected.

“I think chemistry is built once you hit adversity together and you got to push through it,” Brown said, a day prior to the quarterfinal against France. “We’ve been challenged multiple times on this trip. It started August 4th and now it’s September 10th, so we’ve seen a lot together.”

All told, what they saw was this: A gutsy OT win vs. Turkey, losses to Australia, France and Serbia, an injury to Jayson Tatum and countless other obstacles, on and off the floor. Having to push through each thing brought them closer.

As expected, when France took down the United States, social media became flooded with jokes about the Celtics. This World Cup, according to Twitter, did not bode well for Boston’s future at home.

The irony is, the opposite may be true.

Despite Boston’s overall struggles, Brown had a solid 2018-19 campaign. He bounced back from a rocky start and finished strong in the playoffs, averaging 13.9 points and 5.8 rebounds on 51 percent shooting from the field through nine outings. He didn’t take a giant leap forward but showed signs that he’s continuing to improve. With the amount of media attention focused on the Celtics, it can be easy to forget that Brown is merely 23 years old.

He made further strides with the national squad, filling multiple roles on a roster that lacked size and often went small. Brown actually played the 4 for much of the tournament and held his own. He secured boards inside and ran the break, dishing off to open cutters or attacking the rim himself. With Tatum sidelined by an ankle sprain, he remained aggressive offensively.

“He’s a strong player. For his size and strength, he moves well,” said USA’s head coach Gregg Popovich after their victory over Brazil. “He can really penetrate. He can catch and pull or get to the rim. He’s unselfish and will find other people. He works on defense. He’s just kind of an all-around player.”

The mental side of the game is something Brown takes very seriously as well, and Pop’s intense focus stood out to him. “He has an urgency about him and attention to detail,” Jaylen describes. “His bar is set very high. He doesn’t tolerate any excuses.”

So Brown didn’t make any, even as his responsibilities seemed to constantly change.

“At the end of the day, it’s basketball. I feel like I’m not a position player, I’m a basketball player,” he said. “4, 3, 2—whatever. Whatever coach needs me to do, I’ll make the adjustment.”

Celtics coach Brad Stevens will ask Brown to make similar adjustments this upcoming season. How the young forward (eligible for the rookie scale extension) performs at his various roles is going to be a huge factor in determining the team’s fate. His growth has been gradual but encouraging.

“[He’s improved in] just everything,” Marcus Smart told SLAM out in China. “Just overall maturity as a basketball player, on and off the court. Each and every year you see him, his mindset changes and he’s figuring it out slowly.”

A couple of reporters stand clustered in the tunnel that leads to the locker rooms at the Dongguan Basketball Center. They await Jaylen Brown, who’s still with his team following their loss to France. The arena is pretty much empty at this point and fans back home are waking up to the surprising news. It’s about 10:00 pm local time, right as the USA bus is getting set to leave, when Brown finally walks over to the media zone. He moves lethargically.

You can spot both devastation and weariness in his expression, which doesn’t waver at all. He clutches the straps of his backpack and labors to find the words to describe what’s transpired. He’s naturally soft-spoken, but right now, he has barely anything to say.

“France just played better than us tonight,” he explains. “Everybody knows what we wanted to do, and we didn’t do it. I guess you can imagine how we feel, right?”

It’s still sinking in—that much is clear. But behind his quiet tone is more than just dejection.

There’s hunger in there, too. Somewhere.