Workout complete, JJ Redick is on his way to a local Whole Foods when he answers his phone. “Picking up dinner for the next few nights,” he says as he searches for a spot to park his black Chevy Tahoe. It’s been a busy afternoon, and offseason, for the Clippers shooting guard. Such is life when your wife’s impending labor thrusts you into the role of Mr. Mom.

Take today, for example. Up at 6:30 to watch Team Umizoomi and Blaze and the Monster Machines and other Nick Jr. shows with his 2-year-old son, Knox. Then three hours at the Clippers’ practice facility. Afterward there was a trip to the bank to deposit a check from an escrow account followed by a visit to a local bike shop to fix a busted tire on Knox’s stroller. That repair, dad was told, would take 45 minutes, which is perfect because he wanted to swing by the grocery store anyway. Knox needs more yogurt and Redick needs some ingredients for the pork tacos he plans on whipping up tonight.

When he gets home, Redick will strap Knox on to the back of his bike and pedal to the park. After that he’ll make dinner, put “my boy”—always “my boy”—to sleep, say goodnight to his wife, check out some watch websites (“I’m really into Daytonas right now”), scroll through Twitter, Business Insider and HoopsHype, prepare for an episode of his podcast that will feature former New York Times writer William C. Rhoden—a man he describes as a hero of his—clean the kitchen, put away all of Knox’s toys, perhaps give in to his OCD and rearrange his watch box or his impeccably kept closet where clothes are organized by type and color, then continue his deep dive into the world of financial markets. That started because he recently watched the History Channel documentary The Men Who Built America, which triggered a JP Morgan obsession, which led to Redick wanting to know everything he possibly could about the Federal Reserve, and now he’s reading about fixed income securities and is midway through the book The Physics of Wall Street but won’t stay up later than 9:30 reading it, or anything else, because tomorrow is another day.

“My offseason is like Groundhog Day,” Redick says. “Every day is exactly the same. I love it.”

Listening to Redick is inspiring because he makes you feel like you can do anything and everything—until you realize that you actually can’t, and that Redick is clearly some sort of alien or machine, and you’re exhausted just hearing about his schedule. He’s not only one of the world’s best shooters and an All-Star level guard, but also the type of dad and husband that other dads and husbands hate because he makes them look so bad. He’s a better podcast host than many professional broadcasters. He’s so smart and so articulate and so genuinely curious about the world around him that he’s been able to become an unofficial spokesman for athletes, and he’s done all this while making sure that the job that gave him this platform and those expensive watches and fancy clothes continues to receive ample attention.

So, what’s his secret? Also, where the hell does he get the time and energy?

“My thing is, I have a standard for myself and that’s what I’m always trying to reach,” Redick says. “I certainly fall short frequently, but my standard is my standard. I want to reach it for myself, my family and the people I love.

“I don’t do it for anyone else. I don’t give a fuck about proving doubters wrong or anything like that. I’m 32 years old, have my second kid on the way. [That second kid arrived since this interview was conducted. Congrats, JJ!—Ed.] In terms of a public image—I guess I just literally don’t care at all about what other people think.” 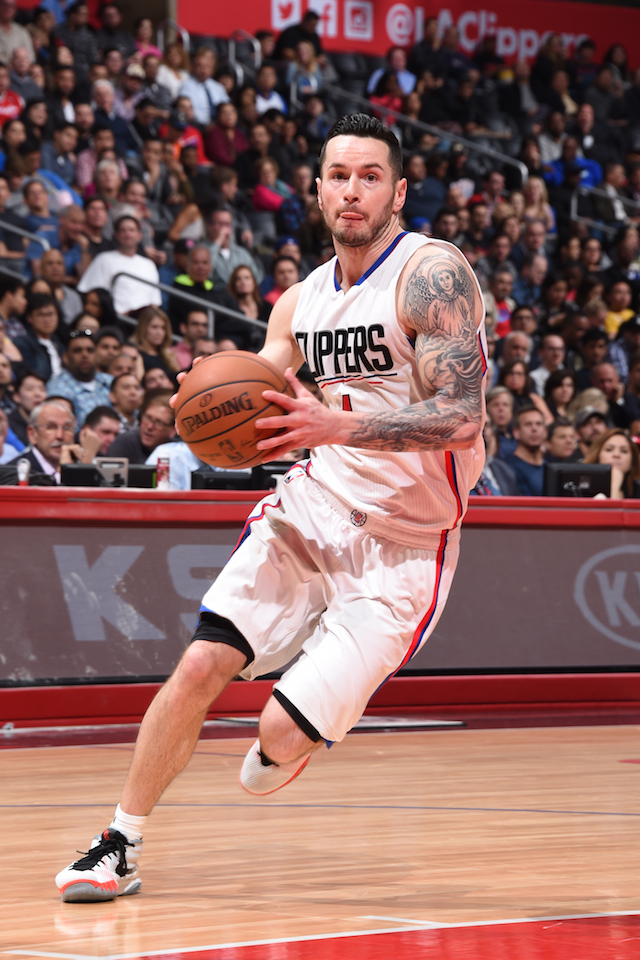 Once upon a time everyone hated JJ Redick. Everyone hates the preppy white shooters from Duke, right? He also had a sweet jumper and a ceaseless motor, though, and a bit of an attitude, all of which allowed him to graduate as the ACC’s leading scorer in 2006 but also transformed him into the most loathed athlete in the country.

Back then opposing fans would regularly lob verbal grenades at him. “There’s literally nothing you can say about me or any member of my family that I haven’t heard before,” Redick says. Much of the venom was unwarranted, though Redick wasn’t perfect either. “JJ could, and sometimes would, have beers the night before a game in college,” says Redick’s friend and former Duke teammate Shavlik Randolph. “And yet he’d still be the best player on the court the next day.”

Redick, by his own admission, entered the NBA brash and cocky. He and others say he was unprepared for the League, both physically and emotionally. He was arrested and charged with driving under the influence in June of 2006, weeks before being drafted by the Magic. He spent more time on the bench than the court in his first three professional seasons. On offense he was too easy to guard. On defense he was too easy to blow by. It took him until 2010 to find his place in the League—as a sharpshooting role player who, on defense, could use his IQ to make up for his lack of lateral quickness. In 2013 he signed a four-year, $27 million contract with the Clippers to become one of the League’s top 2-guards as well as an irreplaceable cog on a contending team.

And, yes, Redick believes the Clippers are a contender. Every offseason he has a “thing” that he works on. “I’m not trying to add lots to my game,” Redick says. “Instead I’m always looking to become a better shooter, and add one more weapon.” Last year the “thing” was runners and floaters. This year it’s shooting off the dribble, especially going left off screens. All of it, of course, is mapped out beforehand.

The day I speak with Redick, for example, is a Tuesday. Tuesdays in the offseason are catch-and-shoot days. On Wednesday the focus will be dribble hand-offs. Saturday is all about spot-ups; he has to knock down exactly 342 shots before leaving the gym.

“The way I look at it,” he says, “is if I can add one little thing to my game, and that thing gives us one or two additional wins over the course of the season—well, that means it was worth it.”

Forget basketball for a moment, though. Sure, Redick is a career 41 percent three-point shooter and coming off a season in which he drilled a career-high, League-best 48 percent of his shots from deep, even though he now draws so much attention that the majority of his looks come over outstretched arms. If you’re reading this magazine, then you’re already familiar with Redick’s picturesque stroke and basketball reinvention, so let’s move on to some things you might not know about JJ Redick.

“He’s a really good rapper,” Randolph says. “We were at Duke around the time 8 Mile came out and so we’d have battles around the dorms all the time.” Talk to Redick and his friends and you’ll quickly learn that movies play a major role in his life. In college he earned the nickname Redick and Ebert. Quotes from Swingers, The Waterboy and Wedding Crashers routinely make their way into his conversations. One of the many childhood friends whom he’s still close with, Daniel Payne, made sure to quote the latter— “true love is the soul’s recognition of its counterpoint in another”—while giving a toast at Redick’s engagement party.

“But that was before he traded in the baggy sweats for tight dark jeans and other items from the Russell Westbrook Collection,” Payne says. “If I made a speech today I’d be sure to mention his new wardrobe.” Not surprisingly, Redick’s new love for fitted pants and exotic shirts has drawn the attention of those who have known him for years.

“The jeans have definitely gotten skinnier and darker,” says Tom Hagan, another longtime friend. Adds Chris Collins, the current Northwestern head coach and former Duke assistant who recruited Redick to Durham, “It’s especially funny because he’s a kid who grew up in a log cabin in Roanoke, VA, and now he’s dressing like a model.”

For a moment, though, let’s use the new and improved wardrobe as a metaphor, one that perfectly sums up who JJ Redick is and how he’s managed to morph from borderline NBA player into Championship-team-level-starter, from despised college kid into the NBA’s equivalent of Prom King.

Think of it like this: When Yahoo! reporting wizard Adrian Wojnarowski was looking for an NBA player to host a podcast on his new network/website, The Vertical, Redick was the one he tabbed. When Bill Simmons wanted an NBA player to come on his new HBO show and talk about Kevin Durant’s decision to sign with the Warriors, it was Redick who garnered the invite. It’s not just high-powered media members, either. Redick’s Twitter mentions are filled with messages from former antagonists confessing that their former hatred has given way to love.

And really, who can blame them? The tabloids are littered with examples of individuals who’ve sold their souls in pursuit of riches. Redick, on the other hand, is the rare L.A.-based famous person who’s managed to successfully toe that ever-so-thin line. Think of his clothes: They might have changed over the past half-decade as both his fame and bank account have grown. But the core of the man wearing them, well, he’s still the movie-quoting, book-reading, hard-working, fun-loving person who goes to bachelor parties with childhood friends and perks up when asked about subjects like parenting and a college Anthropology class.

Of course, none of this fawning matters to Redick. He doesn’t care what we think about him. Men worthy of such praise rarely do.