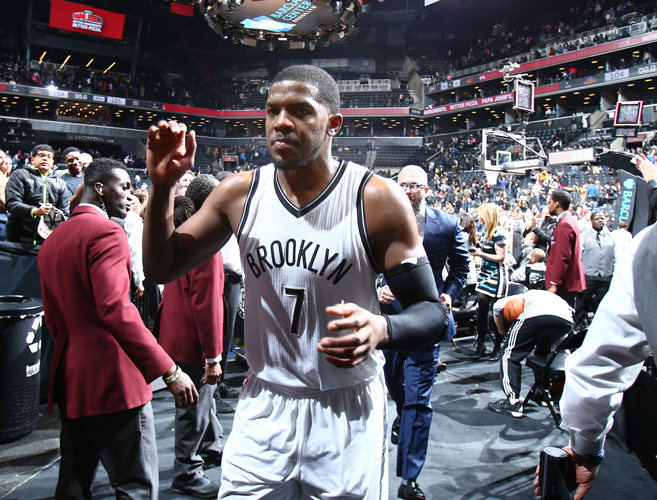 The Charlotte Hornets opened the first quarter of their game against the Bulls on Monday night with a whopping 38 points, outscoring their opponents by 18. That lead never totally diminished as Kemba Walker (30 points, 8 assists), Nic Batum (19 points, 13 rebounds, 8 assists) and the rest of the Hornets took care of business at home.

Besides 2-0 in the opening seconds of the game, the Sacramento Kings never led in this one…on the road versus the Cleveland Cavaliers definitely presented its challenges. Firstly, LeBron James. In only three quarters, the King earned his fortieth career triple-double (21 points, 10 rebounds, 10 assists).

The Black Mamba tried to put on a show his last night in Indy, scoring 19 points. Lakers’ rookie, Julius Randle (15 points, 19 rebounds) added a strong double-double. But their and the rest of the Lakers’ efforts were of no avail on Monday night. The Pacers were simply the better team. Many thanks to Paul George who scored 6 points in the final 2 minutes after Bryant’s three 3-pointers put Indiana in a little hole.

With 23 points and the game-tying 3-ball that took this game to OT, JJ Redick is the guy to thank. His Clippers overcame a 19-point deficit, their largest this season, crushing the Philadelphia 76ers’ dream of consecutive wins.

Joe. Johnson. Dude still has it…and he wants you to remind ya’ll. Just check out his game-winning three-pointer at the buzzer up top. Or, check how he broke Jusuf Nurkic’s ankles. It may only be a tiny one-night win for the struggling Nets, but it made for a good time nonetheless.

With their victory over the Detroit Pistons on Monday, the Toronto Raptors have now won 14 of their last 15 games. Kyle Lowry led the North with 25 points and 7 assists, and Terrence Ross added 19 off the bench. Ersan Ilyasova was the high-scoring man for the Pistons with 17 points, and Andre Drummond added the 12-point, 13-board double-double. Plus, he did this:

The Orlando Magic climbed back from a 20-point deficit for a win in OT against the Atlanta Hawks on the road. Nikola Vucevic finished with 28 points, 13 rebounds and 6 assists to lead Orlando, and Elfrid Payton added in 20 points. Al Horford was the high-scorer for the Hawks with 27 points, but the Magic finished the overtime period 16-9 to steal the victory.

Damian Lillard finished with 33 points to carry the Trail Blazers to victory over the Grizzlies on the road. CJ McCollum added 21 points (6 of which came in OT), as Portland overcame Mike Conley and Zach Randolph’s combined 53 points, bumping up their even record to a winning one.

Karl-Anthony Towns earned another double-double with his 19 points and 12 rebounds on Monday night, including this poster:

However, he and his Timberwolves weren’t able to get a win. Anthony Davis (27 points, 8 rebounds), Jrue Holiday (27 points, 9 rebounds, 6 assists) and the rest of the Pelicans were too much of a challenge when they visited the Wolves up in Minnesota.

After struggling with his shooting early on in OKC’s game versus Phoenix on Monday, Kevin Durant found his touch right in time. He nailed his last six shots (four of which were 3-pointers), as the Thunder beat the Suns on the road. KD finished with 32, and Russell Westbrook (our latest cover subject) added in 29, plus one of these that’s always a good time: