Joe Johnson Unhappy With Number of Shots in Game 4 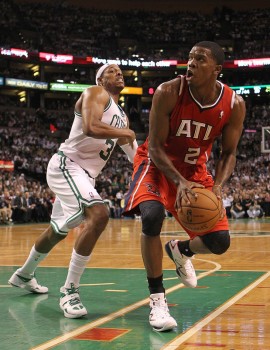 In taking a commanding 3-1 series lead this past Sunday, the Boston Celtics humiliated the Atlanta Hawks, beating them by 22 points. Joe Johnson was not a happy man after the game, and he wasn’t just irked by the final score.

Johnson was unhappy with the amount of touches he got in Game 4, and it’s clear that he needs to play a much larger role in the offense with the Hawks now facing elimination.

Johnson took just eight shots in the 101-79 loss to the Celtics, who are up 3-1 in the best-of-seven series heading into Game 5 Tuesday at Philips Arena. “I don’t think they are doing anything different defensively on me,” Johnson said. “I think it’s just basically getting an opportunity to touch the ball. That’s it.” When asked if he was not happy with his touches, Johnson answered with a simple, but emphatic, “No.”

“We run a lot of things through [Johnson],” head coach Larry Drew said following a team meeting Monday. “He’s got to be more aggressive in working to get his shots and we have to be mindful when he hasn’t had a shot in one or two trips down the floor, we’ve got to get him the ball.” Drew credited the Celtics’ defensive game plan against Johnson. While Paul Pierce has drawn the bulk of the assignment, the Celtics have also used double-teams, switches and crowding on the Hawks’ all-star to make things difficult. The Hawks have also failed in their offense, according to Drew. “Just watching the film in flying back [Sunday] night, there were a number of situations where we could have just made one extra pass and the extra pass would have been to him,” Drew said. “We’ve just got to be a little bit more mindful to make sure he is getting touches.”

Eight shot attempts for the team’s best player obviously isn’t going to get it done, but the onus is on both Joe Johnson and the Hawks’ coaching staff to correct this, and to do so immediately.