John Paxson Explains the Value of Derrick Rose to His Coach 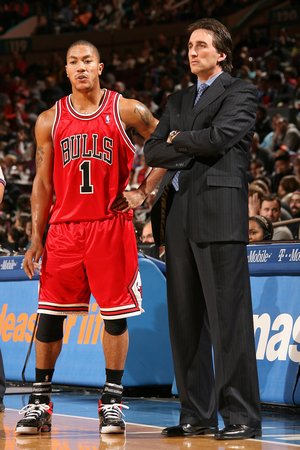 Vinny Del Negro apparently needs someone to explain to him the obvious things in life. Such as the sheer awesomeness of his rookie point guard, and the benefits that he can provide to the team in the late stages of a game.

And that someone is his boss, John Paxson. From the Chicago Sun-Times:

Bulls general manager John Paxson has made it clear to coach Vinny Del Negro that rookie point guard Derrick Rose should be on the court at the end of games. ”I’ve talked to Vinny about this,” Paxson said Saturday during the WMVP-AM (1000) broadcast of the Bulls’ 105-102 victory over Houston, in which Rose scored 16 of his team-high 22 points in the fourth quarter. ”Our future is Derrick. That’s no secret. There are times that I feel — and Vinny knows this — that he should be on the floor at the end of games.”

Paxson’s remarks came after a week in which Rose was pulled late for Kirk Hinrich, a decision Del Negro defended at first, saying it was his to make as ”the decider.”

I love that Del Negro used a Bushism when explaining his rationale for playing Hinrich in favor of Rose late in a game.

Sorry, Vinny. Looks like the “deciding” is being done by someone else now.