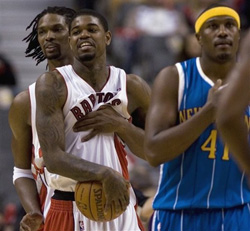 Following one of the Raptors first preseason games this fall I arrived at Amir Johnson’s locker to find out he had bitten through his lip only to return to the court shortly after the doctor finished cleaning him up.

The following game when I walked over to his locker to chat with him I noticed he had stitches above his right eye after his head was rudely introduced to the elbow of a teammate. Clearly the Raptors’ new big man wasn’t afraid of mixing it up in a relatively meaningless game, even if it amounted to be

nothing more than an audition for playing time.

“It was crazy,” Johnson told me after the first preseason game which saw him need stitches. “I got ‘bowed in the mouth and the foul was on me. I’m good now and I could have kept playing with the stitches but they said my tooth went through my lip. I didn’t realize that until I was in the back and they told me I needed to get stitched up.”

How many players in the NBA would brush off getting stitches in back-to-back preseason games and rush back to the court? Not many. Yet Johnson loves his role with the team and is happy being known as a hustle guy who comes off the bench to give the team an infusion of energy.

As the season has progressed his minutes have increased because his energy levels haven’t dwindled. On Friday Johnson scored a team-high 18 points and he followed that up on Sunday by grabbing a team-high 12 rebounds.

By playing with boundless energy this season he’s carved out a role his teammates have grown to admire and respect.

“It’s good to have guys who just want to hustle out there,” Chris Bosh explained, when asked what it’s like to play with a high-energy guy like Johnson. “Guys who just go hard to the boards, lay it out there on the line on defense and just play hard. I think it makes the game a lot of fun anytime you get to play with guys like that.”

One of the many qualities that is easy to admire about Johnson is he finds the game of basketball fun and almost always plays the game with a smile.

When he was thrust into a starting role in Detroit last season he often found himself in foul trouble. But coming off the bench in Toronto it allows him to play at a high level for shorter bursts and not have to worry about finding himself in foul trouble. Because of this chance it’s allowed him to play with a bit more youthful exuberance that he wasn’t able to unleash last season when he was expected to play 30-plus minutes a night.

Playing with a lot of energy doesn’t mean he’s afraid to battle in the paint. Despite being 6-9 and a lithe 210 pounds he loves to crash the glass and mix it up with opponents on defense.

To fully appreciate this you need to put this feat in the right perspective: The teams third string point guard, Marcus Banks, is 6-2 yet weighs 10 more pounds than Johnson. This means that when some opposing guards like Dwyane Wade or even a spindly Brandon Roy come barreling through the paint Johnson is at a disadvantage when the two bodies collide.

Heck, even rookie point guard Tyreke Evans has 10 pounds on him.

Yet even with facing a height and weight advantage when battling under the bucket Johnson relishes his role.

“When I come into the game I know my role and what I have to do which makes it easier on me to contribute,” Johnson explained. “When I get into the game I run the floor, set screen and rolls and get my other teammates open. Once you get into a groove like I’m in the game just comes easy to you.”

Grabbing rebounds, playing gritty defense and being a hustle player is one thing, but to stick him with that kind of label doesn’t do his game justice. Sure, Johnson loves to dive on the floor for loose balls, mix it up in the paint and lead the team in rebounds, but his game is about more than just doing the dirty work. He’s taken the countless l

essons he’s learned from playing alongside veterans like Rasheed Wallace, Theo Ratliff, Dale Davis or Antonio McDyess and he has implemented those things into his own game.

Small stuff like taking away passing lanes, better utilizing spacing within the offense for himself or his teammates and making timely cuts within Toronto’s offensive sets is allowing him to make a big impact on the court for Toronto.

Fans in Toronto may not have noticed all the small things he does on the court but the coaching staff has definitely taken notice.

“I think he does a bunch of the little things for us,” Triano explained to me last weekend. “He runs the floor hard all the time and he sets screens and rolls to the basket hard. People have to respect that or if they don’t he lays it in. When you make hard cuts different guys have to help guard you and the frees up one of your teammates. It’s a stat that doesn’t really get noticed or rewarded but a good hard cut can open up a teammate just as easily as a good pass or a good screen.”

Heading into the season the majority of the people who covered the Toronto Raptors assumed Rasho Nestorvic and Reggie Evans would eat up the majority of bench minutes behind Chris Bosh and Andrea Bargnani, leaving Johnson to live off the scraps left over from those four players. But Johnson had a different idea for how the season would unfold and through a lot of hard work he’s been able to carve out a role for himself as Toronto’s first big man off the bench most nights.

Sure, he’s been helped by Reggie Evans missing all of the season so far due to a sprained left foot, but the case can easily be made that Johnson will continue to secure minutes as the teams back-up center even after Evans returns due to the toughness and intangibles he brings to the team.

Due to all the intangibles he’s brought to the team so far this season it wouldn’t be a surprise if Johnson is still the first big man off the bench once Evans returns to the court in the next few weeks.